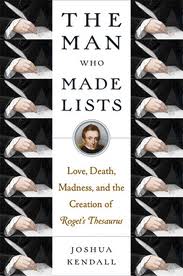 I browsed recently through a biography I picked up at the public library, Joshua Kendall’s The Man Who Made Lists: Love, Death, Madness, and the Creation of Roget’s Thesaurus (G.P. Putnam’s Sons, 2008).

Happily having used Roget’s Thesaurus – that incomparable list of synonyms and antonyms — throughout my writing career, I realized I didn’t know anything at all about its compiler, Peter Mark Roget (1779-1869). I’d never even wondered why someone with a French surname had written a book on the English language. Neither did I know when it was first published. Roget’s was simply a book of synonyms that was always there, that people knew, and used – especially when solving crossword puzzles or writing essays — and that was that. Right? I was also grateful to him, very grateful, because he so alleviated (whew!) my monologophobia (the fear of using the same word twice in a piece of writing).

But, seriously, who was this lexicographer who’d produced such a seminal work?

Author Joshua Kendall, a journalist who describes himself as a “word nerd”, tells a fascinating and dramatic story, one well worth reading. (His current project is the biography of another word nerd, America’s Noah Webster.)

Roget began his career as a medical doctor, but went on to many accomplishments, among them his invention of the slide rule, his role in nitrous oxide/laughing gas experiments with Thomas Beddoes, developing filtration systems for London’s sewers, posing the first chess problems for newspapers, his work on optics (that led some to link his name in a later century with moving pictures), his popular lectures on anatomy and other scientific subjects, and his wealth of writings on physiology and health. In 1834 he became the first Fullerian Professor of Physiology at the Royal Institution and he was a founder of the Society for the Diffusion of Knowledge.

My curiosity having been aroused, I began to read the book, especially interested in the tantalizing promise of the love and madness part, as a writer of romantic fiction and as the biographer of a famous courtesan.

First, his ethnicity. The Rogets were French-speaking Swiss from Geneva. Jean Roget, his father, was the minister of a Protestant church in the Soho neighborhood of London, which had a large Huguenot (French Protestant) population in the 18th century. His mother was from a wealthy middle-class Huguenot family; her mother Margaret Garnault, was an heiress, and her father Peter Romilly was a well-off jeweler. His mother’s brother, the highly respected Sir Samuel Romilly, had a distinguished career in government.

But there were serious health problems – mental as well as physical – in the Roget and Romilly families. The mental illness was in the Romilly family; Roget’s maternal grandmother, Margaret, was an unstable personality who needed constant supervision. Roget’s father’s problem fell into the physical realm: he developed tuberculosis. This necessitated a move back to Switzerland, where treatments for the condition were considered better. The infant Peter was left with his maternal grandparents, and when just a toddler he was taken to Switzerland by his uncle Samuel to be with his parents and new baby sister Annette. But all was not well with his parents. His mother may have been suffering from post-partum depression after Annette’s birth, and when his father finally succumbed to TB after four years, she fell into a sharp mental decline.As Kendall observes, “Madness ran in the immediate family. [His maternal grandmother] … suffered from an unidentified mental disorder – probably severe depression or schizophrenia – that left her in an almost vegetative state for most of her life.”

Roget’s mother, who was described as “temperamental and emotionally demanding,” lapsed into paranoia in her old age.Alas, it didn’t end there. Roget’s sister Annette – and, later, his daughter Kate – also suffered from severe bouts of depression. And his kind uncle Sir Samuel Romilly, longtime Member of Parliament and internationally renowned reformer of the system of British criminal law, among many other legal triumphs, fell into a deep depression and committed suicide in 1818. 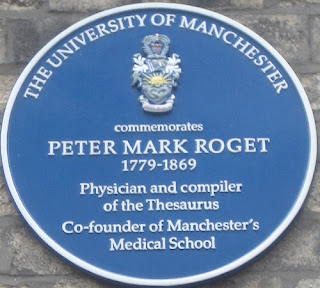 By this time, Peter Mark Roget, almost 40 years of age and unmarried, had a thriving medical practice and had become a member of the Royal Society; he was the one called to his uncle’s bedside. Sir Samuel had slashed his throat with a razor, inconsolable after the death of his wife, whom Roget had attended in her last, fatal, illness. (This incident is described in tragic detail in the opening pages of the Kendall biography.Sir Samuel’s demise was a great loss to his family and to the nation. A good part of the blame for his suicide, alas, was attributed later to the insensitivity of the medical treatment of his nephew, Peter Mark Roget. This blame, unfortunately, may well have been warranted.Kendall states “no one questioned Roget’s concern for his uncle” but “a consensus emerged that he had failed to grasp the full extent of Romilly’s emotional agony” upon the loss of his wife. But, again, severe depression ran in the Romilly family, and perhaps no physician could – at that time – have done anything to alleviate Roget’s uncle’s grief and deterred him from suicide.

Samuel Romilly’s suicide unhinged Peter Mark Roget for a good long while.
According to Kendall, the tragedy – and the guilt — caused Roget to undergo what Kendall dubs “a midlife crisis.” He left the medical profession and pursued a second – and hugely more successful — career as a lecturer at the Royal Institution.