Cast your eyes along our recently acquired panorama of London, painted around 1815 by Pierre Prévost. As an added twist, we've pointed out where some more modern buildings now stand. On display 15 March.

P.s It's 20 ft long, so perhaps grab a cuppa. pic.twitter.com/QfzL3OeUzM

A very exciting exhibition featuring a Panorama of London begins March 15  at the Museum of London, and will run until September 2019.  This extraordinary work was executed as a study for a panorama that was shown in Paris from 1816-1819 by artist Pierre Prévost. The full-sized work, several times larger than these studies, is now lost. One newspaper referred to the work as “London as the Duke of Wellington would have seen it.” Others have noted it is the London Jane Austen knew. 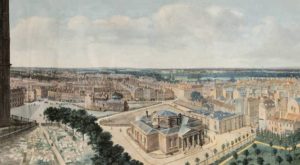 The first view in the scan above looks west from the edge of Westminster Abbey (at the left edge); the large building in the center, above, is the now-demolished Middlesex Guildhall and in the distance is St. James Park, and in a better reproduction, you can see Buckingham House, the palace, as it was in 1815. 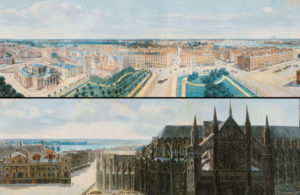 Above, the studies split in half. The top image is west and north; the bottom image is east and south.

A PANORAMIC VIEW OF LONDON, FROM THE TOWER OF ST. MARGARET’S CHURCH, WESTMINSTER
Watercolour and bodycolour over pencil, squared for transfer in pencil, the squares numbered, on multiple sheets of paper laid onto canvas 850 by 6050 mm. 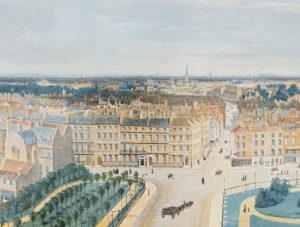 Looking north up Whitehall, the Banqueting House is seen at the curve; the steeple in the distance is St. Martin’s-in-the-Fields but Trafalgar Square which it faces today, was not yet created. The Sotheby’s Catalogue states, “To the centre of the composition, one can see the only remaining component of the Palace of Whitehall, the Banqueting House. Designed by the leading English architect Inigo Jones (1573-1652), the Banqueting House was commissioned by Charles I; in 1649, just 27 years after its construction, it was the site of his execution.  The neoclassical St. Martin-in-the-Fields stands nearby. The site of a church since the medieval period, this had been re-built by James Gibbs in the 1720s. Prévost’s view shows the area prior to the construction of Trafalgar Square in the 1820s, and the church of St. Martin-in-the-Fields would therefore have appeared considerably different to how it does today. Contemporary accounts of the area describe the church as crowded in by surrounding buildings, which detract from the impressive nature of Gibbs’ edifice.” 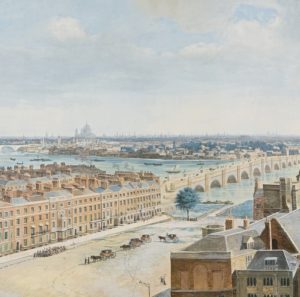 Above, looking northeast, beyond Westminster bridge one see the City, mercifully shorn of its tall buildings with the outline of St. Paul’s Cathedral on the horizon slightly left of center. 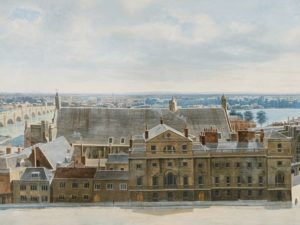 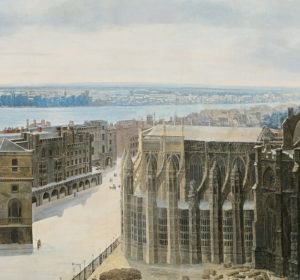 The final sections, above and below, feature Westminster Abbey in its smoke darkened coating.

In the Georgian era, panoramas were popular exhibitions. The first opened in London in 1792 and according to The Guardian, viewers paid three shillings to view the painting which curved around a room “dramatically” lit.

In preparing this post, I was surprised to learn that the Museum of London is planning to move its entire Barbican operation to a new site in the old Smithfield Market, also located in the City of London. No doubt they will construct a fine exhibit space for this painting when they complete their plans and move, sometime in the next decade.

Being from Milwaukee, Wisconsin, I have occasionally run across the stories of the German Panorama Painters who came to the city in the mid-19th century and painted many of these works installed in various cities.  The only remaining one I know of is in Atlanta,  Georgia, and recently reopened as the Cyclorama in the Civil War Museum.

However, the only panorama I have ever seen is the one that still exists in Waterloo, Belgium, picturing the famous battle in 1815 when the Duke of Wellington led the Allied forces to victory over the emperor Napoleon, pictured below. 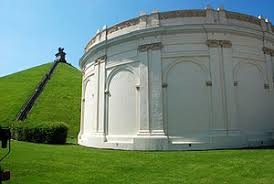 More details  about the London Panorama from the Sotheby’s  catalogue:

“Of extraordinary size, detail and topographical accuracy, this view of London is a remarkable preparatory study for a lost panorama of approximately 30 metres in diameter, by Pierre Prévost, which shows the artist at the pinnacle of a highly successful career as a panoramist …. The illusion of depth, height and distance is testament to Prévost’s ability to work on such a large scale, and this complete, circular image, joined at Westminster Abbey, is one of the finest drawings of its type to have survived….

“By 1800 panoramas could be viewed in many European capitals. The works were usually exhibited for a short period of time in a rotunda, before travelling on, and ultimately were replaced or sold. The nature of this process has ensured the rarity of the completed panorama, as excessive handling and transportation in most cases resulted in their ultimate destruction.”

The Sotheby’s catalogue entry states: “While the final canvas created by Prévost would have been very much larger (it was exhibited in a purpose built rotunda on the rue Neuve Saint-Augustin in Paris, measuring 32 metres in diameter, over five times the size of this preparatory drawing), even this preliminary study is of an impressive size, and is highly finished ….

“The street scenes in the foreground bring a sense of life to the panorama, and allow the viewer to engage fully with the daily activity of the city’s inhabitants….Here, shops and professions are indicated in the foreground in remarkable detail. On Great George Street, the road running horizontally across the centre foreground, the shops include a wine and brandy merchant and a solicitor, whilst on Bridge Street, which runs towards Westminster Bridge, an apothecary, a shoe-maker and a children’s clothes store are indicated. ”

I hope many people enjoy seeing the London Panorama of 1815.