The Duke of Wellington died at Walmer Castle on September 14, 1852

“The Duke of Wellington was Lord Warden (of the Cinque Ports) for nearly four and twenty years, and during all that time rarely missed coming to Walmer after the prorogation of Parliament, staying usually till about the middle of November; and, before leaving for Strathfieldsaye, generally held at Dover a Court of Lodemanage, to discuss and settle the affairs of the Cinque Ports’ pilots.

” . . . The Duke was accustomed to rise early, but, on September 14th, 1852, when his valet called him as usual at six o’clock, he found the Duke particularly drowsy, and thought it best to leave him undisturbed for an hour longer. He therefore withdrew, but remained within hearing. It was fortunate he did so, for soon after he was alarmed at hearing groans from the Duke’s room, and on re-entering was requested to send for Dr. Hulke of Deal, who came, prescribed some simple remedies, and, seeing nothing serious in the Duke’s condition, departed. Shortly after this, however, the Duke became much worse, and messages were despatched for further help. On the return of Dr. Hulke with his son and Dr. McArthur, they found his Grace breathing laboriously, unconscious, and very restless. To assist respiration he was raised and put into his easy chair, where for a time he breathed more freely; but the end was very near, and at five and twenty minutes past three he expired. A message had meanwhile been sent to London for Dr. Williams, who only arrived in time to find the mortal remains of his illustrious patient laid out upon his little camp-bed.

“The Union Jack now drooped at half-mast high upon the castle ramparts; announcing to the world that the Iron Duke, the nation’s idol was no more. The body of the departed hero remained at Walmer Castle until the eleventh of November, in the irregularly-shaped room shown in the engraving; which still retains the name of “The Duke’s Room.” The scene at Walmer, subsequent to the removal, cannot be better described than in the following extract from a contemporary record, which conveys a most graphic idea of all the solemn proceedings of this time :—” In the small irregularly shaped death-chamber lay the body of the Duke, inclosed in an outer coffin covered with crimson velvet, and with handles and funeral decorations richly gilt. On the lid, near the head, rested the ducal coronet, and beyond it the pall, gathered back, to give visitors a complete view. The coffin rested on a low stand, covered with black cloth, round which candelabra with huge wax lights and plumes of feathers were arranged. The walls and roof of the small apartment were, of course, hung with black cloth, the single deep-recessed window closed, and candles, reflected against silver sconces, barely relieved the gloom of the sombre display. Visitors entering at one door passed by the end of the coffin, and then out at another without interruption. The ante-chambers and corriders were also darkened, hung with black, and lighted with candles placed at intervals on the side walls.

“The first day for admission of the public was Tuesday (Nov. 9th). Through the low strong archway of the entrance the visitors passed, first, along the curved glass-covered passage, then through the dimly lighted anterooms into the chamber of death, and then along corridors and down staircases and across the garden on to the beach. All the way at a few paces distance from each other on either hand, the guard of honour of the Rifle Brigade were placed, each man with his arms reversed, and leaning in a sorrowful attitude on his musket. Along the beach, as far as the eye could reach towards Deal, a long train of visitors dressed in mourning passed and repassed throughout the day, while from greater distances conveyances arrived and took their departure in quick succession.

“The stream of visitors continued throughout the Tuesday, and until four o’clock in the afternoon of the following day; during which time upwards of nine thousand people are said to have visited the chamber of the late Duke to witness the lying in state. But about 7 p.m. on Wednesday (Nov. 10th), the body was removed to Deal Station, en route for London, under an escort of about 150 men of the Rifle Brigade, commanded by Colonel Beckwith, and attended by mourning coaches in which were seated the Duke’s eldest son and successor, Lord Arthur Hay, Captain Watts, Mr. Marsh of the Lord Chamberlain’s office, and others. 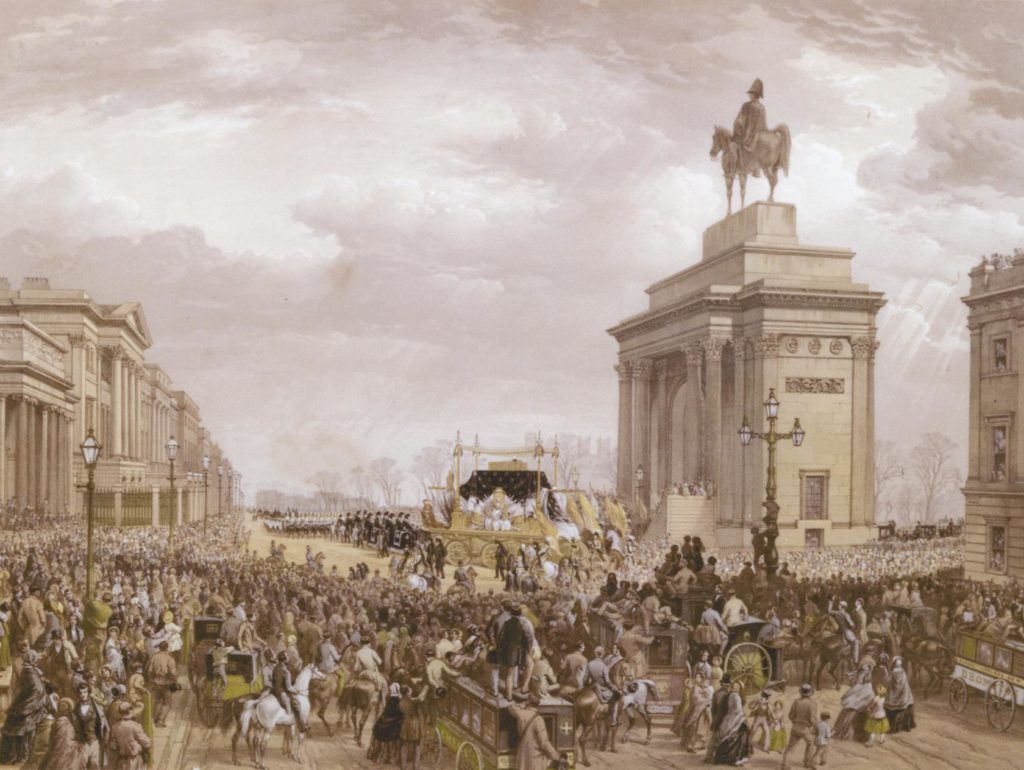 “As the funeral cortege prepared to leave the grounds, the solemn booming of the minute-guns resounded from the castle walls; while the wind brought back the echo from Deal and Sandown, where the like honour was paid to the memory of the deceased. Down the “sombre avenue,” lighted by the lurid glare from the flambeaux with which a body of men led the way, and through the silent crowds who lined the road undeterred by chill darkness of a November night, winded the slow procession; moving with measured tread, until at length they reached Deal Station; the melancholy march of a mile and three-quarters having occupied no less than one hour and a half. There they were awaited by Mr. James Macgregor, M.P., the chairman of the South-Eastern Railway Company; and the hearse having been transferred to a truck, the journey onward to London was resumed at a quarter past nine.

“On arriving at the Bricklayers’ Arms station, the hearse with the coffin was removed to Chelsea Hospital, under an escort of the 1st Life Guards; and there the remains of the Duke continued to lie in state till removed for the Grand State Funeral which took place on the following Thursday, November 18th. 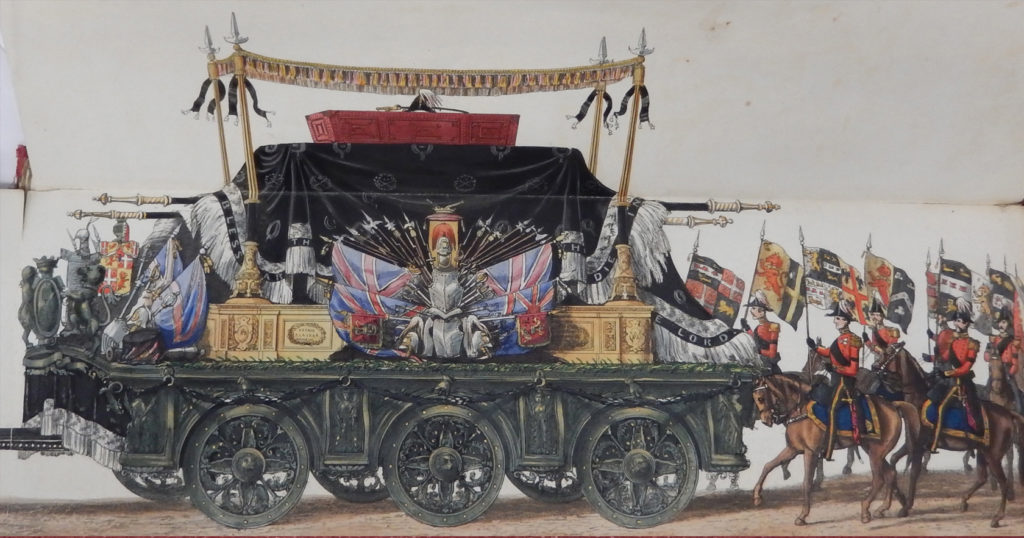 “In 1861, shortly after the appointment of Lord Palmerston (as Lord of the Cinque Ports), several articles were removed from (the Duke of Wellington’s room at Walmer) to Apsley House, with the consent of Lord Dalhousie’s executors, in consequence of a threatened sale by auction; but these have all been recently restored, through the generosity of the present Duke of Wellington, as related further on; and “The Duke’s Room” is once again as it used to be, even to the yellow moreen curtains and the orignal bedding and chair-cover. The bookshelves have, however, been wisely covered with glass doors, and so converted into a cabinet, in which many articles of interest are kept under lock and key; including the Duke’s set of his own printed despatches, in twelve vols., the first volume of which has been despoiled of its title-page by some thief, or thievish collector, for the sake no doubt of the autograph. This cabinet also contains, among other things, two pairs of “Wellington” boots, and a volume of Statutes relating to the Cinque Ports, of the date of 1726. The latter was presented to the Duke of Wellington by Lord Mahon, and contains the autograph of each. One pair of the “Wellingtons,” described in the schedule of heirlooms as a pair of “Field Marshall’s ‘Wellington’ boots,” are believed to be the same that were worn by the Duke at the Battle of Waterloo. The famous camp-bedstead has now a green velvet coverlet, presented by the Countess of Derby in 1893. 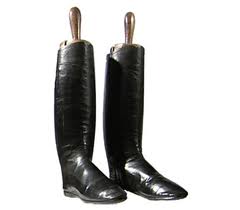 “The engravings in this room include portraits of Mrs. Siddons, Mr. Burke, and Lord Onslow, as well as the Duke’s print of the Chelsea pensioners reading the Gazette announcing the victory at Waterloo; and in the adjoining dressing-room, is a curious piece of work, made by the Duke’s house carpenter and shown at the Exhibition in 1851, being the representation of Strathfieldsaye House, in the form of a picture, composed it is said of 3,500 pieces of wood. The Duke of Wellington thought so much of this picture that it used to hang during his lifetime in the dining-room.”

1 thought on “THE DEATH OF WELLINGTON AT WALMER”