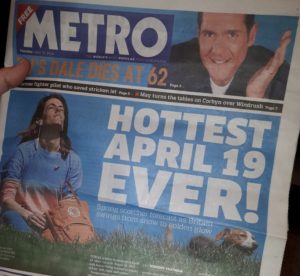 You may recall that in my last post about my recent trip to England, Sandra Mettler and I spent my first day in London touring the City on the Hop On, Hop Off bus. It was a glorious day, and the summer weather continued, as you’ll see by the headline above. Having spent the past thirty years living in Southwest Florida, 27c (or 80 fahrenheit) was a nice cool down for me and Sandra was just happy to be out from beneath the snow piles she’d left back home in Wisconsin.

So next day, we decided to take the train out to Blenheim Palace, as I hadn’t been there before, believe it or not. In addition, they were holding an antiques fair on the grounds that weekend. 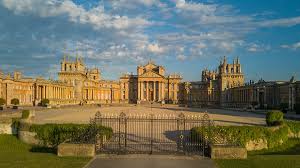 Blenheim Palace, above, was gifted to John Churchill, the Duke of Marlborough, as a reward from a grateful nation after his victory at the Battle of Blenheim in 1704. Of course, there’s a lot more to the story, which you can read here. Likewise, the grateful nation wanted to gift the Duke of Wellington with a similar “Waterloo Palace” after his victory at that battlefield two hundred years on. The government said they’d like to give him something along the lines of Blenheim and, upon hearing that Wellington had never seen Blenheim, a contingent of ministers took him out to Oxfordshire to rectify that oversight. As I looked at Blenheim for the first time, I could only imagine Wellington’s face as he took it all in. Ever practical, his answer to their offer of a similar pile was, “Oh. Hell. No.” Or words to that effect. Instead, he chose Stratfield Saye, already built and much more in the style of a family home.

Here are some bits of the Blenheim facade in photos I took on the day. I couldn’t fit it all into a single frame . . . . 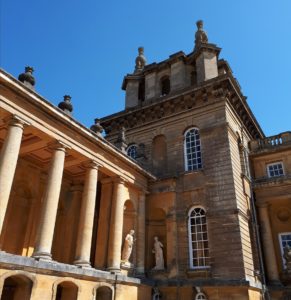 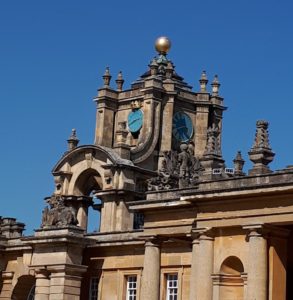 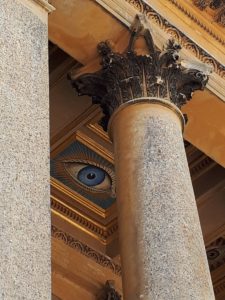 The ceiling of the entry portico is decorated with six eyes: three blue and three brown and all of them left eyes. They were painted in 1928 by artist Colin Gill based on strict instructions from Gladys, the beautiful, American, eccentric 2nd wife of the Ninth Duke of Marlborough.

And the dining room is set up in what should naturally be the entry foyer . . . . 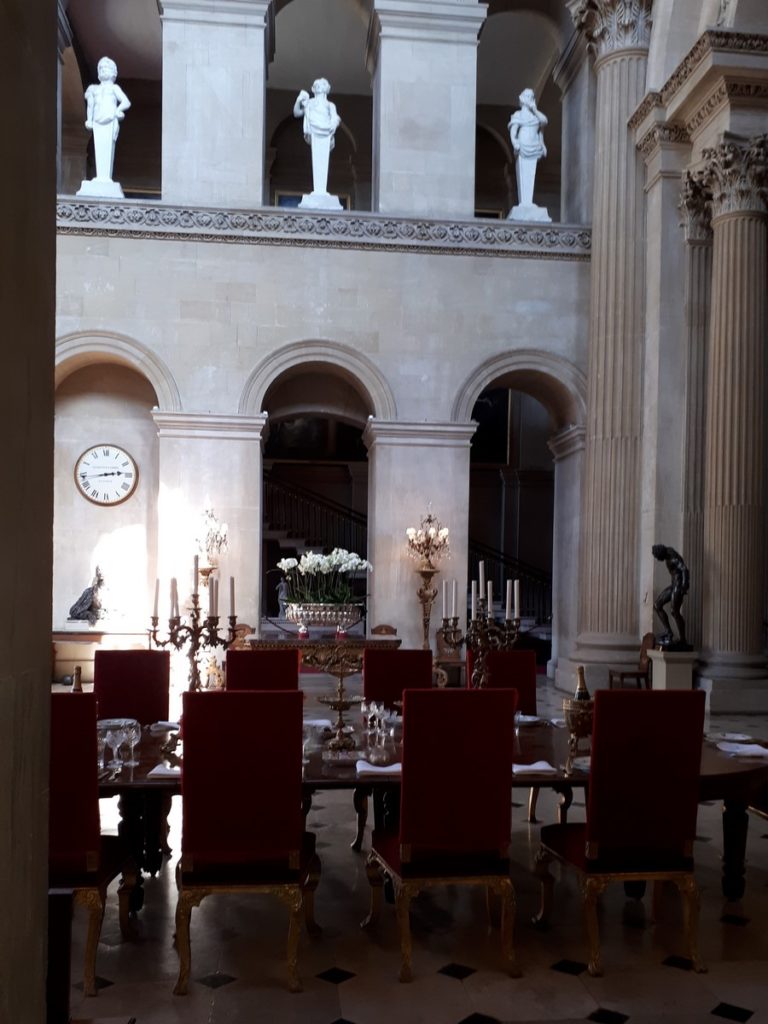 The rest of the Palace is a bit less eccentric – 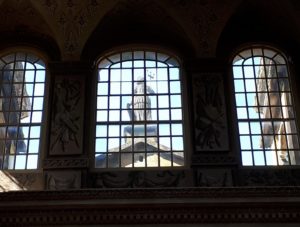 After touring the Palace, Sandra and I took a turn around a portion of the gardens –

And then carried on through the grounds to the nearby market town of Woodstock. 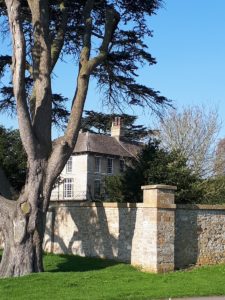 Woodstock was established in 1179, when King Henry gave the town a Royal Charter. From the 16th century, the town was known for glove making, but the town changed substantially once the 1st Duke of Marlborough took up residency at Blenheim and by 1720, the primary business of the town was fine steel work, evolving shortly thereafter into the manufacture of cut steel jewelry. 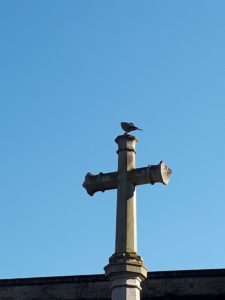 Except for the cars and modern day street signs, Woodstock retains most of its historic charm, the streets lined with period buildings. 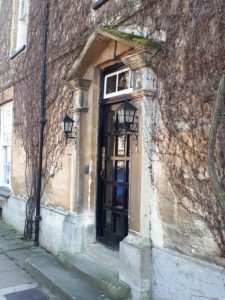 The Bear Hotel has stood in Park Street since the 13th century and continues to draw in customers today – Sandra and I were unable to pass it up, choosing instead to stop in for a refreshing afternoon pick-me-up. 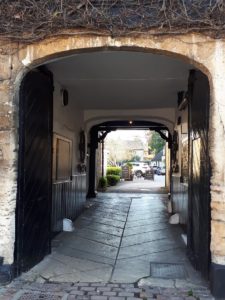 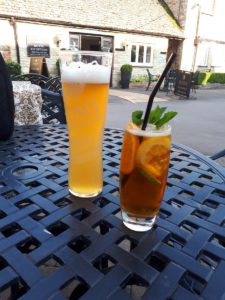 As we sipped our drinks, I mentioned to Sandra that, once we’d returned to London, I’d like to swing by the Duke of Wellington pub, near our hotel in Sloane Square and where we’d be meeting my friend, Ian Fletcher, the following night.

This we did and you can no doubt imagine my shock when I found the place locked up tight, the furniture cleared out and the sign board gone . . . until the next installment! 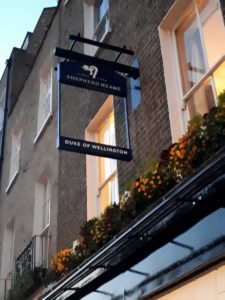