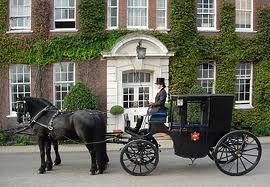 Four-horse coach weighs a ton; a single brougham, the lightest close carriage built, weighs about seven hundredweight: the carriage horse has thus not much of a weight to pull, but he has to pull it at a good pace, and it is the pace that kills. In quick work nowadays it is as much as an average carriage horse can do to travel fourteen miles a day for five days only of the week.

Eighty per cent of the magnificent animals that draw the family coaches to the Queen’s drawing-rooms are on hire from the jobmaster. If you keep them and shoe them yourself at your own stables, you can get them for a hundred guineas a year; if you want them only from April to July, you will be lucky to get them for six guineas a week, taking them by the month; or if you want them in the off season, you can, perhaps, have them cheap at sixteen guineas a month. If the jobmaster keeps them and shoes them at his stables, his charge is nearly double. This is for what is known as ‘state coach horses,’ but good carriage horses cost as much. Some jobmasters will provide you with brougham and horse, and everything but the coachman’s livery, for 200L a year, but only on the condition that you never go outside the seven-miles radius from Charing Cross. In fact, the first-class carriage horse is a somewhat unsatisfactory investment; it is safer to hire than to buy him; and hence the importance of the jobmaster in the horse-world of London.

There are some of the London jobmasters with 500 pairs out among the carriage folk, and several with over a hundred pairs. These horses are nearly all geldings, and they almost all begin their carriage work when they are four and a half years old; if they are bought before, they have to be kept till fit, which is another way of saying that there is little monetary advantage in buying them young, as the cost of their keep increases their price. Out of each thousand, three hundred are cleared out of the stables in a year to the auction mart, and about twenty-five die from accident or disease.

How many carriage horses are there in London? By the courtesy of the Board of Inland Revenue we are enabled to speak precisely with regard to the number of carriages. During the year ending March 31, 1891, the number of carriage licences issued within the Administrative County of London was 22,204. Of these, 7,955 were for carriages with four or more wheels drawn by two or more horses; 7,535 for carriages with four or more wheels but fitted to be drawn by one horse only, and 6,714 for carriages with less than four wheels. Of course, this is independent altogether of the hackney carriages which are given in the Metropolitan Police report, and of all vehicles, carts, vans and otherwise, used in trade. These carriages have probably about forty thousand horses, varying in value from the twenty-guinea pony up to the four-hundred-guinea state-coach horse; to average them is almost impossible, although the lot would certainly represent more than 2,500,000L at present prices. 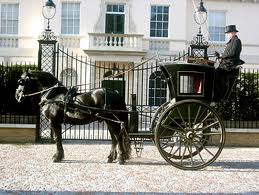 There are just double as many private carriages in London as there are cabs, and they range from the fifteen-guinea pony trap up to the three-hundred-guinea chariot, and beyond to the gorgeous official coaches including the Lord Mayor’s carriage, which pays duty like the rest. How to sort out the proportions we candidly do not know, but if we adopt for the capital they represent the excellent principle suggested by Mr. Montague Tigg, ‘and put down a one, and as many noughts as we can get in the line,’ we shall have a million’s worth, and average our vehicles at 45L each, which is about half what they are generally said to amount to.

Doubling the million, then, and adding to it the two millions and a half for the horses, and another half million for the stabling and harness, we arrive at five millions as the approximate value of the London private carriages and their horses, with their stables and coach-houses. In the last half million we are well enough within the mark to allow for any excess we may have made in the other items, for a set of pony harness will cost 51., and much of the double chariot harness seen in St. James’s Street during a drawing-room is worth from thirty to forty pounds a set; and for stable accommodation the stock estimate is 151. per horse.

The stabling in a London mews has not the best of reputations, and its accommodation compares unfavourably with that obtainable at a country.town; in fact, it is owing in a great measure to the stable difficulty that so many people job their horses during the London season. The horse of pleasure is not like the horse of trade; he is worked at all hours, but rarely with regularity; he is kept healthy with exercise instead of work; and consequently he has to be carefully looked after, and wants the best of housing, which in London he does not always get. 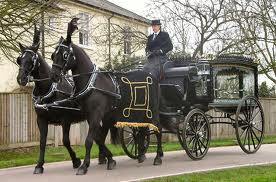 A large number of these showy carriage horses are Cleveland bays, bred in North Yorkshire and South Durham, such horses as in recent years have been sold at from 30 pounds to 60 pounds as stud-book foals, at from pounds to 70 pounds as yearlings, and at from 60 pounds to 160 pounds as two-year olds. At one time the Cleveland mare was almost the only mother of our best carriage horses, but of late a good many of them trace their maternal pedigree through the Clydesdale breed, the result being a gain in hardiness and in the firmness and fitness of the feet for the hard paving of the town streets. But there are thousands which are neither Clevelands nor Clydesdales, and are bred from a Yorkshire coach-horse and a thoroughbred mare, or from the humble hackney stallion and half-bred mare, such as may occasionally be found in our omnibus and van stables. And there are thousands that are not home-bred at all. In every county in England the foreign ‘ machiner’ will be found ousting the native, and in Hyde Park during the season he will be found in dozens, unmistakable though unlabelled, crawling along as leisurely as if his owner or hirer were like the great Earl of Chesterfield rehearsing a funeral.

1 thought on “THE CARRIAGE HORSE”