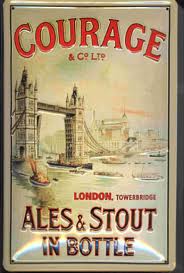 The brewer’s horse is a splendid animal, the most powerful as a rule of London’s heavy brigade. At the Cart-horse Parade, in which teams of all classes compete, the first, second, and third prizes were taken for the only two years in which they entered by Messrs. Courage, whose cast horses are generally sold for an average of 321. each, one of them having fetched fifty-one guineas, the highest price ever obtained for a horse cleared out of a stud as being past the work of the trade in which he made his first appearance in town. In fact, there is no stud in the kingdom of higher level excellence than that under Mr. Laird’s care at Horselydown, which is saying much, considering that the 3,000 horses owned by the larger London brewers are worth at the very lowest estimate 90L apiece.

A barrel of beer weighs 4 cwt.; a brewer’s van carries 25 barrels, which means 5 tons; the van itself weighs not less than 35 cwt., some of them weigh over 2 tons; the harness weighs three quarters of a hundredweight; the men weigh—what? It is a delicate question. To answer it Mr. Laird weighed a drayman for us, a fine young man in his twenty-ninth year, he weighed 20 st. 10 lbs.! And the horse he drove, a five-year-old gelding standing 17*2 and still growing, was then put on the scale, and dipped the beam at just over the ton. 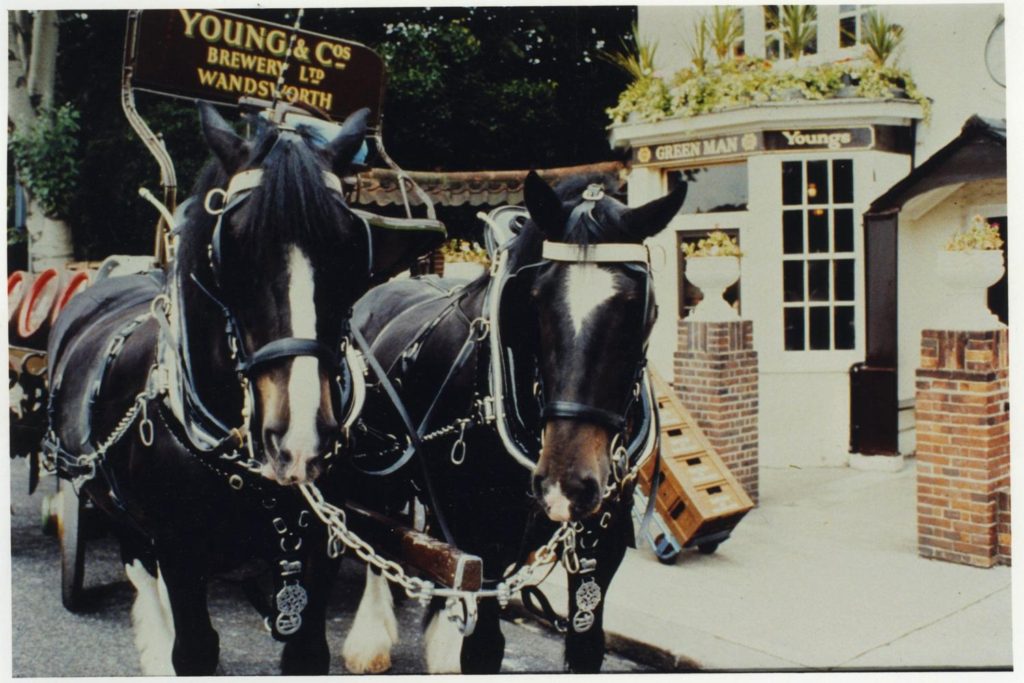 But this is hardly a fair average. Let us throw the men in with the sundries, and say these tremendous horses have to draw 8 tons; and this is for three horses worked unicorn fashion, two at the pole and one as leader. According to one horse-keeper, who had been twenty-seven years in his position, it now takes three horses to do the work that four did twenty years ago. ‘The vans have improved, the roads have improved, and the horses have improved, especially the horses’; but this is not the usual opinion, for even with the brewer’s horse the laudation of the past is the consolation of the many. 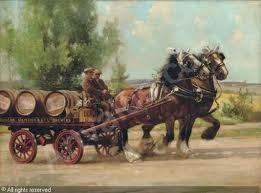 On most of these horses there is not a pound of superfluous flesh. They are working regularly every week-day, doing often their fourteen hours a day, sometimes doing sixteen hours, resting on Sundays, and having a light load on Monday, which is the brewer’s dull day; out at five o’clock in the morning, back into stable at seven at night; averaging six years of work; and then, in many cases, realising over 201. under the hammer when cleared out to make way for the newcomers.

Most of those under notice to quit look little the worse for wear, although perhaps their legs may have come over a little with the draught, which in the suburbs is severe, the load being no light one to drag over a hilly track at the brewer’s walking rate of five miles an hour easy. But it does not do for a team to have a weak horse, unless, maybe, the leader, who can shirk now and then if he chooses, for the rate of the slowest is ever the rate of progress; hence horses are worked together only so long as they work equally, and the weak one is rejected immediately he is found out, lest he should demoralise his companions. 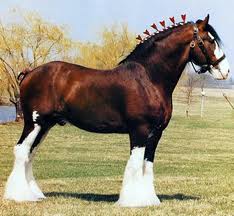 There is a prevalent notion that hairy-legged horses stand heavy work better than others, but the value is not in the hair, but in the stout bone it should cover. One of Courage’s best horses is a Clydesdale, with his fore legs so fine, because fleshless and so thinly-haired, that the question has been asked if it was intended ‘to go racing with that animal’; but Clydesdales, though now improving every year, do not run quite heavy enough for brewers’ work, and nearly all the horses are shires. Some brewers—Barclay & Perkins, for instance —have nothing but shires in their stables; and this particular stud, a singularly fine one, averages seven and a half years of brewery life.

Of course all the brewers do not work their horses on the same system. Hoare’s, by way of example, work their 160 horses only five days a week, and no horse is allowed to be out more than ten hours without being examined by the horse-keeper. Their horses are bought at six years old and cleared out on the average at twelve, which is as soon as they show the least sign of decay; and there is not a horse in their stud weighing under 16 cwt. or standing under 17 hands, which compares rather awkwardly for the antiquarians with the 14 ‘handfuls’ which Henry VIII. fixed as the minimum of stallions in 1535. A range of twelve inches, unless the horses were of very different classes, seems too wide to be true. The thoroughbred racehorse increases a hand in height every century; in 1700 ho stood 13-2, he now stands 15-2; and it certainly looks as though the heavy horse had also grown a little.

It is noteworthy that these big horses should so very seldom have bad tempers; they are almost as intelligent as dogs, and quite as amiable. They are in rude health, it is true, and that may account for their being comfortable and pleased with themselves, more especially as they are kept hard at regular work, but it is scarcely enough to answer for their peculiar placidity under all circumstances.

The one great secret of keeping them in condition is attention to their feet. There is no animal more carefully shod than a brewer’s horse. Many of them have a different make and shape of shoe on each hoof. At Courage’s, for instance, no such things as standard sizes are known; the shoe is always made specially to fit the foot, and the shoes are never thrown away, but are mended—soled and heeled, in fact—by having pieces of iron welded into them again and again as they are worn. Some of the shoes are steel-faced; some are barred, the shoe going all round the foot; some have heels, some have toes; some have one clip, some have two; in fact, there are almost as many makes of shoe as there are in a Northampton factory.

1 thought on “THE BREWER’S HORSE”