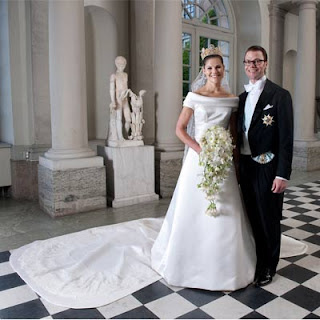 This is really just a collection of pretty wedding pictures and  gorgeous dresses.  But, since it’s on our minds, these days, why not?  Some of these brides are related to the U.K. royals, others from European families. At right is Crown Princess Victoria of Sweden with her husband, Daniel   Wrestling.  They were married in Stockholm in June, 2010.

The dress is elegantly simple and looks perfect on Princess Victoria. Only the tiara — though it looks more like a crown — is elaborately decorated. 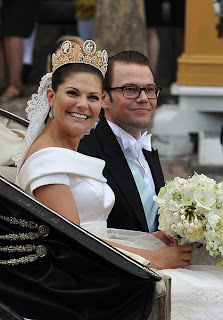 Crown Princess Victoria Ingrid Alice Désirée was in 1977.  She will become Queen of Sweden upon the death of her father, King Carl XIV Gustav. through her father, Victoria is related to the British royals and actually occupies a position in the line of U.K. royal succession.  Now known as HRH Prince Daniel, Duke of Vastergotland, Victoria’s husband is her former personal trainer and ran a company owning several gyms. 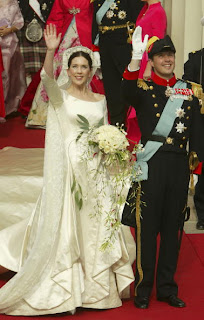 Another Scandinavian royal wedding was in Copenhagen Denmark on May 14, 2005, when HRH Crown Prince Frederik married Mary Donaldson, an Australian.  They recently had twins, in January, 2011, a boy and a girl. Their older siblings are Prince Christian, born in 2005, and Princess Isabella, born in 2007. 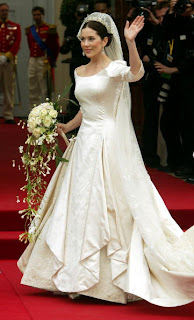 Crown Princess Mary made a beautiful bride and her dress was picture perfect.  The overskirt draping makes graceful detailing near the hem, rather an unusual but pleasing feature. 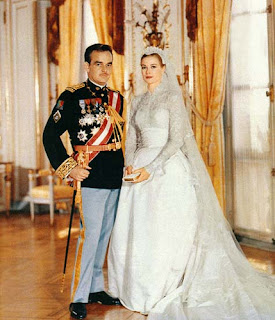 Hollywood royalty was united with royalty from the tiny but rich principality of Monaco when film star Grace Kelly married Prince Rainer in 1956.

The very nigh neckline of the gown amused many observers who were well aware of Kelly’s reputation for behaving entirely contrary to her look of a perfectly-proper ice queen.  Princess Grace, mother of three royal children, died in a car crash in 1982. The Prince died in 2005. 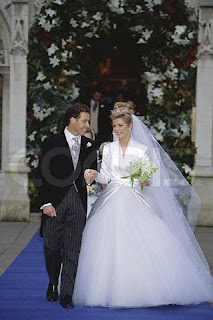 David Armstrong-Jones, Viscount Linley, married Hon. Serena Stanhope in October of 1993 at St. Margaret’s, Westminster. He runs a thriving furniture business with a showroom in Pimlico which is quite fun to visit.  Fashion observers noted how the gown, by Bruce  Bobbins, resembled the neckline design of  Princess Margaret’s gown from 1960. The Viscount is Margaret’s eldest child. The Linleys have two children, Charles, born 1999, and Margarita, born 2002. The very next year, Princess Margaret’s daughter Lady Sarah Armstrong-Jones married  actor Daniel Chatto at St Stephen Walbrook in the City of London on July 14,  1994. Her gown by Jasper Conran is elegantly traditional, though the venue for the ceremony was unusual for a member of the royal family.  The Chattos have two sons, born in 1996 and 1999.

The last of Queen Elizabeth II’s sons to wed was Prince Edward. He married Sophie Rhys-Jones in 1999 at St. George’s Chapel, Windsor Castle, below.  They are titled the Earl and Countess of Wessex. The gown was designed by Samantha Shaw. The Wessexes have two children, Lady Louise, born 2003, and James, Viscount Severn, born in 2007. 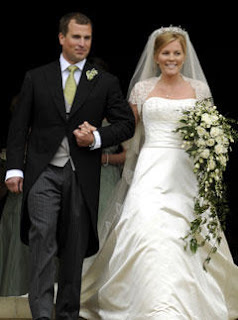 The Queen’s eldest grandchild, Peter Phillips, married Canadian Autumn Kelly at St. George’s Chapel, Windsor Castle, on May 17, 2008.  The strapless dress was certainly au courant with its lace shrug, or bolero, if you wish. It was designed by Sassi Holford, one of the leading bridal gown providers in Britain.    The tiara worn by Autumn was the “something borrowed” — from Anne, Princess Royal,  Autumn’s new mother-in-law.

The Queen’s first great grandchild was born to Autumn and Peter on December 29, 2010, named Savannah. 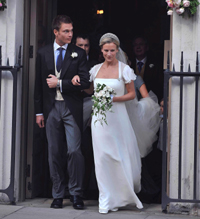 Lady Rose Windsor, daughter of the Duke of Gloucester (cousin of Queen Elizabeth II), was married to George Gilman, on July 19, 2008 at the Queen’s Chapel, St. James Palace.  The gown is lovely and the tiara one loaned from the royal collection, but finding the name of the dress designer was impossible — all the press reports focused on what Kate Middleton was wearing.

In addition to the wedding of Kate and Prince William, 2011 also saw the wedding of Zara Phillips, daughter of Anne, Princess Royal, and rugby star Mike Tindall on July 30. 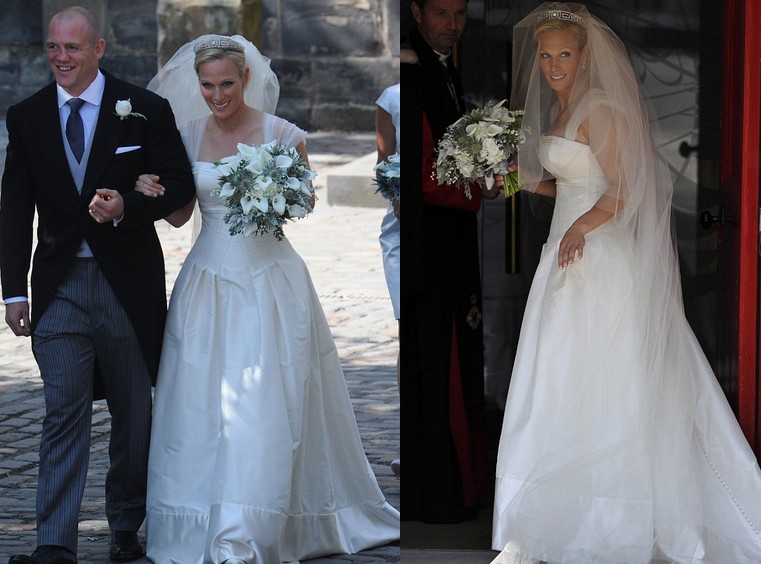