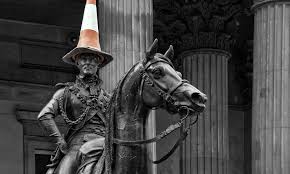 Being at a remove of two hundred years from the victory at the Battle of Waterloo, it’s difficult for us to appreciate the Duke of Wellington’s resultant contemporary popularity. To put it in perspective, Wellington could be said, without exaggeration, to have been the world’s first rock star, a media phenomenon whose level of popularity reached fever pitch. Combine the present day public interest in Princess Diana with that of Michael Jackson and you’ll get a fair idea of Wellington’s celebrity status post-Waterloo and his ability to single-handedly drive the 19th century media engine.  Printsellers, the contemporary equivalent to our modern day paparazzi, worked at fever pitch to regularly issue new Wellington engravings, with which the populace decorated their walls.  The public clamored for news of Wellington’s doings, with no detail of his life being too inconsequential to report. The media responded by giving the public what they wanted – not a single day passed in which Wellington’s name was not mentioned in print.

Enter English journalist Albany Fonblanque who, from 1820 to 1830, was successively employed on the staff of The Times and the Morning Chronicle, whilst he contributed to the Examiner, to the London Magazine and to the Westminster Review. While writing for London newspapers, Fonblanque also sought to reform his profession, often turning to satire in order to point out the flaws in current journalistic styles. So, when the Duke rose to political power in 1828, and with the public still rabid for daily details of Wellington’s life, Fonblanque used satire in order to point out the absurdities in some of the pieces being printed and the level to which the press had sunk in order to provide the public with the content they desired. Fonblanque wrote a piece entitled, The Duke of Wellington at Home –

“THE Duke of Wellington generally rises at about eight. Before he gets out of bed he commonly pulls off his nightcap, and while he is dressing he sometimes whistles a tune, and occasionally damns his valet. The Duke of Wellington uses warm water in shaving, and lays on a greater quantity of lather than ordinary men. While shaving he chiefly breathes through his nose, with a view, as is conceived, of keeping the suds out of his mouth; and sometimes he blows out one cheek, sometimes the other, to present a better surface to the razor.

“At eleven o’clock, if the weather is fine, the Duke’s horse is brought to the door. The Duke’s horse on these occasions is always saddled and bridled. The Duke’s horse is ordinarily the same white horse he rode at Waterloo, and which was eaten by the hounds at Strathfieldsaye. His hair is of a chestnut colour. Before the Duke goes out, he has his hat and gloves brought him by a servant. The Duke of Wellington always puts his hat on his head and the gloves on his hands. The Duke’s daily manner of mounting his horse is the same that it was on the morning of the glorious battle of Waterloo. His Grace first takes the rein in his left hand which he lays on the horse’s mane; he then puts his left foot in the stirrup, and with a spring brings his body up, and his right leg over the body of the animal by the way of the tail, and thus places himself in the saddle; he then drops his right foot into the stirrup, puts his horse to a walk, and seldom falls off, being an admirable equestrian. When acquaintances and friends salute the Duke in the streets, such is his affability that he either bows, touches his hat, or recognises their civility in some way or other. The Duke of Wellington very commonly says, “How are you?’—‘It’s a fine day’—‘How d’ye do?’—and makes frequent and various remarks on the weather, and the dust or the mud, as it may be. At twelve o’clock on Mondays, Wednesdays, and Fridays, the Duke’s master comes to teach him his political economy. The Duke makes wonderful progress in his studies, and his instructor is used pleasantly to observe that ‘the Duke gets on like a house on fire.’

“At the Treasury the Duke of Wellington does nothing but think. He sits on a leathern library chair, with his heels and a good part of his legs on the table. When thus in profound thought, he very frequently closes his eyes for hours together, and makes an extraordinary and rather appalling noise through his nose. Such is the Duke of Wellington’s devotion to business that he eats no luncheon. In the House of Lords the Duke’s manner of proceeding is this: he walks up to the fire-place, turns his back to it, separates the skirts of his coat, tossing them over the dexter and sinister arms, thrusts his hands in his breeches’ pockets, and so stands at ease. The characteristic of the Duke’s oratory is a brevity the next thing to silence. As brevity is the soul of wit, it may confidently be affirmed that in this quality Lord North and Sheridan were fools compared with him.”