From The Gentleman’s Magazine, December 1825

Duchess Of Rutland. Nov. 23. At Belvoir Cattle, in consequence of an inflammation of the chest, aged 45, Elizabeth Duchess of Rutland. Her Grace so lately as Friday the 18th was engaged in inspecting the progress of the numerous workmen employed in completing the splendid decorations of the grand drawing-room at Belvoir, which it was intended should have been first opened on the occasion of the Duke’s approaching birth-day: she also took her accustomed exercise, and wrote several letters. In the evening symptoms of the disease, with which she was severely attacked a year ago, began to manifest themselves; but on the following day they appeared to have abated very considerably. At two o’clock on Sunday morning, Mr. Catlett, surgeon to the family, who sleeps in the castle, was hastily summoned to her Grace’s apartment, and found her state so extremely dangerous as to excite the most alarming appreheusions. Expresses were instantly sent off to Dr. Wilson, of Grantham, Dr. Pennington, of Nottingham, Dr. Arnold, of Leicester, and Sir Henry Halford. The three first promptly obeyed the summons; Sir Henry arrived at the castle from London at 5 o’clock on Tuesday morning, but the hand of death was already on the Duchess; all the efforts of the faculty had been unremittingly exerted to arrest the progress of the disorder, but in vain. Her Grace, whose self-possession was remarkable, felt perfectly alive to the imminence of her danger, and the fortitude with which she bore her acute sufferings, and viewed her approaching fate, was in the highest degree affecting. The Duke never quitted the bed-side till she had ceased to breathe. Dispatches were immediately forwarded, announcing the afflicting event, to his Majesty, to his Royal Highness the Duke of York, and to the various branches of the Rutland and Carlisle families.

Her Grace was the fifth, but second surviving daughter of Frederick Karl of Carlisle (Byron’s guardian, the 5th Earl of Carlisle), who died Sept. 4, 1825, by Caroline, daughter of Granville-Levison, the first Marquess of Stafford; was born Nov. 13, 1780. She was married to John-Henry Manners, Duke of Rutland, on the 22d of April 1799, and had issue nine children, of whom three sons and four daughters survive. 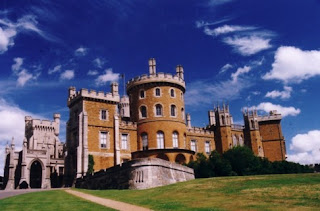 Due to her elevated taste, Belvoir Castle ( above)  will long remain a magnificent monument. From its first commencement, 25 years ago, in despite of momentary interruption from the calamitous fire in October 1816, until its recent completion, the lamented Duchess had been the presiding Genius of the place, and selected all the plans for its erection; nor were her active and useful exertions restricted to the castle alone. The grounds, the villages, the roads in its vicinity, even the general aspect of the country, were improved through her agency. Every rational suggestion which had for its object the decoration and the embellishment of this beautiful domain, was adopted with eagerness. and zealously carried into effect under her personal and immediate superintendence. 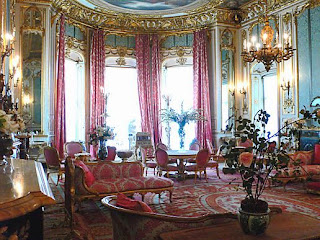 What many individuals would have required a century to execute, her perseverance in a few years achieved; nor was her Grace less successful in the cultivation of the elegant accomplishments of her sex. Her drawings exhibit correct taste. Her poetical genius, hereditary from her noble father the late Earl of Carlisle, and her musical attainments were of the first order. Indefatigable in whatever might promote the general good, and alive to the true interests of her Country, the Duchess was a practical agriculturist. The farm she held, consisting of above 700 acres, visited almost daily by herself, has always been considered a model of scientific management. On several occasions she was complimented with premiums from the Society for the Promotion of Arts and Manufactures, for her extensive plantations and acknowledged improvements in the breeding of cattle. 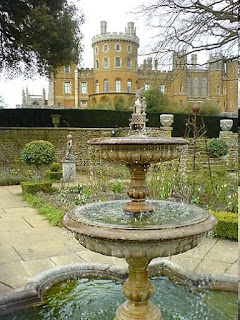 It is striking that with predilections so marked and decided for a rural life, her Grace was one of the brightest ornaments of the English Court, and whenever she graced it with her presence, an object of universal admiration. The ease and dignity of her deportment, her refined and polished address, the graceful condescension of her manners, fascinated every one who came within the sphere of her numerous attractions. Married early to the object of her choice, as a wife, a parent, and a benefactress, she was alike exemplary. To the sorrowing hearts now and for ever bereft of her soothing affection, her tender care, her munificent charily, her death is indeed an irreparable loss!

Dec. 9. The remains of the Duchess of Rutland were deposited in the family vault at Bottesford. Crowds of inhabitants of the vicinity had assembled to pay the last tribute of respect to their esteemed benefactress. Early in the morning the Duke of Rutland arrived at Bottesford, and immediately proceeded to the house of the Rev. Charles Thornton. The procession left Belvoir Castle at ten o’clock, and arrived at Bottesford about one. It was followed by a long train of carriages and other vehicles. The following was the order observed :

Mr. Pound, his Grace’s woodman, accompanied by twelve tenants of his Grace, in deep mourning.—The Duchess’s Coronet, on a crimson velvet cushion, carried by a gentleman uncovered.—A favourite pony of the late Duchess, enveloped in a black cloth, in the corners of which were embossed her Grace’s armorial bearings, led by two of her Grace’s oldest servants. —The hearse, drawn by black horses which had belonged to ber Grace, and driven by her Grace’s coachman —Five mourning coaches, drawn by six horses each —Her Grace’s carriage, drawn by four horses.—W. F. Norton, esq. in his own carriage, accompanied by the Rev. Mr. Salmon.—Two carriages and four.— Forty-six of his Grace’s tenants in deep mourning.—Two of the carriages in the procession were occupied by the immediate family—one by the Earl of Carlisle and his brother, and the other by the brothers of his Grace.

The procession, in the first instance, proceeded to the Rectory-yard, Bottesford, where it remained about one hour. The remains of the lamented lady were then taken from the hearse, and carried into the Church by eight Gentlemen. The coffin was covered with a rich pall of black velvet, decorated with her Grace’s armorial bearings. His Grace joined the procession at the Rectory. Twenty-six of the noble ancestors and relatives of his Grace lie entombed in the vault, which now also contains the remains of his late amiable Duchess.

Her Grace was not forgotten, as we see in a piece that appeared in Bell’s World of Fashion – January 1 1829

. . . entertainments of much splendour and liberality have been given in many a noble mansion; and these have not been bounded within a narrow space, but have extended to the country, as well as occupied the town. Of these, it behoves us particularly to mention the grand file given on the 5th ult. at Belvoir Castle, upon the congratulatory occasion of the birthday anniversary of his Grace of Rutland, its noble and worthy possessor. The Duke of Wellington, and a very large party of highly distinguished personages, were present.

A drawing-room, of truly magnificent dimensions, was for the first time opened; at one end of which stood a full-length statue, executed on the purest white marble (emblem of her stainless character and unsullied virtue!), of the late amiable and greatly regretted Duchess. The ceiling of this rich apartment was divided into sections, in which, cleverly painted, were the portraits of the Duke and late Duchess, the dowager Duchess, and other members of the noble house of Belvoir; also that of the late Duke of York, who was much in the habit of honouring the Castle with his presence, and its excellent possessor with his highest confidence and his purest friendship. This entertainment was the first given by his Grace since the decease of his late ever-to-be-remembered and esteemed Duchess.

1 thought on “THE DEATH OF ELIZABETH, 5th DUCHESS OF RUTLAND”