Parts of this museum are not for the squeamish and access at present is limited to those who can climb a rather steep 52 steps up a spiral staircase, but the insight offered into the worlds of medicine and surgery during the Regency and Victorian eras by this unique and little known place is not to be missed. In addition to an extensive collection of medical accoutrements it houses what is considered Europe’s oldest surviving operating theatre.

St. Thomas is one of the oldest hospitals in London. It was established in Southwark, a part of London considered a den of immorality and criminal elements at the time. Thomas Cromwell pronounced it the bawdy hospital of Southwark when he visited it in 1535. It was originally set up as a hospital for unwed mothers and by the time Cromwell visited it was known for its treatment of those who suffered with venereal diseases. The hospital’s manager, Richard Mabbott is said to have kept a concubine and to have sold the church plate. At least they picked a manager who would fit in.

The hospital was moved a number of times over the years, but the clientele changed very little. St. Thomas’s Hospital was dedicated to serving the poor, those with venereal diseases, and a fair share of lunatics. Between 1693 and 1709 the hospital was rebuilt through the efforts of the hospital board president, Robert Clayton, and his friend, Thomas Guy, who founded Guy’s Hospital next door. The medieval church around which the original hospital was built was demolished and replaced with the church which now houses the museum.

In 1751 the male operating theatre was added to the hospital. It was housed in the top floor to give it better access to daylight. The female operating theatre, the one which is the centerpiece of today’s museum, was installed in 1821. Eventually the hospital moved on to better quarters, after a period of time using the buildings of the zoological gardens in Lambeth, but the original operating theatre and the herb garret were rediscovered during renovations of the church building in 1962.

The operating theatre is as it would have appeared in the early to mid-nineteenth century, complete with the viewing areas used to teach medical students. The rest of the museum is an amazing exhibit of medical instruments, medical specimens as they would have been housed during this era, and the contents of the herb garret and pharmacy where the medicines of the day were dried and prepared. 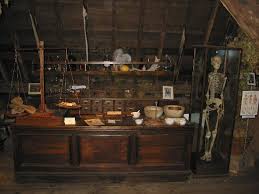 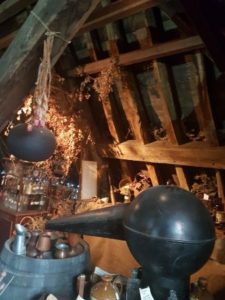 The museum features period mock surgeries and surgical lectures on Saturdays at 2:00 PM and weekly lectures on the preparation of medicines and the Regency and Victorian era pharmacy. Their educational programs, lectures, and walks are listed on the website and frankly if I had endless time I would attend each and every one. Check out the list here :

The museum has a blog which is a treasure trove of information on the history of medicine as it was practiced at St. Thomas and other hospitals of the Georgian and Victorian eras.

Anyone with an interest in the earliest surgeries of the “modern” era, the creation of medicines from herbs, and some of the odd and frankly frightening ways medicine was practiced prior to the twentieth century should avail themselves of the incredible resource that is The Old Operating Theatre Museum and Herb Garret.

Check out their website, but be prepared to spend some time pouring over this brilliant online presence of a real gem of a museum! Definitely adding this one to the UK bucket list!