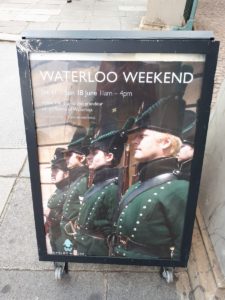 What better place to spend Waterloo Day than in London? More precisely, at Apsley House. Well before the day, I had planned to meet my old mates Dawn Wood and Andrew Clark at Apsley House, where they were slated to do a series of talks on Regency dress and Napoleonic uniforms over the two day weekend. 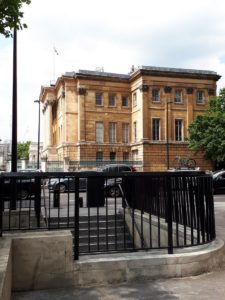 Upon walking through the front door of the House, I saw one of the house guides, Alex, who I’ve known for some time now. We chatted for a few minutes and then I headed up the stairs to the Striped Drawing Room.

Upon reaching the landing, I spied a bloke in full Napoleonic uniform – it was my pal, Michael Paterson, who is a part of the City of London Portsoken Volunteers re-enactment group.

“Kristine? What are you doing here?”

“Where else would you expect me to be on Waterloo Day?”

It would have been handy had I snapped a photo of Michael to insert here, but I didn’t. This is John Mead, also with the Portsoken, and an historical tailor who makes all of the Regiments’ uniforms. Michael was on hand to present a talk on Napoleonic soldiers, which was fabulous. He had the crowd enraptured.

Before long, Dawn found me and we caught up for a bit before it was time for her talk. 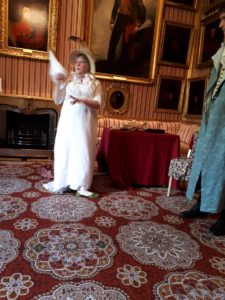 Into the Striped Drawing Room we stepped and Dawn launched into her costume presentation, enthralling the crowd with details of exactly what it took to dress a Regency lady – from the inside out. Beginning in her chemise, Dawn then described each garment she donned, giving us the history of each, detailing the materials that would have been used and the care involved in each piece.

I first met Dawn a few decades ago when she was with a re-enactment group called The Salon, now disbanded, who put on a Regency soiree for one of my tour groups at Gunnersby Park. She and I, and her husband, Andrew, have been friends ever since and they will be on hand in Bath for Number One London’s Georgian Tour, April 2018. Dawn is a modiste who recreates historic costume and dress, while Andrew is an expert on uniforms and all forms of military weapons and accouterments. Here he is in full Napoleonic kit as Captain Clark. 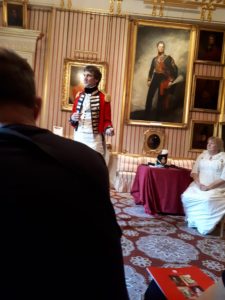 And here he is in mufti as Mr. Clark. Very versatile is Our Andrew. 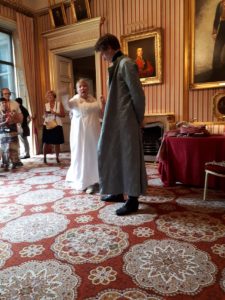 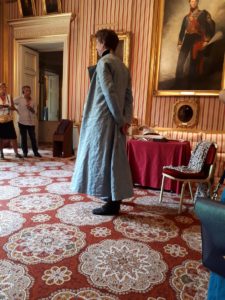 Once the presentations were over with, I nipped off to the Waterloo Chamber, where in honour of the Waterloo Anniversary they had set a dinner table with the Prussian Dinner Service commemorating the achievements of Wellington’s life, as it would have been at one of Wellington’s annual Waterloo Banquets.

You’ll find an article on the china here. Upon entering the Chamber, who did I run into again but Alex, who asked me about Wellington’s relationship with the young Queen Victoria. As I was telling him about William IV’s fateful birthday dinner, at which the King stood up and gave spleen to the Duchess of Kent in front of all the guests at table, including Wellington, a gentleman came to stand beside us and listened to my story. Then he interjected something. Then he became a part of our conversation and we chatted about Wellington for about fifteen minutes. Then the man said, “I suppose this is the point in the conversation where I should mention that I’m Graham Wellesley, 8th Earl Cowley.”

Naturally, this pronouncement caused Alex and I to look at one another like two deer caught in the headlights. What a turn up. Oh, dear.

“Yes,” replied the Earl. “Fancy your knowing that.” Alex shot me a look, but kept silent. Wise man.

“May I ask you a question?” I asked the Earl.

“Why has no one elaborated on the story of Henry and Anne and the kidnapping?”

And we were off again. The conversation lasted at least another fifteen minutes before the Earl excused himself and left Alex and I alone once more.

“I didn’t refer to Wellington as ‘Artie’ in front of the Earl, did I?”

“No. Not in front of the Earl. I don’t think,” Alex semi-reassured me. Really, I must stop doing that. Obviously, one never knows who one may run into at Apsley House. Speaking of which, upon returning once more to the Striped Drawing Room, who did I find but my mate, Loretta Chase. You can just see the top of her beautiful blonde head in the photo below.

Loretta and I had already seen each other several times in London during this trip and I’d invited her to join me at Apsley House on the day. Imagine my surprise when she told me that she’d never been to the House in all her visits to London. I had promised to take her on a Cook’s Tour.  I suggested we start on the ground floor and so we sashayed our way downstairs. Where I again ran into Alex.

“No, no, just giving my friend Loretta a tour of the House.”

“Don’t they think it’s strange that you’re giving me a tour of Apsley House?” Loretta asked as we turned a corner.

“Nope. Not in the least. I suppose they’re used to it by now.” We saw the entry hall –

and the inner hall –

and the statue of Napoleon – 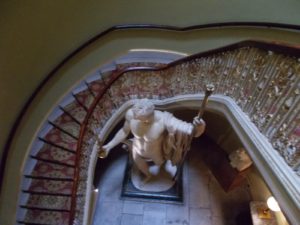 and the upstairs hallway –

and several other rooms before we found ourselves in the Waterloo Chamber.

Where I showed Loretta a secret feature of the room. I wish I could share it with you, but I’ve promised Loretta that she can use it as a plot device in an upcoming book, so I can’t talk about it until that’s published. (Sorry!)

At the end of the day, I left Apsley House replete after seeing old friends and making a few new ones and headed off to dinner in the company of Dawn and Andrew, who both agree with my sentiment – where else would anyone spend Waterloo Day? 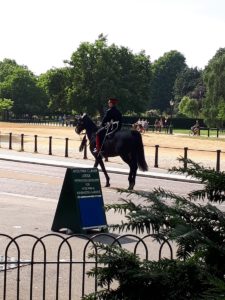