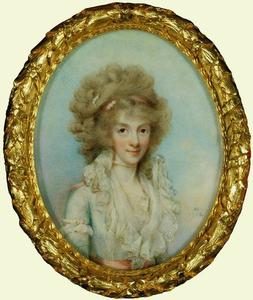 Frederica, Duchess of York, passed away on August 6, 1820, at Oatlands. For an account of that melancholy event, we turn to the Annual Register 1820 –

“On Sunday morning, at nine o’clock, died her royal highness Frederica Charlotta Ulrica, duchess of York, in the 54th year of her age. The death of her royal highness was preceded by a long and painful indisposition, which renders the event that releases her from suffering less a subject for regret. . . .”

“On Tuesday last the duchess experienced a relapse of her indisposition, of which the duke received information while in London. His royal highness, in consequence, got his levee over with all possible speed; and after he had seen all the gentlemen on his list, he hastened in his single-horse chaise from his office in the Horse Guards to York-house, where his travelling chariot and four horses were in readiness. The duchess recovering from the attack that evening, his royal highness returned to London. On Saturday the duchess was seized with another attack, which we are sorry to add proved fatal. An express was sent off from Oatlands to apprize the duke. The
duke found the duchess in a very alarming state, and in which state she continued during the night. . . .

“Thus died Frederica Charlotte Ulrica Catherine Duchess of York, in the 54th year of her age; a Princess whose meek spirit, and universal benevolence, will long be
remembered by all who came within the sphere of her observation. In person she was rather below the middle size, with blue eyes, fair hair, and a clear complexion, which, of late years, began to exhibit a sickly hue.

“Long previously to the mournful event of Her Royal Highness’s death, she had expressed an anxious wish that her remains should be deposited, not in the general mausoleum of the royal family, but in a small vault, which was prepared by her own orders under Weybridge church. His Royal Highness the Duke of York, upon being applied to upon the subject of the funeral, at once determined that the desire of his lamented consort in this respect should be complied with; and gave directions that she should be deposited in the silent mansion, which she had herself approved; and this too, also, according to her request, with as little ostentation as was consistent with the awful ceremony.

“The vault in question is situate on the south side of Weybridge church, immediately under the pew usually occupied by the humbler domestics of Oatlands. It is constructed of brick, and is capable of receiving only two coffins. The entrance is on the outside of the church, so that the body was, in the first instance, to be deposited in the aisle of the sacred edifice; and, after the first part of the burial service, to be conveyed in the usual manner to the place of interment . For the convenience of those who took part in the procession, a platform of boards was laid down from the church-porch to the mouth of the vault. This was about eight feet wide, and bounded on each side by a hand-rail, covered with black cloth. Immediately over the vault, and extending about twenty feet from the church-wall, was a covered way, which was also hung with black.”

The Duchess of York was much beloved in Weybridge and adjoining towns, as she had for many years been benefactress to many in their times of need.  Local residents, therefore, wished to erect a monument to the Duchess and for the tale of how this came about, and the connection between that monument and London’s notorious Seven Dials, we turn to The History of the Catnach Press by Charles Hindley (1887) – 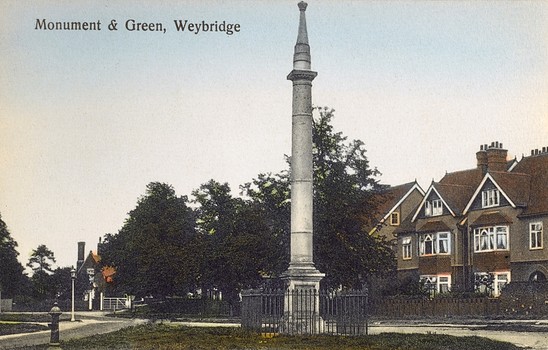 “Several years ago Mr. Albert Smith, who lived at Chertsey, discovered in his neighbourhood part of the Seven Dials—the column doing duty as a monument to a Royal Duchess—when he described the circumstance in a pleasant paper, entitled ‘Some News of a famous Old Fellow’ in his “Town and Country Magazine.” The communication is as follows :—

“Let us now quit the noisome mazes of St. Giles’s and go out and away into the pure leafy country. Seventeen or eighteen miles from town, in the county of Surrey, is the little village of Weybridge.

“One of the lions to be seen at Weybridge is Oatlands, with its large artificial grotto and bath-room, which is said—but we cannot comprehend the statement—to have cost the Duke of Newcastle, who had it built, £40,000. The late Duchess of York died at Oatlands, and lies in a small vault under Weybridge Church, wherein there is a monument, by Chantrey, to her memory. She was an excellent lady, well-loved by all the country people about her, and when she died they were anxious to put up some sort of a tribute to her memory. But the village was not able to offer a large some of money for this purpose. The good folks did their best, but the amount was still very humble, so they were obligated to dispense with the service of any eminent architect, and build up only such a monument as their means could compass. Someone told them that there was a column to be sold cheap in a stonemason’s yard, which might answer their purpose. It was accordingly purchased; a coronet was placed upon its summit; and the memorial was set up on Weybridge Green, in front of the Ship Inn, at the junction of the roads leading to Oatlands, to Shepperton Lock, and to Chertsey. This column turned out to be the original one from Seven Dials.

“The stone on which the dials were engraved or fixed, was sold with it. The poet Gay, however, was wrong when he spoke of its seven faces. It is hexagonal in its shape; this is accounted for by the fact that two of the streets opened into one angle. It was not wanted to assist in forming the monument, but was turned into a stepping stone, near the adjoining inn, to assist the infirm in mounting their horses, and there it now lies, having sunk by degrees into the earth ; but its original form can still be easily surmised. It may be about three feet in diameter.

“The column itself is about thirty feet high and two feet in diameter, displaying no great architectural taste. It is surmounted by a coronet, and the base is enclosed by a light iron railing. An appropriate inscription on one side of the base indicates its erection in the year 1822, on the others are some lines to the memory of the Duchess.

“Relics undergo strange transpositions. The obelisk from the mystic solitudes of the Nile to the centre of the Place de la Concorde, in bustling Paris—the monuments of Nineveh to the regions of Great Russell Street—the frescoes from the long, dark, and silent Pompeii to the bright and noisy Naples—all these are odd changes. But in proportion to their importance, not much behind them is that old column from the crowded dismal regions of St. Giles to the sunny tranquil Green of Weybridge.”