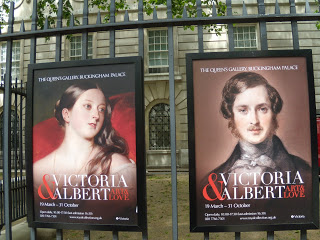 What with everyone watching the PBS miniseries Victoria every Sunday night, I thought it would be a good idea to re-post this piece on Eos, Prince Albert’s favorite canine companion. Several years ago, Victoria and I were fortunate enough to see an exhibition titled, Victoria and Albert: Art and Love at the Queen’s Gallery in London. The show was comprised of all manner of gifts that the royal couple had given to each other through the years. Many iconic paintings, specially commissioned by either Queen Victoria or Prince Albert as gifts, were on display, including this portrait of Eos by Landseer. To this day, that show remains my favorite. I sat on a bench in front of this painting for quite some time, marveling at Landseer’s skill, the beauty of Eos and the love between Victoria and Albert. 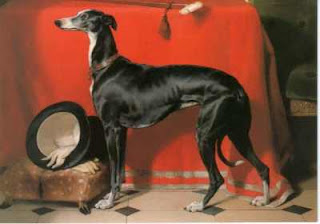 Few paintings in the Royal Collection evoke such sentiment as this portrait of Eos by Sir Edwin Landseer of Prince Albert’s favourite dog. Prince Albert brought Eos with him from Germany when he married Queen Victoria in 1840. He sent her ahead with his valet, Cart, from Canterbury and so Eos arrived before the Prince.  The Queen speaks in her journal of the pleasure which the sight of  “dear Eos” gave her the evening before the arrival of her betrothed.

The Beloved Prince: A Memoir of the Prince Consort gives another anecdote:

” In 1839, when I was serving in the Austrian Lancers, we met at Toplitz, and from thence drove together to Carlsbad, to see uncle Ernest. Eos ‘—a favourite black greyhound—’ was in the carriage. . . . We were at that moment approaching the station where we were to change horses. He asked me the name of the place, which I told him was Buchau, a village known all round as a sort of Krdhwinkel, famous for all sorts of ludicrous stories about the inhabitants. We drove into the place, the postilion blowing his horn and cracking his whip. Albert, seeing a large crowd assembled round the post-house, said to me, ‘Quick, stoop down in the carriage, and we will make Eos look out of the window, and all the people will wonder at the funny Prince.’ We did so, and the people had to satisfy their curiosity with Eos. The horses were soon changed, and we drove off, laughing heartily at our little joke.”

Described as ‘very friendly if there is plum-cake in the room … keen on hunting, sleepy after it, always proud and contemptuous of other dogs,’ Eos was a great favorite. So great was Prince Albert’s affection for the dog that, the following year, 1840, the Queen commissioned a portrait of her from Sir Edwin Landseer (above), the unofficial court painter, as a surprise Christmas present for Prince Albert. Poised and sleek against a rich red backdrop, the greyhound stands expectantly among some of the Prince’s personal effects – an opera hat, gloves and a cane.

On November 9th, 1841,the royal couple’s second child, Albert Edward was born and family members gathered for the christening. Among the guests was the Queen’s uncle, Ferdinand of Saxe Coburg, General of Cavalry in the Austrian Army. On January 27th 1842 during a shoot, Ferdinand, who obvdiously shouldn’t have been trusted with a gun, accidentally shot Eos to the great distress of Prince Albert. When the Queen’s Uncle Leopold, King of the Belgians was told, he replied that it would have been better if Ferdinand had shot another member of the royal family.

Eos eventually recovered but she was nine years old and slowing down. She died two and a half years later. “Poor dear Albert,” the Queen wrote in her journal. “He feels it terribly, and I grieve so for him.” And also about Eos, “such a beautiful and sweet creature, and used to play with the children.” The day after her death, Prince Albert wrote to his grandmother of Eos, “You will share my sorrow at this loss. She was a singularly clever creature and had been for eleven years faithfully devoted to me. How many recollections are linked with her.” Eos was buried beneath a mound above the slopes at Windsor Castle. On hearing of her demise, Lord Melbourne declared himself “in despair at hearing of poor Eos.”

A sculpture based on the painting and partly worked on by the Prince, is on Queen Victoria’s tomb in the gardens at Windsor Castle. The cane pictured in the portrait at the top of the page is now part of a collection of walking sticks administered by the Duke of Edinburgh.

Eos was undoubtedly a part of the Royal Family, as the portraits below will testify. 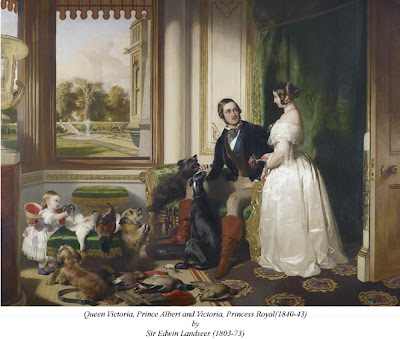 Victoria, Princess Royal, with Eos 1841
Princess Victoria with Prince Albert and Eos by Winterhalter
If you’re a fan of Victoria and Albert (and who isn’t?), consider joining Number One London Tours for the Queen Victoria Tour. We’ll be exploring the life and times of Queen Victoria as we travel to London, Brighton, the Isle of Wight and Windsor on a truly regal adventure.
Full Itinerary and Tour Details Here