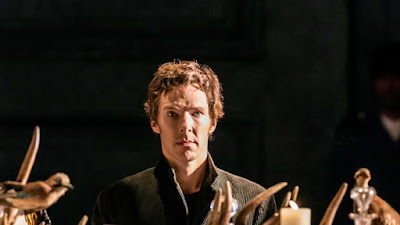 Victoria here, so glad I was able to see the showing of Benedict Cumberbatch as Hamlet, live from the National Theatre in London. Actually, it wasn’t live (a repeat) and it wasn’t from the NT (from the Barbican Theatre), but it was nevertheless terrific.  Another showing will be in many theatres in the U.S. on November 10.

FOR THE ENCORE TRAILER, CLICK HERE. Scroll down  little for the trailer.

Hamlet might be the most well-known of Shakespeare’s tragedies and only second among the his total output to Romeo and Juliet. The role is one of those markers of an actor’s prominence — and it might even be the pinnacle of most careers.

In the conversation preceding the play from the NT, Cumberbatch is asked how he feels about reciting those most familiar lines “To be or not to be? That is the question.”  You will enjoy his answer! 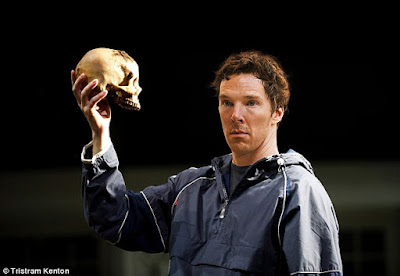 Among the outstanding performances, actually the best of all, in my view, was Ciarán Hinds as Claudius, the Uncle/Stepfather of Hamlet. 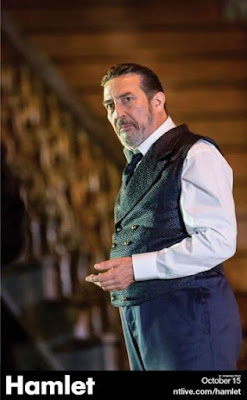 Ciarán Hinds
At first I did not care much for Siân Brooke as Ophelia. But I warmed to her interpretation as the character’s insanity develops. By her departure, I was entranced. 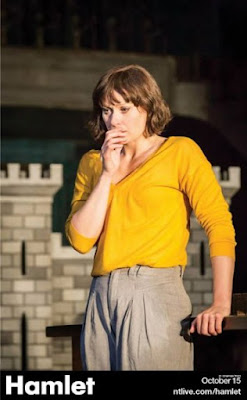 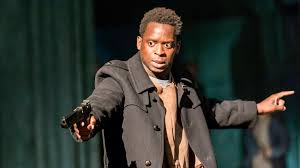 Kobna Holdbrook-Smith
Also among the outstanding performances, again in my view alone, were Kobna Holdbrook-Smith as Laertes and Rudie Dharmalingram as Horatio. I also enjoyed the dual roles as acted by Karl Johnson: the Ghost of Hamlet’s father (the late king) and the grave digger.  In addition to many other appearances, Johnson previously played Twister, a favorite from Lark Rise to Candleford. 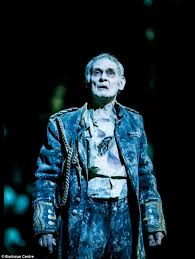 Karl Johnson
I can’t begin to count how many times I’ve seen Hamlet.  Being of a certain age, it has been more than I can count on my fingers. Maybe even my toes.

Here is a comment on the Cumberbatch version,  directed by Lyndsey Turner, from a review in the New York Times by Ben Brantley on August 25, 2015:  “Full of scenic spectacle and conceptual tweaks and quirks, this “Hamlet” is never boring. It is also never emotionally moving — except on those occasions when Mr. Cumberbatch’s Hamlet is alone with his thoughts, trying to make sense of a loud, importunate world that demands so much of him.”

Sometimes the “conceptual tweaks” got in the way of the play, in my opinion, as when the characters in the darkened background moved as in slow motion, which drew my attention — but perhaps would have been unnoticed within the theatre.

For obviously, watching the play from the stage is a very different experiences from sitting there live, but I’ll take it when it gives me the opportunity to attend “live” theatre in London from my local movie  seat, armed with popcorn and a fizzy drink.

The Telegraph reviewed the show and added a list of ten great recent Hamlets. To see their ratings, click here. 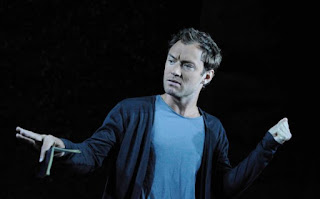 I remember well being enchanted with the film of 1996, made by Kenneth Branagh and featuring Blenheim Palace as part of the set. Other actors in that excel
lent film were Kate Winslet, Derek Jacobi (who had performed the title role in years past), Julie Christie , and many other famous  names making cameo performances. For the Branagh Hamlet trailer, click here.

Although his portrayal is definitely in an earlier tradition of the stage, it is also interesting to see Hamlet portrayed by Laurence Olivier, a true film classic from 1948. Click here for Olivier with Hamlet’s famous soliloquy. 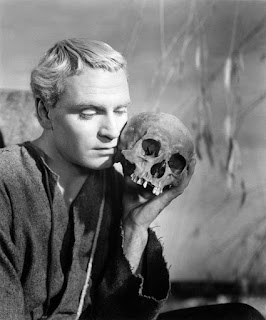 Laurence Olivier
Just in case I have whetted your appetite for more Hamlet, YouTube has many, many versions and the films are widely available at all the usual places.
Good Night, Sweet Prince!