I am so glad, for so many reasons, that my very good friends are Jo Manning and Victoria Hinshaw, not least because we share the same historic interests and the same mania for researching, and visiting, little remembered facts and places in British history. Recently, Victoria kept Jo and I in thrall with the minutae of her research itinerary whilst in England via a series of rapid fire emails – where she was going, what she was researching, the research matrix she’d prepared, who her contacts were at various archives, what the train timetable was and where she’d be eating lunch. And Jo and I swooned at the prospects. In addition to shared interests, all three of us have our own, unique historic quests and we support each other fully in these, no matter how crazy they seem. Last year, my particular quest was something the three of us termed “The Search for Paget’s Leg.”
Being an avowed Wellington afficianado, you wouldn’t think that I’d spare much energy worrying about either Henry Paget, Lord Uxbridge (created Marquis of Anglesey by Geo. IV five days after the Battle of Waterloo) or his leg, as Paget had earlier run off with Wellington’s sister-in-law, his brother Henry’s wife, Lady Charlotte. At the time, Paget was also married – to Lady Jersey’s daughter, Lady Caroline Elizabeth Villiers, by whom he’d sired eight children. (Yes, eight – the bounder! He went on to have TEN more with Charlotte). Wellington felt the impact of this desertion as well, as it threw Henry into a decline from which he was slow to recover and, in the meantime, Wellington and his wife, Kitty, had to take care of Henry’s two young children, as Henry was incapable of doing so himself.
You’ll recall that last year Victoria and I embarked on a whirlwind London/Waterloo tour, during which I was most looking forward to seeing the spot in Waterloo where Paget’s leg was buried. Yeah, yeah – totally nuts. But you have to bear in mind that Victoria, Jo and I are the Lucy Ricardos of historical research.
I realize that I’m writing this blog as if you already know the story behind Paget’s leg. If for some odd reason you’re not familiar with it, click here for the condensed version of the story. So . . . all along the route of our tour, from London to Waterloo, I’d sigh at intervals and tell Victoria, “I can’t wait to see Paget’s leg.” After the re-enactment of the Battle of Waterloo itself, Paget’s leg was to be the highlight of the tour for me. I’ve already admitted that this notion of mine was strange, but it becomes stranger still when you realize that Paget’s leg isn’t even at Wellington’s headquarters in Waterloo any longer. It was disinterred and shipped back to England when Paget (Anglesey) died in 1854 and was  buried along with the rest of him in St. Paul’s Cathedral in London. Yes, Paget and Wellington are buried in the same place. Poor Artie couldn’t shake this guy loose, even in death.
So . . . . the very last stop on the Waterloo portion of our tour was the Wellington Museum (formerly Wellington’s headquarters), where, out in the back garden, stands the spot where Paget’s leg (once) was. Even though the Heavens didn’t direct rays of sunight onto the grave whilst I was there, nor did a choir of angels sing whilst I gazed upon it, I was in alt. 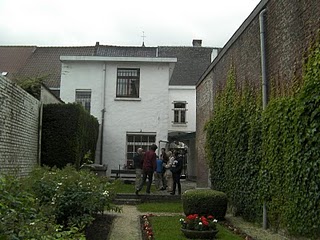 The (rather smallish) back garden The (once) final resting place of Paget’s leg 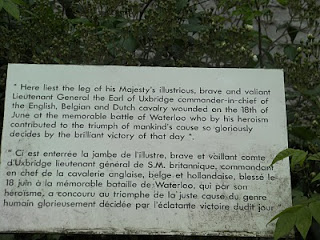 ﻿
The sign by the (former) grave
Of course, the grave itself was not the Holy Grail, rather it had become to me the symbol of all that was the Battle of Waterloo – the tragedy, the drama, the irony, the heartbreak and the heroics. I could have as easily fixated upon the site of the Duchess of Richmond’s Ball, which would have been just as fitting, as that no longer exists, either.
So . . . what’s next on my 19th century bucket list? The decoupage screen Beau Brummell was toiling away on and which was meant to be a present to his great good friend Frederica, Duchess of York.  Brummell stopped working on it when news of her death reached him in France. Trouble is, I have no idea where to begin looking for it. If you’re an aged aristocrat living in the back of beyond who happens to have the screen in your attic, email me. Heck, email me even if the screen only used to be in your attic.  Victoria, Jo and I will then embark on what we shall no doubt call “The Quest for Brummell’s Screen.”

4 thoughts on “THE SEARCH FOR PAGET'S LEG”