Upon leaving Oatlands, Hester, Hubby and myself set off for Hampton Court Palace. I had never been before and therefore felt that I should rectify that. Now I’ll come clean and tell you that I have relatively no interest in British history prior to roughly 1750. Henry VIII interests me not at all and anything earlier than that is off my historical radar. I have two great friends who write Scottish medieval romances – Sue Ellen Welfonder and the late Arnette Lamb. I’ve posed the same question to them both – why? What is remotely romantic about unwashed men with unkempt beards who wear skirts and sport dirt under their fingernails? Neither have ever given me a reason that satisfied.

Now don’t get me wrong, in the typical course of things I’m up for visiting medieval, Tudor and Restoration sites, but I’m more interested in their history and occupants during the Georgian, Regency and Victorian eras. So when I went to Hampton Court Palace, my mission was to find Grace and Favour Apartment No. 9, where the Duke of Wellington’s sister, Lady Anne, once lived. I mentioned this to Hester and Hubby when we arrived at the Palace. 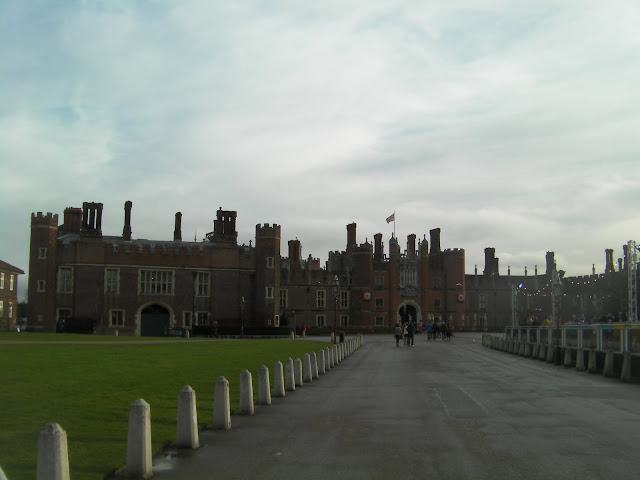 Hester said: “Well, we’ll do our best to track it down. There must be someone here who knows where it is.”

An ice skating rink had been set up near the entrance, so we stopped for a few minutes to watch the skaters. 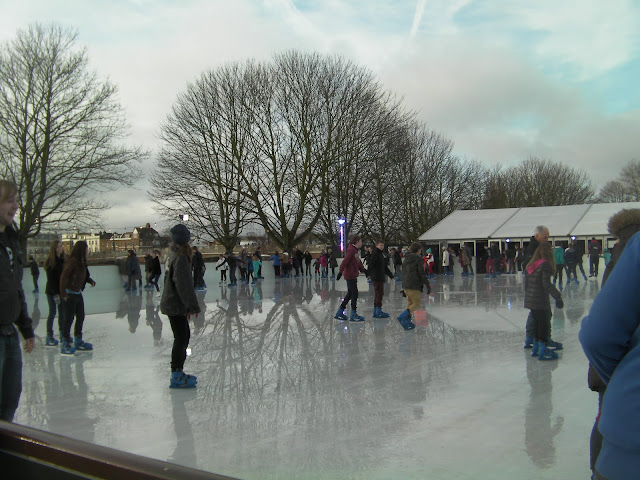 And then we passed over the moat on our way through the entrance. 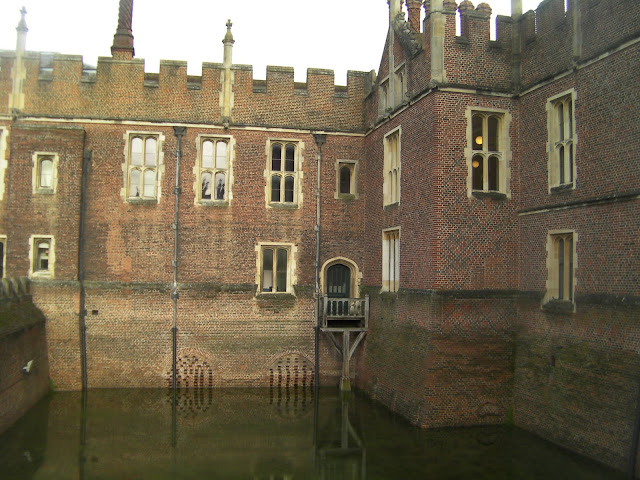 And found ourselves in a courtyard, where we couldn’t help but notice the painted wooden figures scattered about. The one below seems to be napping. 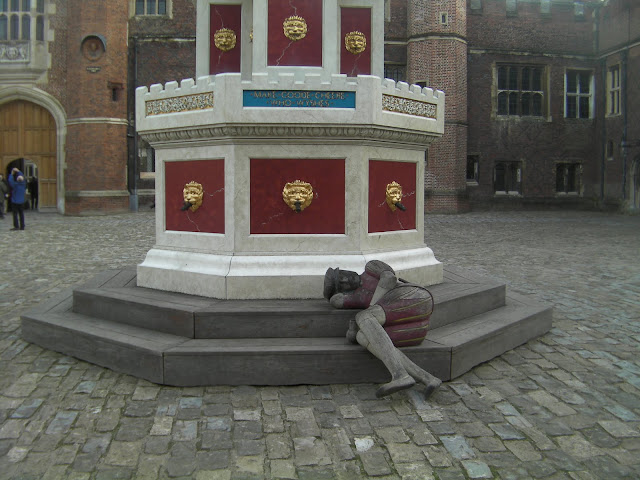 While this one looks to be hiding 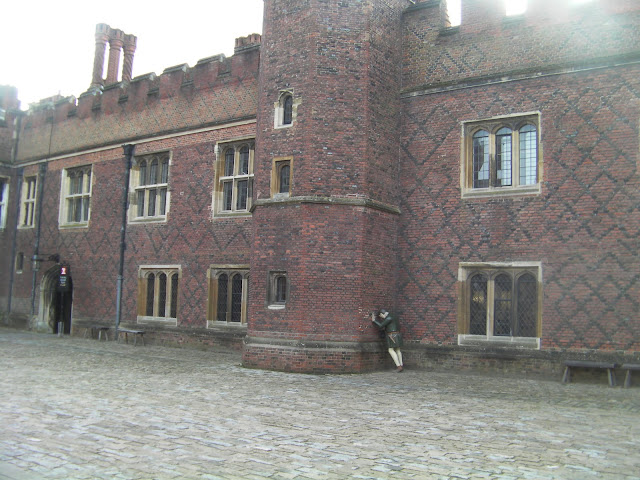 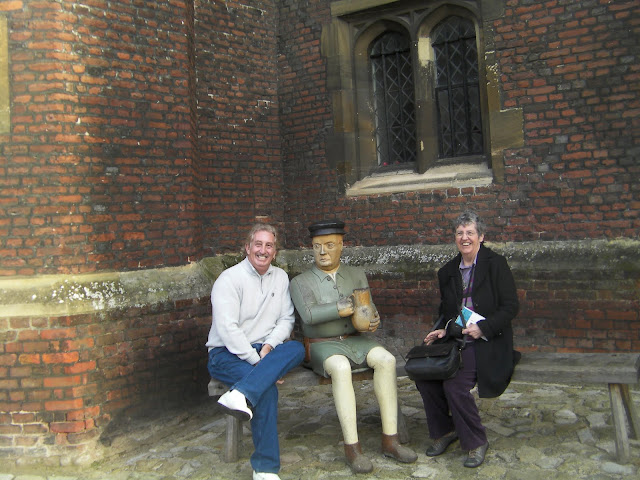 And the figure above made room for Hester and Hubby to sit beside him. Too bad there wasn’t actually anything to drink in the jug he was holding. If you know the story behind these figures, do let me know. A Google search has turned up nothing so far. 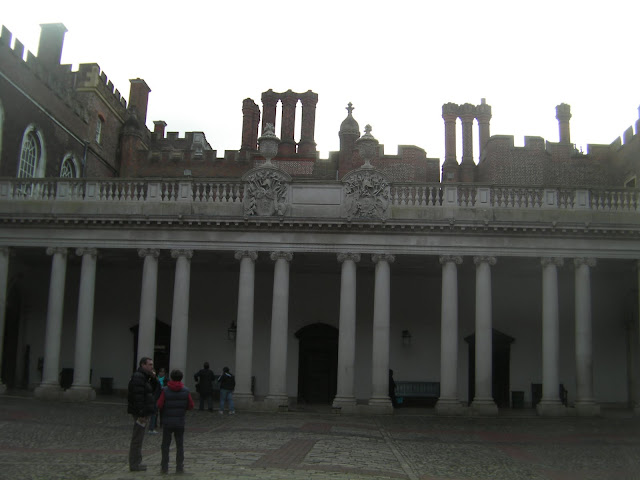 After taking note of the interesting chimney pots above, we crossed over the courtyard and into the visitor’s centre, where we paid our entry fee and Hester asked the nice lady on duty if she knew the location of Apartment 9. She said she didn’t, but that we should ask one of the Warders inside. 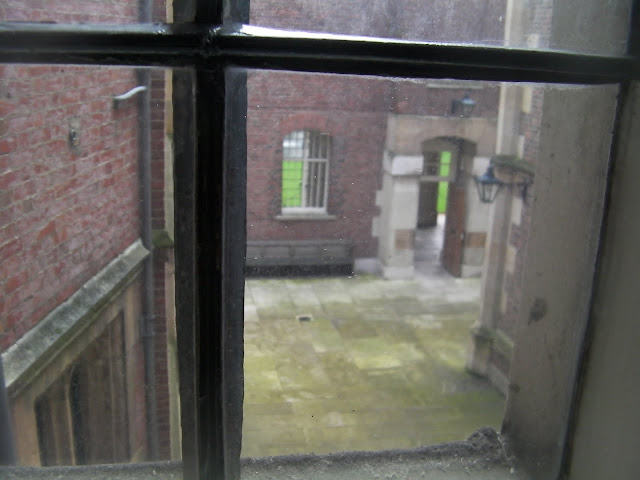 We traversed many a hallway and staircase and peeked out many a window before finding our first Warder. Upon Hester’s asking him about Apartment 9, once home to the sister of the Duke of Wellington, this Warder said, “Ah, you’ll be wanting Ian. He’ll know. That’s his time period. I believe he’s in the Georgian Rooms.”

We thanked him and moved on – before realizing that we hadn’t asked where the Georgian Rooms are. So we traversed more halls and large, empty rooms. 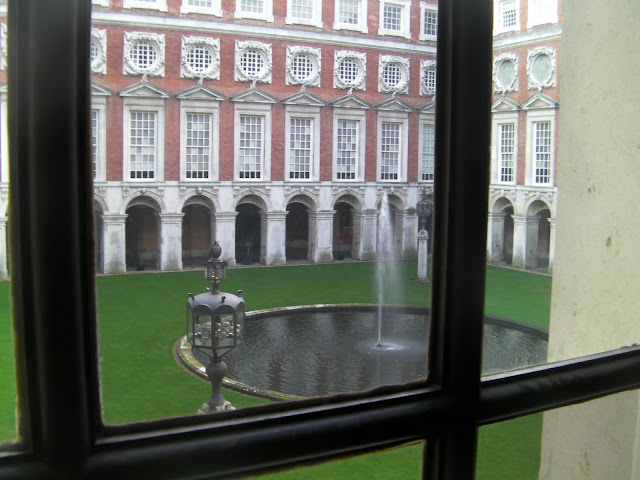 By this time, Hubby was decidedly fading.

“Oh, dear,” said Hester, after getting a good look at his pale and clammy face. “Maybe you should sit down,” she suggested.

“If there was a chair in sight, I’d take you up on that,” Hubby replied. . 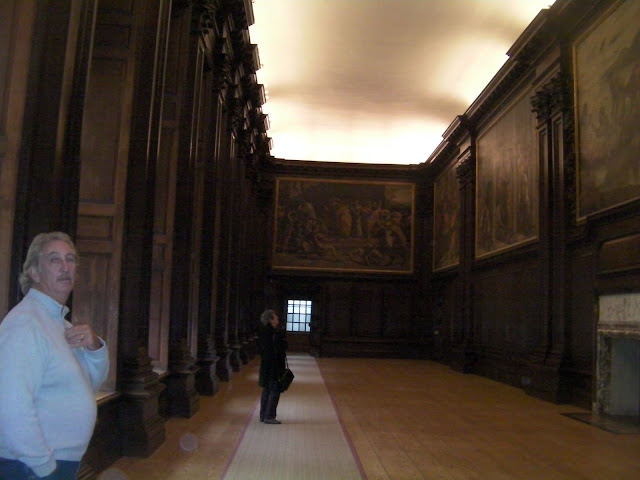 Finally, we found another Warder.

“Ian?” we all asked in hopeful unison.

“No, sorry. Ian’s in the Georgian Rooms.”

“You wouldn’t know where Apartment 9 is, by any chance?”

“Yes, the grace and favour apartment where the Duke of Wellington’s sister lived.”

We climbed up another set of stone stairs, with Hubby flagging behind us. Finally we arrived a room that actually had furniture in it. And a bed. I had to physically restrain Hubby from lying down upon it. And there was another Warder.

“Ian?” This one shook his head and pointed down a long and empty corridor. Sigh. 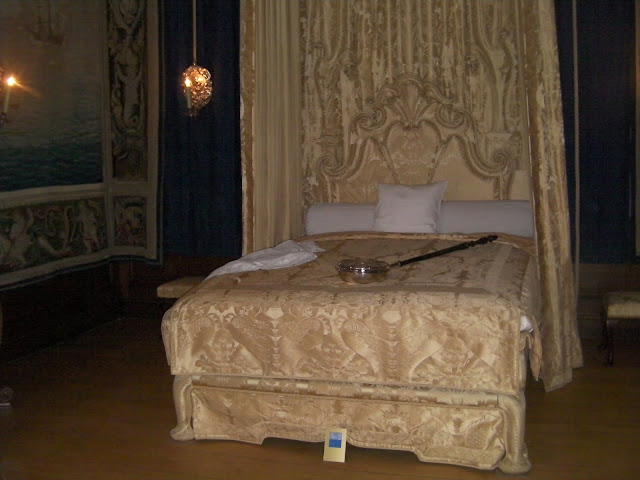 Down the hallway we all trudged until it opened into a panelled and painting lined room. In it stood another Warder.

Hester and I could have kissed him. Hubby collapsed onto a wide window ledge. 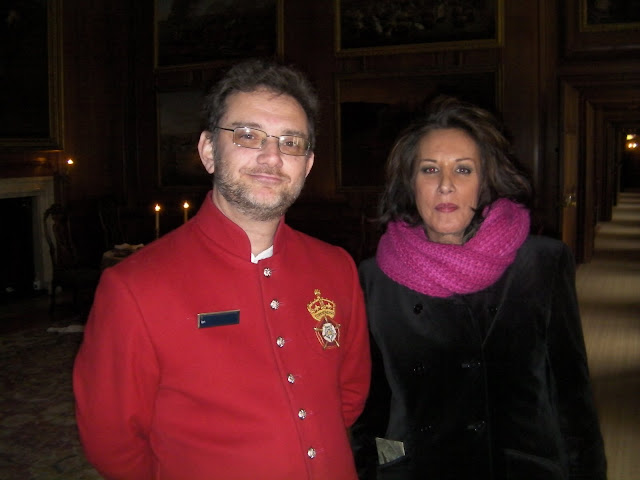 We told Ian all about our search for him and how we’d traipsed high and low searching for him, as we’d been told that he’d know all about the Duke of Wellington, Lady Anne and Apartment 9.

“I could look it up in the archives, of course, but that wouldn’t do you much good today.”

We exchanged email addresses and Ian, Hester and I began discussing the Regency and early Victorian history of Hampton Court. Turns out that Ian was, indeed, a font of knowledge. I can’t tell you off hand all we discussed, but the conversation didn’t flag for a moment and it went on for ages. After a while, I thought to check on Hubby.

Oh, dear. There he was, poor man, looking for all the world like something out the Night of the Living Dead and sitting patiently by whilst Hester and I jawed with Ian. As we turned to go, Ian said, “I’ll email you about Apartment 9. But in the meantime perhaps you’d like to see where Wellington’s mother lived?”

So off we went, following a map that Ian was kind enough to draw for us. 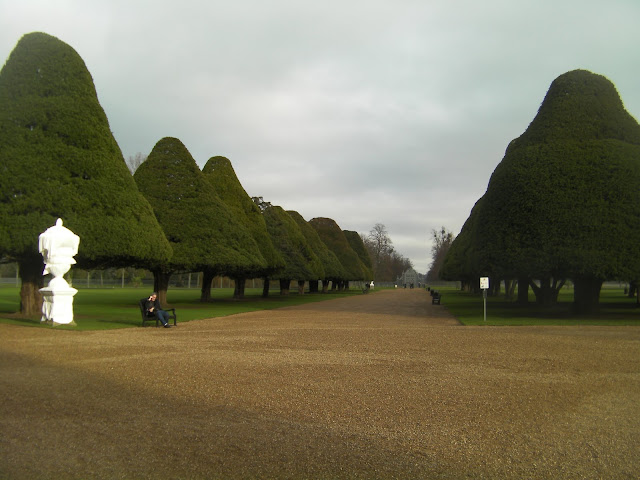 We walked the gravel paths and marveled at the sculpted trees until, miracle or miracles, we found the entrance to the apartment where Lady Mornington once lived, pictured below, exactly as described to us by Ian. Apparently, Lady Mornington kept a garden of some note behind these green gates. I contented myself with the fact that we’d at least found the spot and took pity upon Hubby by suggesting that we head back to Windsor, and our hotel room.

As we turned to go, I said to Hester, “Thank you for bringing us to see Hampton Court. And don’t forget we’ve got the tour of the kitchens at Windsor Castle tomorrow.”

“Oooh, I’m looking forward to that,” she replied.

“Kitchens? A tour of kitchens? I don’t have to go, do I?” asked Hubby.

“And you’ve been such a good sport today,” Hester encouraged him. Looking at me sideways, she continued, “Perhaps he’d be better off in bed.”

“Well, of course you could stay in bed, but it’s the royal kitchens. They aren’t open all the time, you know, it’s a special tour.” 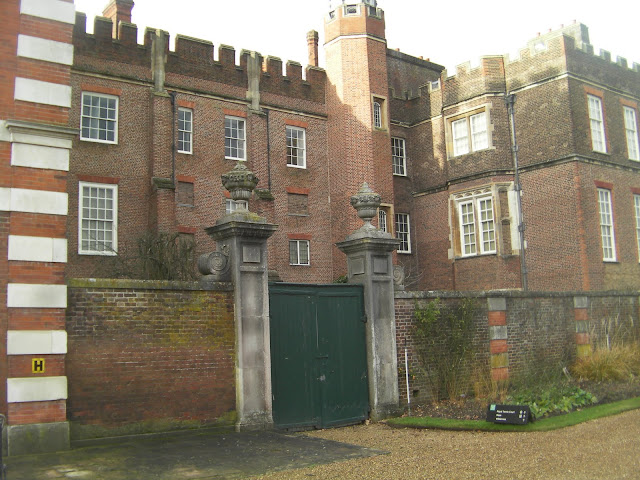