After Hampton Court Palace, Hubby and I went back to the Castle Hotel and rested for a while before venturing out again for dinner. This time, we ventured a whole two blocks away, just down the High Street to the Duchess of Cambridge pub. 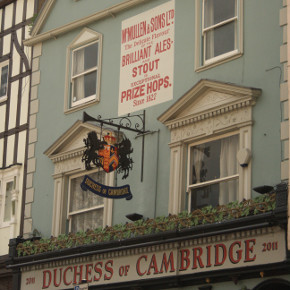 Soon after we’d sat down, I realized that the three blokes at the next table were ardently discussing Downton Abbey. I tried to eavesdrop, naturally, but it was hard to decipher every word and, besides, I was distracted by the Duchess of Cambridge. The Duchess of Cambridge who? I wracked my brain for an historical Duchess of Cambridge who’d rank pub name status. In Windsor, no less. Which Duchess of Cambridge had ties to Windsor? Princess Augusta, who’d married Prinny’s brother, the Duke of Cambridge? Hadn’t they spent a good portion of their time in Hanover, rather than England? And his son, George, had married an actress, whose existence was ignored by the entire Royal Family and she’d been denied the title HRH, anyway. And upon George’s death, the title became extinct until it was bestowed upon the present Prince William. Hhhmmmm . . . .

“You were off in a cloud. What are you thinking about?” Hubby asked.

I opened my mouth to answer, realized what I’d been thinking about, and said instead, “Nothing.”

Our waiter approached to take our orders. “Can you tell me which Duchess of Cambridge the pub is named for?” I asked.

This brought me up short. “But the pub’s been here for years. I’ve been here before, long before Kate was the Duchess of Cambridge.”

“Oh, yeah, it’s been here for centuries, but it wasn’t named the Duchess of Cambridge then. We just changed the name last year.”

After dinner, we made an early night of it and the next day I met Hester at the Guildhall for a private, guided tour of the Museum – where Hester got to meet the Queen. 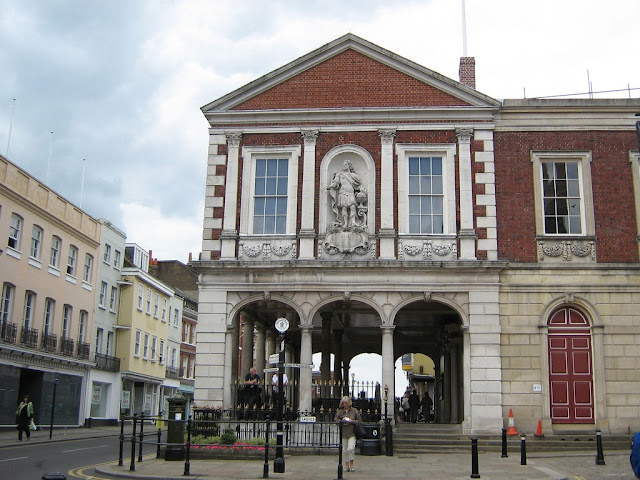 The present Guildhall replaced an older cornmarket and was built in the late 17th century and is often associated with Christopher Wren, although there’s no evidence of this. The Museum itself is housed in a 19th century extension and serves to display items of local history. 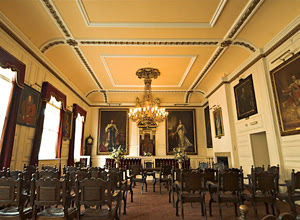 Upstairs, royal portraits adorn the walls, including one of himself given by Prinny which was so large the council had to take a window out to fit it in. Also upstairs is the room where Prince Charles married Camilla – dubbed by myself as “the scene of the crime.” The room contains several stained glass windows and more portraits, including a grim one of Queen Victoria and a rather nice one of the present Queen when young. 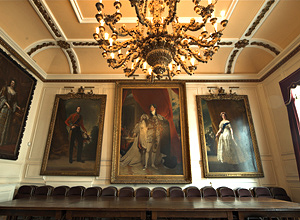 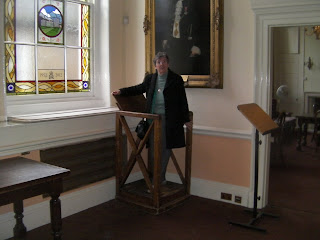 Here’s Hester standing in the very room where, by the way, Elton John was also married. To the left in the picture above can be seen one of the new Diamond Jubilee windows, showing Balmoral Castle.
Here’s the story of the dock, or pulpit, Hester is standing upon in Hester’s own words: “In 1882 a Scotsman, Roderick McLean, attempted to shoot Queen Victoria at the railway station. He missed, but was arrested and was to be brought before the magistrates in the Guildhall next day, for formal proceedings to send him for full trial in Reading (county town). But there wasn’t a dock. So overnight a carpenter knocked up the piece of furniture you see. McLean was duly arraigned and despatched for a full trial at Reading. There he was found ‘Not guilty but insane.’ The Queen was furious, there was a big fuss and the result was that today in such cases the verdict is recorded ‘Guilty but insane.’ McLean spent the rest of his life in a mental asylum. Why did he want to shoot the Queen? He had sent her some poetry he’d written, and she hadn’t said thank you! (I always draw the moral when children are present.) Nowadays this dock is used by witnesses giving evidence at Coroners’ Courts.”