Next day, we met Hester in the car park. When I introduced her to Hubby, all she said was, “Oh dear.”

I opened the rear door of Hester’s car and Hubby dropped onto the back seat. We pulled out of the car park and were soon on our way to Oatlands Park, home of Frederica, Duchess of York, or Freddy, as she’s affectionately known by my circle of friends. 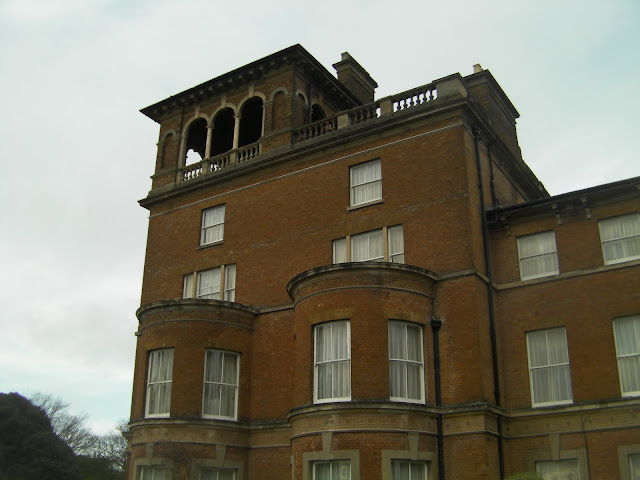 I’ve been wanting to see Oatlands Park, Freddy’s home, for ages and so I was thrilled when Hester agreed to accompany there. Today, Oatlands is a hotel that stands on the footprint of a large mansion which burned down in the late 1700s, but had dated back to the 15th Century. A Parliamentary Survey of the period mentions a house which sat in the grounds of a great royal palace, on the Oatlands Estate. Henry VIII erected the palace for his new Queen, Anne of Cleves. Although a worthy rival to his other riverside house at Hampton Court, the imposing red brick building with its gateways, octagonal towers and open courts, Oatlands was only visited occasionally by the King. And the intended resident, Anne, probably never lived there during the short time she was his wife, but it is thought Henry secretly married his next Queen, Anne’s young Lady-in-Waiting, Catherine Howard, in the Palace chapel. 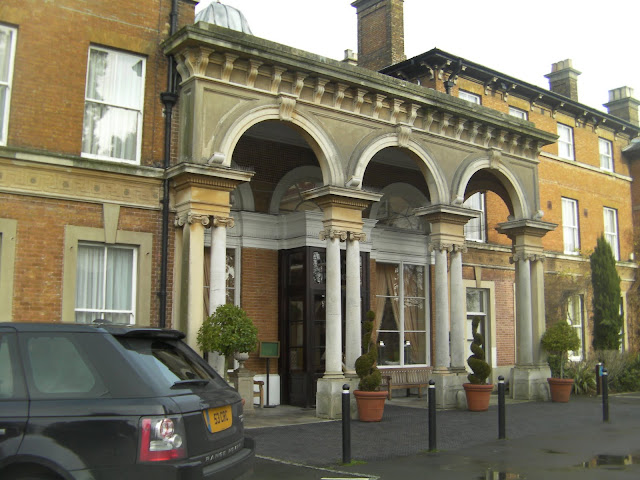 Over the next 150 years, the house and grounds were remodelled by a string of wealthy tenants. You can still see the coat of arms of one, the Duke of Newcastle, on the main gates at the entrance to the Hotel. 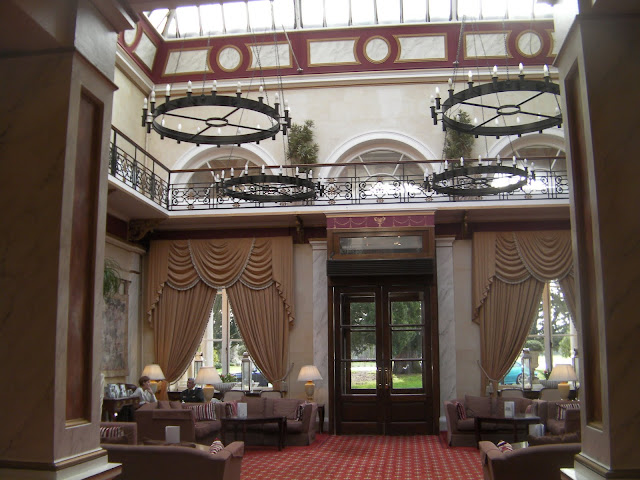 Upon entering the building, we found ourselves in a bright and airy lounge and settled ourselves upon the sofas, where we ordered coffees.

“And soon we’ll be at the famous cemetery,” I said.

“A pet cemetery. Freddy loved pets of every description and created a cemetery where she buried them all. She was eccentric, but popular with the Regency set.”

“Yes, and Prince Leopold stayed here after Charlotte’s death. And of course Brummell was a frequent visitor.”

“Ah, Brummell and the decoupage screen that was never finished,” sighed Hester.

“The what screen?” asked Hubby.

“Decoupage,” Hester and I replied in unison. Hubby declined to pursue the matter further.

The diarist Charles Greville has left us a picture of his visits to Oatlands in his Memoirs. Here is an extract:

“The week end parties were often large, and one of the principal amusements of the guests was to sit up playing whist till four o’clock in the morning. On Sundays,” he continues, ” we amused ourselves with eating fruit in the garden, and shooting at a mark with pistols, and playing with the monkeys. I bathed in the cold bath in the grotto, which is as clear as crystal and as cold as ice. Oatlands is the worst managed establishment in England: there are a great many servants, and nobody waits on you; a vast number of horses, and none to ride or drive.”

“The Duchess seldom goes to bed, or, if she does, only for an hour or two; she sleeps dressed upon a couch, sometimes in one room, sometimes in another. She frequently walks out very late at nights, or rather early in the morning, and she always sleeps with open windows. She dresses and breakfasts at three o’clock, afterwards walks out with all her dogs, and seldom appears before dinner-time. At night, when she cannot sleep, she has women to read to her. The Duchess of York is clever and well informed; she likes society, and dislikes all form and ceremony; but in the midst of the most familiar intercourse she always preserves a certain dignity of manner. Those who are in the habit of going to Oatlands are perfectly at their ease with her, and talk with as much freedom as they would to any other woman, but always with great respect. Her mind is not perhaps the most delicate; she shows no dislike to coarseness of sentiment or language, and I have often seen her very much amused with jokes, stories, and allusions which would shock a very nice person. But her own conversation is never polluted with anything the least indelicate or unbecoming. She is very sensible to little attentions, and is annoyed if anybody appears to keep aloof from her or to shun conversing with her. Her dogs are her greatest interest and amusement, and she has at least forty of various kinds. She is delighted when anybody gives her a dog, or a monkey, or a parrot, of all of which she has vast numbers; it is impossible to offend or annoy her more than by ill using any of her dogs, and if she were to see anybody beat or kick any one of them she would never forgive it.”

The room in which the three of us sat sipping our coffee would be unrecognizable to Freddy. After the house burnt down in 1794, it was rebuilt in the Gothic style by her husband, the Duke of York, who went on to acquire the Estate Freehold. Freddy died in 1820 and when the Duke died in 1827, the property was sold to a young Regency dandy and gambler called Edward Hughes Ball Hughes, who was popularly known as ‘The Golden Ball.’ He spent his honeymoon at Oatlands, before pulling down large parts of the existing building and making many alterations to what was left.

“Yes. I can’t wait to read the little head stones. Freddy had their names put on the stones and dates and often noted what sort of animal they were.”

Originally, the cemetery was located near the old Grotto, where Greville bathed and where George IV held a dinner in celebration of Wellington’s victory at Waterloo. The stones were moved closer to the house at some point and so were relatively easy to find as they are located right beside a gravel path. 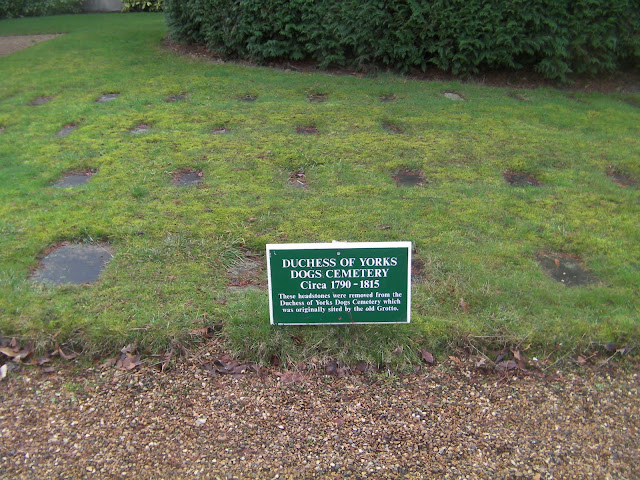 I was a bit taken aback at first glance, as I had thought that the grave markers would look more like traditional head stones. Hester and I drew closer until we were standing over the stones.

“Oh dear,” Hester said. Age and weather had worked ill upon the stones, which were now all completely smooth – whatever had once been written upon them had been forever erased.

“I wanted to read them,” I lamented.

“I know. Me, too,” said Hester, whose face showed sympath
y for my disappointment. “But look, we can still walk where Freddy and Brummell walked. That’s something, what?”

I smiled at her. “It’s something, indeed,” I said. “And  something wonderful at that.” 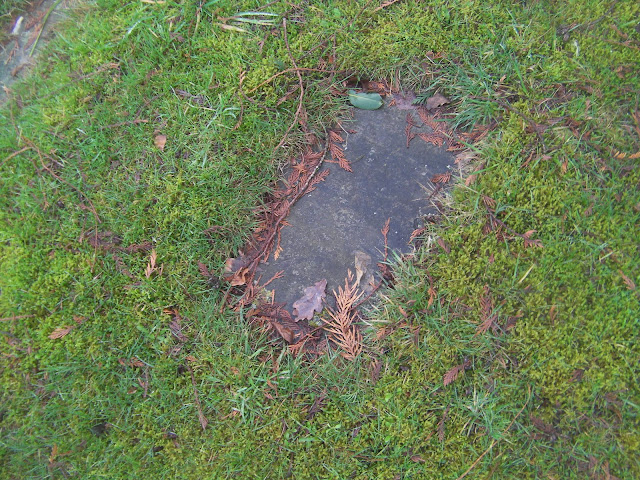 So off the three of us strolled, down the gravel paths and over to the ornamental lake. 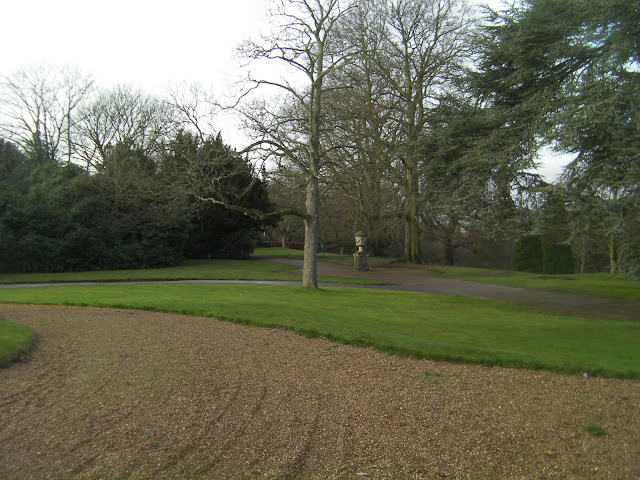 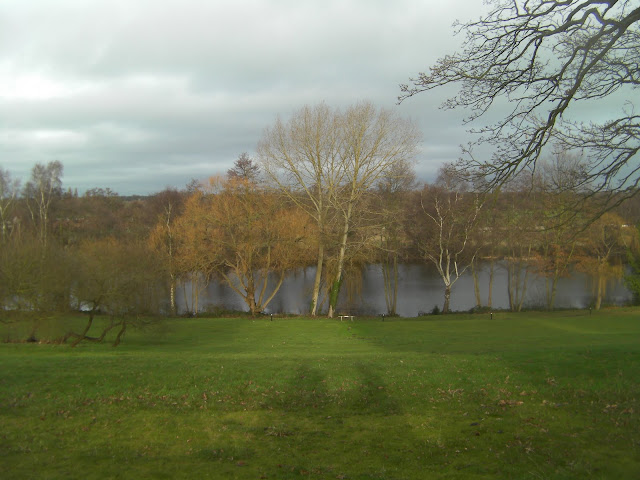 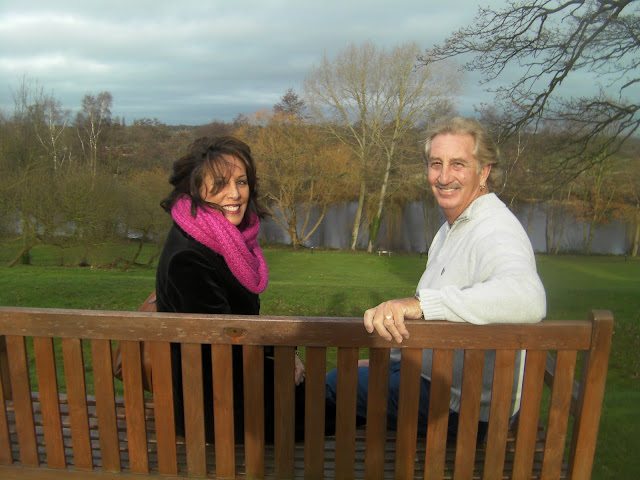 Surprise! Finally, a picture of me and Hubby! 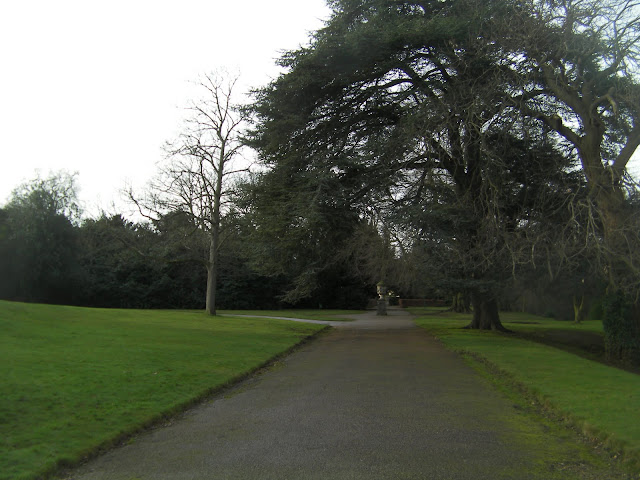 On our way back to the Hotel, Hester pointed out the cedar trees on the property. “Edward Lear used these trees as models for his painting The Cedars of Lebanon.”

In her biography of Lear called The Life of a Wanderer, Vivien Noakes wrote “He needed some cedar trees that were within easy reach of London, and he found them at the Oatlands Park Hotel at Walton-on-Thames. Whilst he was working on his nine foot long picture of the ‘Cedars of the Lebanon’, he penned letters to his friends including Emily Tennyson, Sir George Grove and Chichester Fortescue, to whom he wrote in 1860 saying “The Hotel then is a large and sumptuously commodious place… I have a large light bedroom and wanting for naught.” 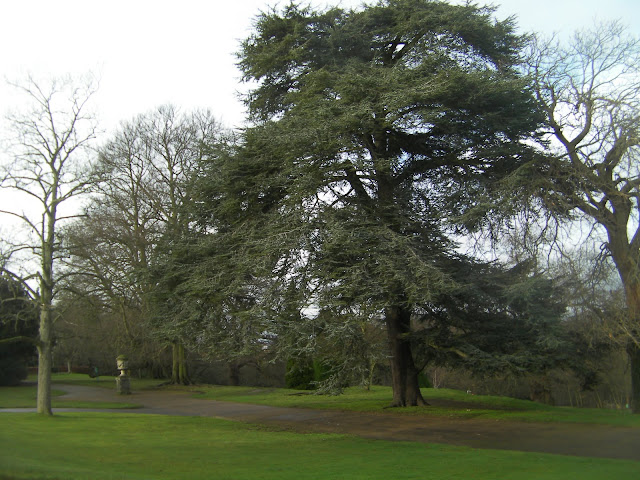 Edward Lear’s The Cedars of Lebanon Taking a long, last look at Oatlands, we made for the car park and set off on the second part of today’s journey – Hampton Court Palace. 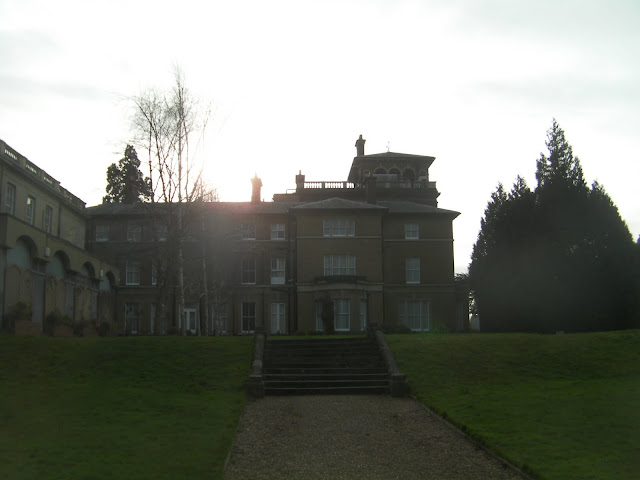