Skip to content
I woke up on our last day in Bath to a truly gruesome sight – Hubby. He was pale, clammy and looking for all the world as though he were on his last legs.
“How do you feel?” I asked in the hopes that I might have misread the signs.
“Doctor.”
“What?”
“I need a doctor. Or maybe an undertaker. I need something more than that crappy Bell’s cough stuff you gave me. No kidding, I want a doctor.”
This was serious. As a rule, Hubby runs from medical practitioners.
“Okay,” I said, my mind working. “Let’s go downstairs and see about getting you a doctor then. Can you get dressed?”
Together, we got us both dressed, and packed, and went downstairs to the reception room, where we found Michael on duty. Michael, it should be said, worked for a time as house steward to the premier land owner in the neighborhood. I don’t think I’m at liberty to tell you all I know about it, confidentiality and all, but think a stately home with the word “long” in it’s name and put that together with another word for “tub” and you might figure it out. Clue: the peer Michael worked for has a harem.
Michael took one look at us and said, “Oh, dear.”
“We’re supposed to take the train to Windsor today, to meet my friend Hester, but Hubby wants a doctor. Can you get us a doctor?”
Michael is the epitome of the word “dapper.” Dressed in a suit and tie, his hair and mustache immaculate, he exudes an air of calm and classy competence. Have I mentioned his pocket square? “I could, of course, call a doctor for you. However, if you’re going to be staying in Windsor, perhaps it would be more expedient for you to call your friend and have her arrange for Hubby to see her practitioner, who would be on the spot, so the speak.”
He slid the telephone towards me as Hubby collapsed on the couch by the fireplace. I called Hester, who said she’d call her doctor and see what she could do. She’d ring me back.
“Medicine,” Hubby croaked.
I explained to Michael that the shops had been closed yesterday and so I hadn’t been able to find any 21st century cold medicine for Hubby.
“The chemist down the street is open today,” Michael told me. And so off I went, down Great Pulteney Street to the chemist hard by the bridge. 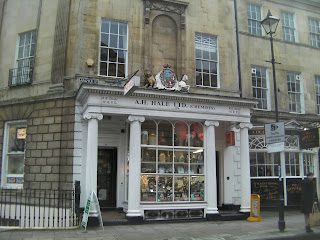 A. H. Hale, dispensing chemists, have been in business since the 1800’s and the shop looks like something out of a Jane Austen novel. 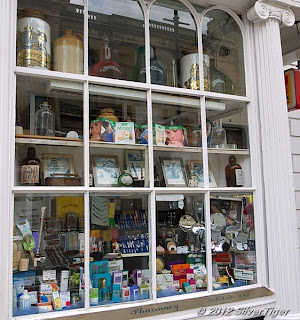 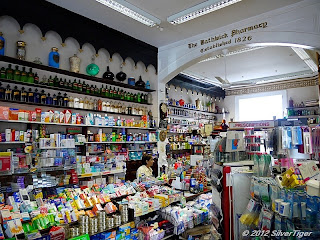 Their window is filled with glass bottles containing variously coloured liquids and powders and, best of all, modern day cold medicine. I conversed with the clerk, who listened to Hubby’s symptoms and stocked me up with an assortment of remedies. Back at the hotel, I found Hubby on the couch, drinking a bottle of Schwepps ginger ale, provided by Michael. I handed over the cough syrup and decongestant pills and within minutes he proclaimed himself much improved. Hester, it turned out, had gotten Hubby an appointment with her doctor for this afternoon, but Hubby now proclaimed himself fit to travel and no longer in need of dire medical intervention. He swore that it was the Schwepps, rather than the medicines, that had cured him. Ingrate. I called Hester, cancelled the doctor and before much longer we were in a cab headed to the station. 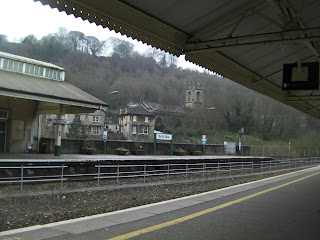 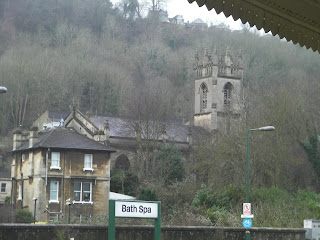 You can tell that I was feeling a bit better  myself, as I actually took these photos myself from the platform. We had a few minutes to wait for the next train, so I got us a couple of coffees and brought them out to Hubby.

“No smoking,” he said, as he took the coffee from me.

“The sign,” he said, pointing in its direction with his chin. “No smoking. We’re outside on the platform and we can’t smoke. You can’t smoke in England.”

“How long is the train ride to Windsor?”

“At Reading. And Slough.”

I could feel his pain. It wasn’t that long ago that I was myself close to death on a train. Only we had been traveling in the opposite direction.

“It is. He bought Apsley House himself. The country bought Stratfield Saye as a sort of thank you gi
ft for his having defeated Napoleon at Waterloo.”

“Yeah. Napoleon was seen as the Hitler of his day. A tyrant. He proclaimed himself as Emperor of France and then turned his eye on the rest of the world. He threatened democracies everywhere. And Wellington and his army and the allies defeated him at Waterloo. Napoleon’s army was notorious for looting and stealing whatever they needed, wherever the went. Napoleon’s troops were the ones who shot the nose off the Sphinx.”

“Yes. Destruction wherever they went. On the other hand, Wellington went out of his way to make sure that people were compensated to some degree for whatever his troops requisitioned. Not that the British didn’t indulge in some looting and pillaging of their own, but still, Artie had a completely different mindset about it. Remember the story about the looted Spanish art I told you about at Apsley House?”

“There was this guy called Congreve and he worked at the Royal Arsenal, trying to perfect rockets Wellington had first seen at Seringapatam.”

“In India. Congreve worked to perfect them, but it took several attempts. He demonstrated them to Wellington, hoping he’d use them during his campaigns. It turns out that the rockets were unreliable and their trajectory uncertain. And then they’d set things on fire instead of blowing them up. And the things set afire were not necessarily the things one was aiming at. Wellington said that when he entered a town it was most often in order to liberate it, rather than destroy it. Wellington refused to use them because of the wholesale damage they caused and the destruction they left behind. In his own words, he had a bad opinion of them.”

“So Congreve didn’t get the commission?”

“Not from Wellington, but Congreve had gotten in tight with Prinny, who was pushing for the use of the rockets.”

Sigh. “Prinny, the Prince Regent. King George the fourth. They kept pestering Wellington to use them. When Wellington was in Portugal in 1810, the matter was again raised in a letter from Vice Admiral Berkeley. Wellington said that they wouldn’t answer for his purposes on land, but he allowed that every thing deserved a fair chance. So it was that eventually the Royal Navy used them and fired them from the decks of their ships.”

“The bombs bursting in air?”

“Exactly. Those were Congreve’s rockets. They put on a great show, but weren’t very effective.”

Our train arrived and I helped Hubby get ourselves and our luggage onboard. I must say that Hubby was a brick, changes and all, up until the last leg of the journey, when a guy got on the train with a pit bull.

Hubby elbowed me in the side. “He’s got a dog on the train. A pit bull.”

Now, as you know, I pride myself on reporting this trip exactly as it happened. There was a pit bull on the train. Which now allows me to segue neatly into this photo of our granddog, Coco, the pit bull. Who believes with all his heart that he’s a Yorkshire terrier and who is constantly trying to climb onto my lap. But I digress . . . . . 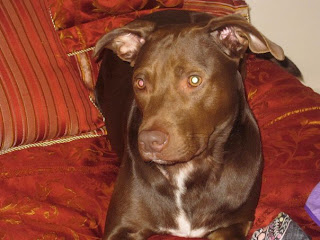 “You’re allowed to bring dogs on the train in England,” I told Hubby.

“You can’t smoke outside on the platform, but you can bring a dog into a crowded train?”

“Look!” I said as I pointed out the window.