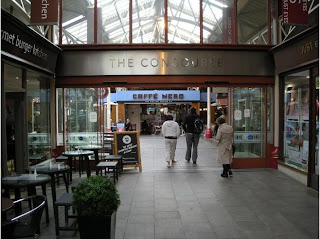 Exiting the train at Royal Windsor Station, one of the first things Hubby saw was a Caffe Nero. 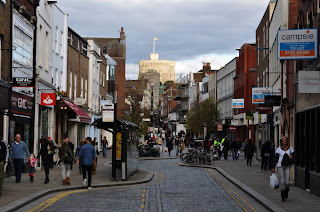 We entered the pedestrian only Peascod Street. “No cabs?”

“We don’t need one. We just need to get to the top of the street, make a right and the Castle Hotel is  a block away on the right.”

When we got to the top of the Street, I pointed at the statue. “Queen Victoria. It was erected for her Golden Jubilee in 1887.” 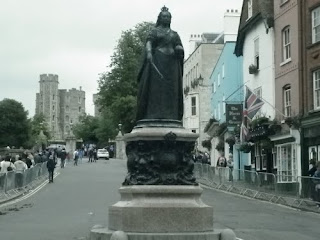 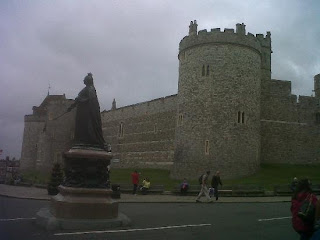 “What’s that? Is that a castle? It looks like that castle in London.”

“It’s Windsor Castle,” I told Hubby. “The castle in London is actually the Tower of London. It’s not a castle at all.”

“They look the same to me.” 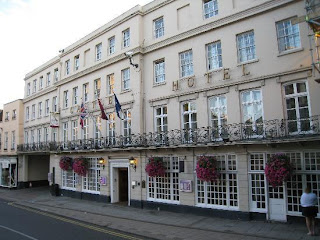 A few more steps brought us to the Castle Hotel, which is just lovely. We were given a very large room overlooking the High Street. I’m sorry I didn’t think to take a photo of the room before Hubby and I disgorged our belongings over every flat surface, but you get the idea. 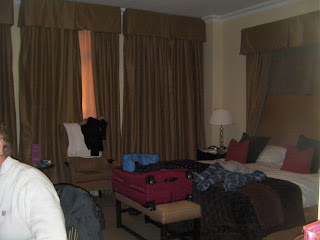 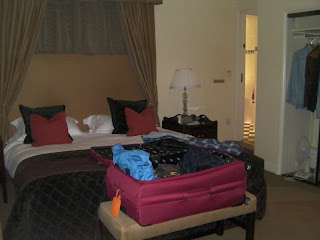 Both the Crooked House and Guildhall were right outside our window. 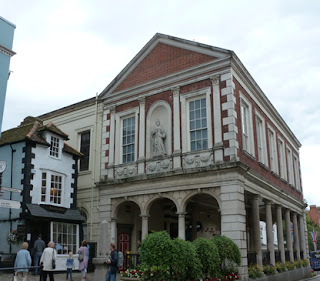 “Isn’t your friend at the Guildhall?” Hubby asked.

“Yes, Hester told me to come over and meet her there when we got to Windsor.”

“You sure?” I gave Hubby a quick once over, trying to assess his condition. He looked much better than he had this morning. Not one hundred percent, mind you, but no longer at death’s door.

“Okay. But I’ll be literally right across the street.”

Regular readers of this blog will know the name Hester Davenport. Not only has Hester contributed guest posts to this blog, she is also the author of The Prince’s Mistress: A Life of Mary Robinson, among other works, and has graciously acted as our Windsor guide whenever Vicky, Jo Manning or myself are there. In fact, a visit with Hester is typically the high point of our trips across the Pond. In addition, Hester was a driving force in getting the Windsor and Royal Borough Museum, housed in the Guildhall, up and running. In fact, Hester acted as hostess to the Queen, who paid a visit to the Museum. You can see photos and read all about Hester’s meeting with the Queen last year here. On a past visit, Hester arranged for the issues of the Windsor newspaper dealing with the Battle of Waterloo to be pulled from the archives so that Vicky and I could see them up close and personal. Now that’s what you call a pal . . . . .

When I got to the Museum, Hester was busy speaking to a few people, but she saw me, did a double take and then gave me the “be with you in a minute” high sign. I sat on a nearby bench and was shortly joined by Hester, who took a good look at me and said, “Oh, dear. I knew you were sick by your emails but I’d no idea you were this sick.”

“Worse. Don’t forget, I’m in the recovery phase now. You should have seen me a few days ago.”

“Really? The fact that I wrote you that I had cholera and was near death didn’t clue you in?”

“Well, I thought you were exaggerating somewhat,” she said, “but now I see you weren’t. Oh, dear. Are you sure you’re going to want to go to Oatlands and Hampton Court tomorrow?”

“Was Wellington at Waterloo? Yes, I’m sure. I’m going to Oatlands if I have to crawl there. I’ve longed to see Oatlands for ages now, haven’t I? I’m determined to see Freddy’s house and the pet cemetery.”

A co-worker of Hester’s came by then and Hester introduced us. “This is my friend Kristine I was telling you about.”

You’ll understand that I’ve developed an aversion to the British `Oh, dear’ during this trip. Oh dear, indeed. Why don’t the English just say what they really mean, which in this case is `Holy crap, should you be out of your sick bed?’ I couldn’t wait to see what Hester would say when she caught sight of Hubby tomorrow. Oh dear would hardly cover it.

Hester and her friend then questioned me about my illness and I gave them every sorry detail, from my not being able to get out of the cab when we arrived at Duke’s Hotel in Bath, to our missing New Year’s Eve entirely, to my not having eaten anything to speak of for a week, to my plight in Milsom Street on the way to the Fashion Museum.

When I was done – and they had both wiped the tears from their eyes and gotten their laughter under control – Hester said, “Oh, I am sorry to laugh, but that’s the funniest story. Isn’t funny?” she asked her f
riend.

“And today the pair of you had to take the train here to Windsor, what with you both feeling poorly. Now you go right back to your hotel and get some rest. I’m so glad Hubby felt he was improving and didn’t need the doctor after all, but an early night and rest will do you both a world of good. We’ve got a big day planned for tomorrow, after all.”

What good advice. I could have kissed Hester for suggesting an early night, but restrained myself as I didn’t want to pass on the cholera to her. After all, I needed her healthy and able to drive us to Oatlands and Hampton Court tomorrow. Not to mention that her husband, Tony, would be none too pleased with me if I landed Hester in the hospital.

We stood and gave each other a somewhat sanitized version of an embrace and I headed across the street to the Castle Hotel whilst wondering in what condition I would find Hubby upon my return.