When I got back to our room at the Castle Hotel, I was shocked to find that Hubby had unpacked our bags and had actually hung some of our clothes in the closet.

“Feeling better?” I asked. Hubby pointed to a low table that sat between two chairs by the window. On it were our trusty bottle of rum, a bottle of Coke and an ice bucket. I made myself a drink and took a long, lovely pull.

“Good. She couldn’t believe how bad I looked. I can’t wait till she gets a load of you.”

We sipped our drinks in silence for a while and then I brought up the subject of food.

“Yeah, we haven’t eaten anything all day. Come to think of it, neither of us has eaten much of anything for a long time. I don’t want anything fancy shmancy, Hon. I’m not up for that.”

“Fancy shmancy? You’re joking, right? I was thinking more like going straight across the road to the pub.”

“There’s a pub across the street?” Hubby looked out the window.

“Two. You can’t see them because they’re directly behind the Guildhall.”

So we finished our drinks, bundled up and headed out.

I pointed to the Guildhall as we passed. “That’s where Chuck and Camilla were married.” 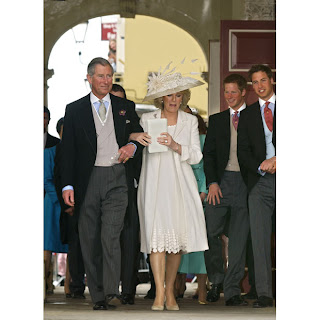 “There? Why didn’t they get married at the Castle around the corner? Boy, that must have been a dark day for you, Hon. Did you cry?”

“I contained myself. But it really should have been me who married Chuck.”

“No kidding. Think of the jewels you’re missing out on.”

“Jewels? I could care less about the jewels. What I want is the key to the Royal Archives. And to every other archive in the land that’s usually off limits. One of the first things I’d have done would’ve been to call Stratfield Saye and say `It’s me. Chuck’s wife. Let me in and lead me to the personal papers.’ Here we go, the Carpenter’s Arms.” 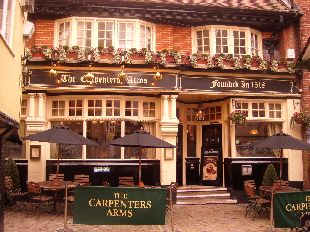 Because it was relatively early, we had the whole place to ourselves. I ordered the bangers and mash and I can’t for the life of me remember what Hubby had – and neither can he. Suffice it to say that we ordered another round of drinks and then settled down to wait for the food.

“We’re meeting Hester in the car park at the hotel tomorrow morning and she’s going to drive us to Oatlands. All you have to do is get into the car. No trains or cabs or anything else resembling work.”

“It was Freddy’s house.”

“Freddy? Who’s Freddy? Is he related to the Duke of Wellington? Is that the guy with the fake leg?”

“Freddy was a woman. Frederica, Duchess of York.” 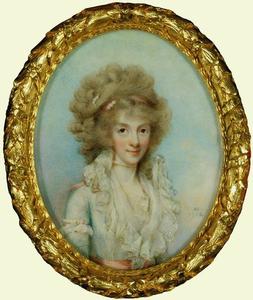 “Remember the Duke of York’s column in London?”

“The guy with the mistress?”

“Yes. Freddy was his wife.”

Sigh. “She was a Prussian princess and was rather eccentric and homely, but she was incredibly kind. Some of the greatest people of the age adored Freddy. When Tom Sheridan’s wife was gravely ill, Freddy invited her to Oatland’s to rest and recuperate. And then there was Prince Leopold.”

“Leopold. Princess Charlotte’s widower. He went to pieces when Charlotte died and Freddy was very patient with him and had him at Oatlands with her in order take his mind off things.” Our food arrived and we began to eat.

“And of course there was Beau Brummell.”

“Did you know there was a singing group called the Beau Brummells?”

“Can’t say that I do.” It was obvious that there was no use my going on about the life and times of Freddy, but I felt honour bound to mention that after we’d seen Oatlands we’d be going on the Hampton Court.

“And then after Oatlands we’re going to Hampton Court.”