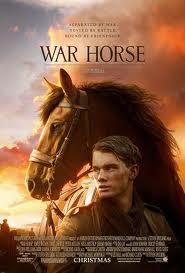 I went to see War Horse in the movies recently and got a few surprises. Firstly, I was under the impression that no one recognizable was in the cast. Imagine my surprise when I saw Benedict Cumberbatch on screen as Major Jamie Stewart who, by the way, is the antithesis of the Duke of Wellington as far as military strategy is concerned. 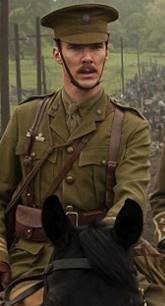 Tom Hiddleston, who first came to my notice in the 2001 version of Nicholas Nickleby, played Captain Nicholls in War Horse. He is the officer who first takes possession of Joey, or the War Horse, when he’s intially sold to the Army. He vows to keep the horse safe and to return him at the end of the war. 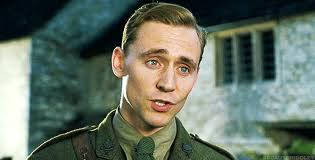 Worth an honourable mention is Eddie Marsan as Sgt. Fry. 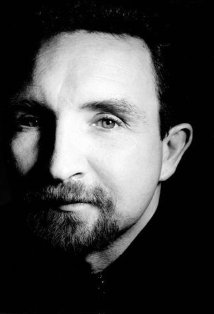 Another surprising thing about War Horse – I found myself crying at odd moments when no one else did. My first tear was shed at the opening when they showed wide shots of the hedgerows and fields of the English countryside. Next, I choked up when I saw the village in the scene where Joey is led away with the Army. 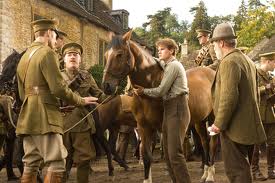 It was so iconically English. Turns out that the scene was shot in Water Street, Castle Combe, Wiltshire, below.

Then there was the scene where Cumberbatch and Hiddleston race for the gold ring during a practice charge. The entire regiment draws their swords and gallops forward, the ground thundering beneath them as thousands of hooves tear up the turf. It was so reminiscent of Waterloo that I couldn’t help tearing up. Not that I was actually at Waterloo, mind you. Well, I was at Waterloo, but not during the battle. Well, okay, I was at Waterloo during a battle, but not during the Battle of Waterloo in 1815. 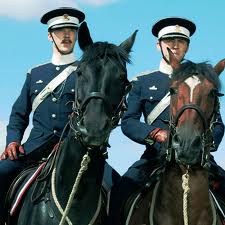 And then Benedict Cumberbatch, as Major Stewart, leads the regiment in their first battle charge in France, telling his men that their initial charge must at all costs be decisive, as it was at Waterloo, et al. And then, they begin their charge in a field of wheat, a la Waterloo. 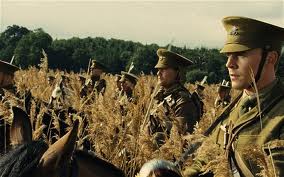 Oh, the humanity! As I choked out a sob, my husband said, “What are you crying for? Nothing’s happened yet.” Little did he know that it had happened. In 1815. In Belgium. In my mind. But the Wellington Connection was other than simply in my mind – it turns out that portions of War Horse were actually filmed at the Duke of Welllington’s country home, Stratfield Saye, a fact pointed out to me by Jo Manning, who apparently sat through all the credits and noted that the producers thanked Lord and Lady Douro for their cooperation in filming. Wikipedia tells us that “Filming of War Horse began with the cavalry scenes being filmed at Stratfield Saye House in north Hampshire, the estate of the Duke of Wellington, where incidentally Wellington’s war horse “Copenhagen” is buried. Here a cavalry charge involving 130 extras was filmed.”

So, there you have the Wellington Connection. For anything and everything else about War Horse, check Wikipedia here.