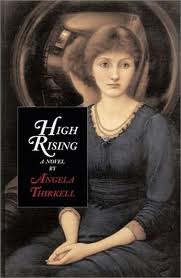 I’ve just re-read Angela Thirkell’s High Rising and realized that I’d made a huge mistake – I read it without having any more of the Barsetshire novels on hand to read next. I then spent a good hour online, ordering six more titles in the series. Honestly, these novels, and the characters therein, are pure joy. Another thing I only recently realized – penned in the 1930’s, these stories are now eighty years old, but they still read as funny and the characters are just as amusing as any 21st century counterparts. Like E.F. Benson and P.G. Wodehouse, Thirkell takes us back to an England where conversation is witty and entertaining, where plots are relatively simple (yet infinitely engaging) and where villians, if there are any, are really rather harmless, except to themselves. Everyone gets their comeuppance, everything comes right in the end and we, the readers, are thoroughly entertained throughout.

Oft compared to our own Jane Austen, Ms. Thirkell is a genius at setting place, crafting a plot and at writing sometimes over-the-top yet wholly believable dialogue. After reading any of the Barsetshire novels, who wouldn’t want to spend a few weeks in the English countryside?

From the Powell’s Books website: “In High Rising, Mrs. Morland, a widowed author, must attend to the deeper problems of country life while her son Tony drives everyone to distraction with his amazing combination of toy trains. Here Mrs. Thirkell demonstrates the characteristic style for which she is known and for which readers love her. This is fiction replete with gentle irony, grave absurdity, and urbane understatement. This novel introduces one of Angela Thirkell’s most beloved characters–Laura Morland, a novel-writing widow and mother of four who strongly resembles Thirkell herself. In High Rising, Laura receives a marriage proposal from her publisher, who really loves Sibyl, the daughter of Laura’s neighbor; Dr. Ford has feelings for Laura’s secretary, Anne; and attractive but neurotic Una is determined to marry her employer. And in Tony, Laura’s youngest son, Thirkell has created one of the most exasperating small boys in fiction. This is the first of the Barsetshire novels.”

If you haven’t yet read Thirkell (above), do. If you have, read them again. Oh, Barsetshire is sheer bliss. You can learn more about Angela Thirkell at the Thirkell Society’s website here.

3 thoughts on “On The Shelf – High Rising”