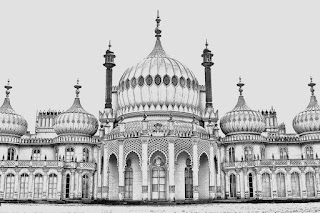 — The King and Queen arrived at the Pavilion at Brighton on Saturday afternoon in a travelling chariot, preceded by outriders. On their Majesties’ arrival a Royal salute was fired from the battery, and a peal was rung on the bells of St Nicholas’ tower. In the evening the town was enlivened with a brilliant display of fire-works, which was seen by their Majesties and suite from the windows of the Palace.

— Prince Esterhazy and his son have left Chandos House for Sudbourne Hall, the magnificent seat of the Marquis of Hertford, in Suffolk, which, since the departure of his Lordship for Italy, has been entitled ‘ Paradise Lost.’ The Prince from his long residence here is on the closest terms of intimacy with the Noble Marquis,who has accorded permission to his Highness and other persons of note to shoot over his preserves, which swarm with game from Sudbourne. The Prince proceeds to the Duke of Grafton’s, at Euston, for a week.

— The venerable Earl of Arran is seriously indisposed at Arran Lodge, Bognor.
— Sir Augustus Clifford, the Usher of the Black Rod, and his lady, the daughter of the late Lord John Townshend, are on their annual visit to his Grace the Duke of Devonshire, at Chatsworth, where a party of the Cavendish family are assembled. Sir Augustus Clifford, we believe, has not yet taken possession of the pleasant residence appended to his office, which is situated on the verge of the Thames, immediately behind the House of Lords. The house is, however, in a dilapidated condition, and will require substantial repairs before it can be fit for the reception of his family.
Court Carriages. — At the Congress of Vienna, the Emperor of Austria wishing that none of the Sovereigns or persons of their suite should use any carriages but his, ordered three hundred to be prepared all alike. At every hour of the day ai:d night, these carriages were at the service of his illustrious visitors—some of them with four horses, others with two, were to be met with in every direction.

— The Duke and Duchess of Leeds have been entertaining their relatives and friends at his Grace’s splendid establishment, Hornby Castle. Mr and Lady Charlotte Lane Pox have been staying during the last week at Gwydyr House, the magnificent mansion purchased by the Duke from Lord Willoughby d’Eresby. They return to Yorkshire in a few days.

— On Wednesday week, Earl Grey gave a Ball to his domestics, and their friends and acquaintances, at Howick Hall, amounting to nearly 200. Dancing commenced about nine o’clock, and was kept up with great spirit until five o’clock in the morning, when the company separated highly gratified. In the course of the evening, the Noble Earl and his amiable Countess, Viscount and Viscountess Howick, the Honourable Colonel and John Grey, Lady Georgiana Grey, Sir Henry and Lady Grey, of Falloden, the Hon. Mr, Mrs and Miss Ponsonhy, Lord Russell, and the Hon. H. T. Liddell, honoured the company with their presence, and part of them joined in the dance. It was held in the great entrance hall, and refreshments were served up to the company in the true style of old English hospitality.

1 thought on “Excerpts from The Court Journal”