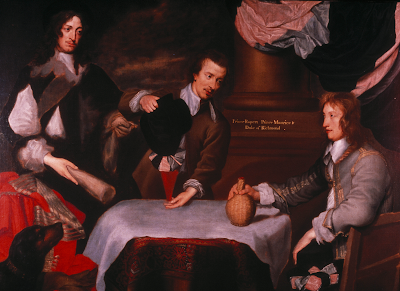 On the third landing at Ashdown House hangs a splendid group portrait of three prominent cavaliers. The artist is William Dobson, court painter to King Charles I, and the picture was painted in about 1644, during the English Civil War, when Charles’ court was based in Oxford. The names that are painted onto the picture are those of Prince Rupert of the Rhine, his brother Prince Maurice and the Duke of Richmond. This is the first mystery about the painting – the names of the sitters were added at a later date and two of them are incorrect. Whilst Prince Rupert is definitely the focal point of this painting, his comrades are Colonel Murray and Colonel Russell. A second mystery is why the painting is unfinished. The detail on Prince Rupert’s clothes has not been completed and there is no glass containing the red wine. We can speculate that perhaps the person who originally commissioned the painting never returned from the wars to pay for it. 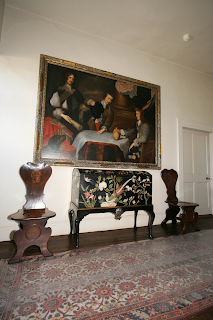 It is entirely appropriate that this portrait should hang at Ashdown, a hunting lodge built circa 1662 for William, First Earl of Craven. Craven was a lifelong supporter of the Royalist cause and an ardent admirer of Prince Rupert’s mother, the beautiful and charismatic Elizabeth, Queen of Bohemia, the Winter Queen. It was Elizabeth who bequeathed to William Craven the splendid portrait collection that hangs in Ashdown House today. Craven and Rupert were friends and comrades in arms during the 30 Years War that ravaged Europe during the early years of the 17th century. Craven was also the executor or Rupert’s will and guardian to his illegitimate daughter Rupertina.

The Dobson Picture, as we call it, is packed full of symbols of loyalty. It portrays Prince Rupert as the saviour of the Royalist cause. His colours, the pink, the grey and the black, swathe the pillar of strength in the back of the picture. The same colours are on the cockade that is being dipped into the red wine, which will be raised in loyal toast to the King. The crossed gloves symbolise politics and the monarchy. The picture also contains the ultimate symbol of loyalty – a dog with Prince Rupert’s initials monogrammed onto its collar. It is gazing up at Rupert with devotion.

Rupert was renowned for his love of animals, a curious and rather endearing trait in a man also known for his ferocity in battle. In this he was said to take after his mother who preferred “her dogs, her hunting and her monkeys” to her children, apparently in that order. Her preference for her pets may explain why Elizabeth of Bohemia was estranged from all of her children at one time or another. There is a story that relates that when Elizabeth and her family were forced to flee Bohemia after the Battle of the White Mountain in 1620, the butler was going through the palace to make sure that nothing valuable had been left behind and found Rupert, three years old at the time, abandoned in the nursery. He picked the child up and hurried after Elizabeth’s carriage, only to discover that she had made sure that her pet monkey Jacko was safely installed inside! 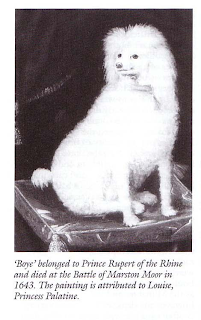 Prince Rupert’s most famous dog was a Standard Poodle called Boy who ran with his cavalry. Boy was a particular target for the Roundheads, who became obsessed with the idea that he was Rupert’s familiar and attributed to him various magic powers, including that he was fluent in various languages, that he was invulnerable in battle and that he could put a spell on the enemy. Boy began to feature in Roundhead propaganda. A pamphlet of 1643 “Observations upon Prince Rupert’s Dogge called Boy” reported that Boy sat beside Rupert in meetings of the King’s Council and that Charles I allowed him to sit on the throne. Boy attended church services and was the toast of the Royalists after various victories. The Roundheads tried both poison and prayer to destroy “this Popish, profane dog, more than halfe a divill, a kind of spirit.” Although the dog was a white poodle they portrayed him as black in the pictures in order to associate him more closely with the devil.

Perhaps inevitably, Boy fell prey to a Roundhead bullet at the Battle of Marston Moor and proved not to be invulnerable after all. The Puritans claimed in another pamphlet “A Dog’s Elegy or Rupert’s Tears” that Boy had been killed by a valiant soldier who had skill in necromancy. The verse ran: “Lament poor cavaliers, cry, howl and yelp, For the great losse of your malignant whelp.” Poor Boy! In an age of superstition it is easy to see how men might attribute magic powers to such a creature and also why the enemy might use Boy as a symbol of the Royalist cause. In the same way it is easy to see how Boy was a talisman and mascot to the Royalists who mourned his loss very deeply. He went down in the army records as the first official British Army Dog, which seems a fitting tribute to a loyal pet.

Ashdown House is currently undergoing a major conservation project that will see the repair of the roof, balustrade and cupola, the restoration of the white chalk walls to their original dazzling glory and the renovation of the interior. “Hard Hat Tours” up the scaffolding will be offered from April 2012 to see the conservation in action. The progress of the project and much more information on the history of the house can be found online at www.ashdownhouse.blogspot.com