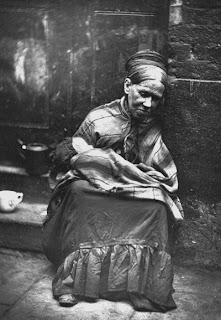 From Memoranda; or, Chronicles of the Foundling Hospital by John Brownlow (1847)
“. . . . the difficulty which presented itself paramount to all others, related to the manner in which so great a number of children was to be reared. In the first year of this indiscriminate admission, the number received was 3,296; in the second year, 4,085; in the third, 4,229; and during less than ten months of the fourth year (after which the system of indiscriminate reception was abolished), 3,324. Thus, in this short period, no less than 14,934 infants were cast on the compassionate protection of the public! It necessarily became a question how the lives of this army of infants could be best preserved; and the Governors, not being able to settle this point among themselves, addressed certain queries to the College of Physicians, which were promptly answered, by recommending a course of treatment consonant to nature and common sense! Children, deprived as these were of their natural aliment, required more than usual watchfulness; and although, on a small scale, the providing a given number of healthy wet-nurses, as substitutes for the mothers of infants, would have been an easy task, yet, when they arrived in numbers so considerable, the Governors found that the object they had in view must necessarily fail from its very magnitude.
“It has been truly said, that the frail tenure by which an infant holds its life, will not allow of a remitted attention even for a few hours: who, therefore, will be surprised, after hearing under what circumstances most of these poor children were left at the Hospital gate, that, instead of being a protection to the living, the institution became, as it were, a charnel-house for the dead! It is a notorious fact, that many of the infants received at the gate, did not live to be carried into the wards of the building; and from the impossibility of procuring a sufficient number of proper nurses, the emaciated and diseased state in which many of these children were brought to the Hospital, and the malconduct of some of those to whose care they were committed (notwithstanding these nurses were under the superintendence of certain ladies—sisters of charity), the deaths amongst them were so frequent, that of the 14,934 received, only 4,400 lived to be apprenticed out, being a mortality of more than seventy per cent.”

“The children are all disposed of by apprenticeship: the girls at the age of fifteen to domestic service, for a term of five years, and the boys at the age of fourteen as mechanics, &c. for a term of seven years. The trades to which the latter have been apprenticed during the last seven years are as follows, viz.:— tailors, sixteen; boot and shoe makers, sixteen; fishermen, seven; cabinet makers, four; linen drapers, three; confectioners, two; bakers, two; gold beaters, two; hair dressers, three; hair manufacturers, two; silver smith, one; opticians, two; tin plate worker and ironmonger, ‘one; general provision dealer, one; weaver, one; law writers, two; watch maker, one; pawnbrokers, three; soda water manufacturer, one; cooper, one; dyer, one; paper hanger, one; furnishing undertaker, one; brass, copper, and iron wire drawer, one; silk hat manufacturer, one; domestic service, four; in all eighty apprentices. A very satisfactory report was recently made of their conduct and destination, four only excepted. These have left their masters, owing to disagreements; but are believed to be leading reputable lives.

With respect to the girls, it appeared by a recent investigation, that of all those apprenticed during the last five years, there was only one whose conduct had been faulty, and she was redeeming her character by subsequent good behaviou
r.

Whilst running a charity of such a size was not without its problems, some might say horrors, over the centuries, thousands of children’s lives were saved:  some 27,000 children, before the 1952 Children Act changed the way charities operated.  The Foundling Hospital finally closed its doors in 1954 and became the Thomas Coram Foundation for Children, which continues to benefit the children of London to this day.