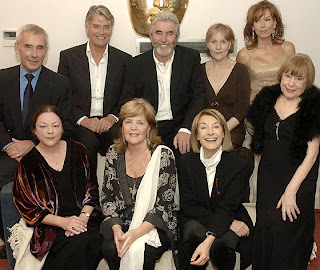 When the original Upstairs, Downstairs aired 40 years ago, the series about life in Edwardian England was watched avidly by 300 million viewers in 50 countries and won five Emmy Awards in the United States. With the beginning of the new series (see our previous post here) to be aired on BBC One and BBC HD on 26th, 27th and 28th December, we got to wondering about what had happened to the original cast members in the intervening years. So, as our Christmas Eve present to you, here’s what we’ve found – 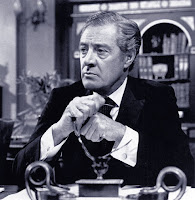 David Langton – Richard Bellamy – After his success in “Upstairs, Downstairs,” Mr. Langton appeared on television as a Cabinet minister in “Winston Churchill: The Wilderness Years” in 1981, as Prime Minister Lord Asquith in “Number 10” in 1983, and as Lord Mountbatten in the television film “Charles and Diana: A Royal Love Story” in 1982. Before “Upstairs, Downstairs,” the Scottish-born Mr. Langton spent most of his acting career in the theater, playing supporting roles in London’s West End, but he also did some film work. Movies in which he appeared included Richard Lester’s Beatles film, “A Hard Day’s Night,” in 1964, “The Pumpkin Eater” in 1964 and “The Whistle Blower,” with Michael Caine, in 1986. He died in 1994 at the age of 82. 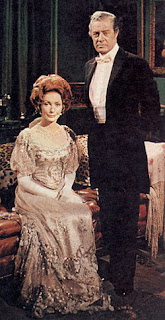 Rachel Gurney – Lady Marjorie Bellamy – After the success of the first two series of Upstairs Downstairs, she decided to move on to other work. The show’s writers, who prided themselves on their inclusion of historical events in the narrative, duly wrote her out, and Lady Marjorie left for America on the maiden voyage of the Titanic.
After Upstairs Downstairs her television work continued alongside her successful stage career, which included roles in J B Priestley’s Dangerous Corner (1974) with Gerald Flood and Barbara Jefford, and Richard III (1989) in which she played the mother of Richard (Derek Jacobi). She was modest  modest to a fault – when a producer offered her a part she was inclined to shake her head sadly and murmur: “I’m not really right for it, you know. Why don’t you get Faith Brook?” Indeed she had to be persuaded to take the part of Lady Marjorie., a role which generated fan mail for Gurney until the end – she passed away in 2001 at age 81. 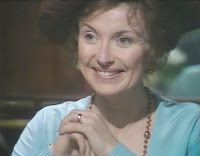 Hannah Gordon – Virginia Bellamy -Gordon was just 33 when she played Viscountess Virginia Bellamy, Richard’s second wife. Gordon has kept busy, with roles in television (Midsomer Murder), on the stage and she does a tremendous amount of voice work, everything from animated features such as “Watership Down” to BBC radio plays and a plethora of audiobooks. In 1983 Kordes of Germany bred a floribunda rose which they named Hannah Gordon in her honour.She also presented “Watercolour Challenge,” a daytime television programme broadcast in the United Kingdom on Channel 4 from 1998 until 2002. In the programme three amateur artists are given four hours to paint the same scene or landscape, often with widely different interpretations. 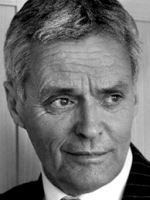 Simon Williams – Oh, James, James, James. We hated him, w
e felt terrible when he committed suicide. As the series heart-throb, Williams played arrogant Major James Bellamy, who was briefly sent to India after getting maid Sarah pregnant, who later married Hazel and then spent the final years of his life pining for his cousin Georgina. When the series ended, Williams went on to make a career of playing upper-class roles in many t.v. shows, including Dr. Charles Cartwright in “Don’t Wait Up” and most recently Sir Charles Merrick in “Holby City.” He also has a successful career writing thrillers and plays and is to guest on a forthcoming Season Four episode of Murdoch Mysteries, a period drama made for Canadian TV about a police detective working in Toronto at the turn of the century. In addition, once the sell-out production of Jonathan Lynn and Antony Jay’s play Yes, Prime Minister ends its London run at the Gielgud Theatre on 15 January, Williams will join the cast to on a UK-wide tour as Cabinet Secretary Sir Humphrey Appleby, with Richard McCabe as Prime Minister Jim Hacker. Click here to read Williams’ behind-the-scenes article on making the original series and his own thoughts on James Bellamy.

Meg Wynn Owen – Hazel Bellamy. Originally Hazel Forrest and secretary to Major James Bellamy’s father Richard, she married the major after she comforted him over his mother’s death on the Titanic. Meg as since worked consistently in television and film. Recent film roles include character parts in Gosford Park, Love Actually and Pride and Prejudice. Most recently, Meg is playing the mother in the British sitcom Family Business.

Leslie-Ann Down – The undisputed beauty of the series, she played orphaned Georgina Worsley. Memorably, Miss Worsley accidentally killed a working class man after  borrowing the family car and driving down to the country while swilling champagne. The London-born star appeared in films The Pink Panther Strikes Again, A Little Night Music and Hanover Street opposite Harrison Ford and played Stephanie Rogers in Dallas in the early Nineties. Now iving in Los Angeles, she has played Jacqueline Payne Marone in the soap The Bold and the Beautiful since March 2003. 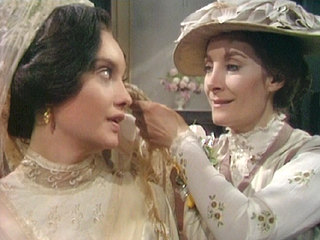 Nicola Pagett – Lady Elizabeth Kirbridge – Poor Elizabeth, she had no luck at all with men and finally moved to America to seek happiness. After leaving the series, Pagett went on to played the title role in a 1977 BBC adaptation of Anna Karenina, and she gave a memorable performance in David Nobbs’s TV series ‘A Bit of a Do’. She was in a variety of films including The Viking Queen and Oliver’s Story. Pagett also played a lead role in the 1994 to 1995 sitcom Ain’t Misbehavin’.

Nicola Pagett has suffered from manic depression, and chronicled her experiences with this in a 1998 book titled Diamonds Behind My Eyes. In 1995, while appearing in What The Butler Saw at the National Theatre, she began behaving erratically and was ultimately diagnosed as having acute manic depression. During this time she developed an obsession with Alastair Campbell, who used this obsession to distract attention from negative headlines about the New Labour Party Conference. She was later escorted from her home by four men to be confined in a closed psychiatric unit, but has since been able to control her illness with medication and self-awareness. 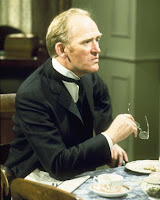 Gordon Jackson – Angus Hudson – The stern, bible quoting Mr. Hudson ran 165 Eaton Place with an iron hand, while at times his soft side w
as hard to conceal, as when he offered to marry Mrs. Bridges after she’d stolen a baby. Jackson was an accomplished actor who appered in several films including
“Mutiny on the Bounty”(1962), “The Great Escape”(1963), “The Ipcress File”(1965)and “The Prime of Miss Jean Brodie”(1969) before joining the series. Afterwards, he went in to star in the series “The Professionals.” Jackson died in 1990 at age 66. You can watch the news item about his passing here. 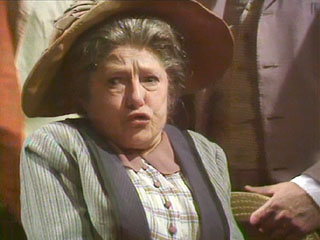 Angela Baddeley – Mrs. Bridges – Older sister to the actress Hermoine Baddeley, Angela made her stage debut at the age of 8 in 1912  at the Dalston Palace in London in a play called The Dawn of Happiness. She had a long career, but will always be remembered best as Mrs. Bridges, the cook at 165 Eaton Place (“Oh Ruby!”) Following the suicide of Emily, her first kitchen hand, Mrs. Bridges had a breakdown and kidnapped a child but with the help of the Bellamy’s she managed to escape punishment for it. In the series finale she married Mr Hudson after hints of a romance between the pair for years. Baddeley was set to reprise the role of Mrs Bridges in a spin-off from Upstairs, Downstairs which would have focused on Mr Hudson, Ruby and her running a boarding house by the sea. However, in February of 1976 she died in London of pneumonia at the age of 71. Her last role was on the London stage in the second cast of Stephen Sondheim’s A Little Night Music. You can watch an interview with the actress here. 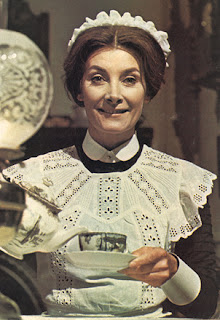 Jean Marsh – The co-creator of the series (with fellow actress Eileen Atkins), she played formidable parlourmaid Rose Buck. Marsh and Atkins also co-created the hit series House of Eliott. In the original series, Rose was always there as a shoulder to cry on for the rest of the staff, or as someone in whom to confide secrets, as Sarah did regarding her affair with James. Rose herself found no luck in love – her finace Gregory died on the battlefield and she lost all the money he left her in his will to James’s investments in the stock market. Since the series ended, Marsh has maintained a very busy career in the theatre and on TV- including a starring role in the US sitcom “9 to 5” (1982) and films such as “Return to Oz” (1985) and “Willow” (1988). 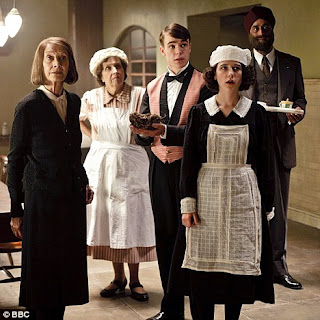 Marsh will again play Rose in the new version of U/D, but this time her position in the household will be housekeeper. Marsh can be seen on the left in this photo.

Christopher Beeney played Edward Barnes the footman, who later went on to marry housemaid Daisy Peel. When Edward returned from the Great War he was depicted as suffering from shell shock. Beeney was a regular on the UK’s first soap opera The Grove Family. He went on to star in the comedy In Loving Memory. In recent years has cameoed on Last of the Summer Wine.

John Alderton played Thomas Watkins the moustachioed chauffeur, a character Alderton himself described as “a conniving, thieving, chauvinistic baddie.” The series also featured his wife Pauline Collins. They went on to star together in the spin-off drama Thomas and Sarah. Before playing Watkins, he starred in the classic sitcom Please, Sir! and later appeared in the sitcom No Honestly and Wodehouse Playhouse. Alderton has also made appearances in James Herriot’s 1975 film It Shouldn’t Happen To A Vet and in the 2003 movie Calendar Girls. Most recently, Alderton  played Christopher Casby in the 2008 BBC adaptation of the Dickens classic Little Dorrit. 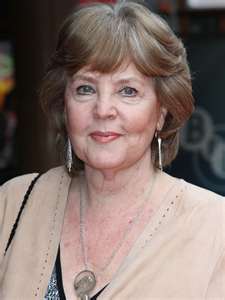 Pauline Collins – The real life wife of John Alderton, Collins played maid Sarah Moffat, who became pregnant by Major James Bellamy before beginning a relationship with the chauffeur Thomas. Best known for Bafta-winning title role in 1989 film Shirley Valentine. After Shirley Valentine, Collins again starred alongside her husband in the popular ITV drama series Forever Green in which the couple escape the city with their children to start a new life in the country. It ran from 1989 to 1992 over 18 episodes. In 2005, she starred alongside Gillian Anderson in BBC’s version of Bleak House, playing Miss Fite.  Collins was awarded an OBE in 2001.

Jenny Tomasin played dim-witted and downtrodden scullery maid Ruby Finch, replacing Emily, a maid who committed suicide. After Upstairs, Downstairs ended, Tomasin joined the cast of Midland based soap Crossroads playing waitress Florence Baker, who was close friends with the infamous Benny Hawkins. The actress remained with the Motel soap until 1979. In the 1980s she made a memorable appearance in Doctor Who during Colin Baker’s tenure as the Doctor. Her character, Tasambeker, was exterminated by the Daleks. More recently Tomasin appeared in ITV soap Emmerdale before her character, Noreen Bell, was killed off.

You can watch most of the surviving cast members discussing the series and their roles in The Making of Upstairs, Downstairs beginning here.