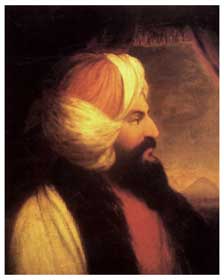 London has seldom seen a more remarkable foreigner than Giovanni Baptista Belzoni who, in a lifetime spanning just forty-five years, was barber, monk, acrobat, engineer, traveller and popular author. Belzoni’s Exhibition drew Londoners to the Egyptian Hall in 1821 to see the Theban tomb and mummy. Belzoni had been born in Padua in 1778, where his barber father educated his son to be a monk. However, wanderlust filled the young Belzoni’s breast and in 1803 he arrived in England in order seek his fortune.

Belzoni was a giant of a man, standing six foot and seven inches tall, and turned his hand to performing at Sadler’s Wells Theatre, where he took the stage name of The patagonian Samson and displayed feats of strength. He went on to give performances at Astley’s Royal Amphitheatre, Bartholomew Fair and in scores of towns throughout the British Isles. Saving up a nest egg, Belzoni married an Englishwoman and then turned his mind to engineering, specifically to the study of hydraulics. This led him to the scheme that he might go to Egypt and instruct the populace on a method of raising water.

In 1815 Belzoni went to Cairo to offer to Mohammed Ali Pasha, the founder of modern Egypt, a hydraulic machine he had invented, which worked extremely well. While in Egypt he met the British Consul General, Henry Salt, who engaged him to travel to Thebes to remove the colossal stone head of Rameses II (The Young Memnon) to be delivered to the British Museum. His success prompted Henry Salt to further Belzoni’s expeditions to the temple of Edfu, Philae and Elephantine, where he cleared the great temple of Rameses II at Abu Simbel, excavated at Karnak, and in 1817 discovered the tomb of the pharaoh Seti I, in the Valley of the Kings. Belzoni was the first person to penetrate into the second pyramid of Giza (1818) by using his engineering genius to locate the entrance to the inner chambers, and the first European to visit the oasis of Siwah, and identify the ruined city of Berenice on the Red Sea. 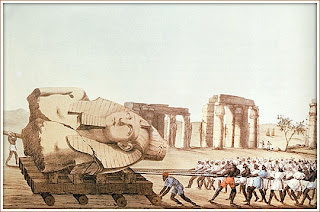 Belzoni used hundreds of Egyptian peasants in 1815, and recorded this feat of
archaeological engineering in this famous coloured drawing.

Upon his return to England, Belzoni was lionized by society and struck up a friendship with publisher John Murray, who published Belzoni’s Narratives of the Operation and recent Discoveries within the Pyramids, Temples, Tombs and excavations in Egypt and Nubia. Byron’s take on the book was this, “Belzoni is a grand traveller, and his English is very prettily broken.” No matter, the book saw three printings.

From Dr. Smiles book, The Memoirs of John Murray, we get the following account of George IV’s coronation and Belzoni’s part in it: “Like many other men of Herculean power, Belzoni ws not eager to exhibit his strength, but on one occasion he gave proof of it. Mr. Murray had asked him to accompany him to the coronation of George IV. They had tickets of admission to Westminster Hall, but on arriving there they found that the sudden advent of Queen Caroline, accompanied by a mob claiming admission to the Abbey, had alarmed the authorities, who had caused all the doors to be shut. That by which they should have entered was held close and guarded by several stalwart janitors. Belzoni thereupon advanced to the door, and in spite of the efforts of these guardians, including Tom Cribb and others of the pugilistic corps who had been engaged as constables, opened it with ease, and admitted himself and Mr. Murray.”

Unfortunately, Belzoni still retained his wanderlust and sense of adventure and embarked for Timbuctoo in 1823. In Benin, he was seized by dysentery and died. A statue to Belzoni was raised in his native Padua and the city of Belzoni, Mississippi was named in his honour. His widow eventually received a small pension from the British Government and, in 1829, published his drawings of the royal tombs at Thebes.