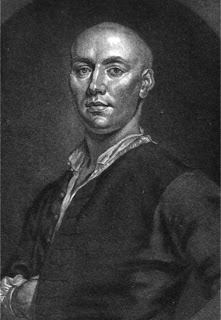 A prize fighter buried in Westminster Abbey? Can this be true? The pugilist in question is no other than Jack Broughton (at left), who is often described as the founder of the British School of Boxing. “Broughton’s Rules ” were long held sacred in the prize-ring, and are still regarded as the alphabet of pugilistic law.

Born in I704, Broughton began his career as a Thames waterman, and he was the first man who won Doggett’s Coat and Badge. He made his appearance as a professor of self defence at George Taylor’s famous booth at the “Adam and Eve ” at the head of the Tottenham Court Road. There he defeated his master, and was encouraged to set up a larger and more convenient amphitheatre on his own account. Seceding from the Tottenham Court Road establishment, he rapidly built a new prize-ring adjoining the Oxford Road, near the spot where Hanway Street, Oxford Street, now stands, and opened it on March 10, I743. From prints in the British Museum, it appears that this building was somewhat similar to Astley’s original circus and riding school in the Westminster Road; there were boxes, pit, and a gallery; a stage for the combatants in the centre of the ring, and the tout ensemble bore some resemblance to the pictures of the Old Fives Court in Windmill Street. 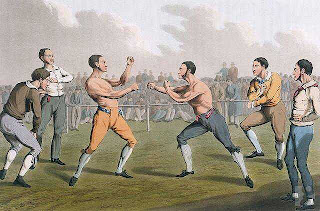 The most significant sign of Broughton’s success was the promulgation of his own “Code” for the guidance of combatants, and the satisfaction of the judges. This was produced by Mr. Broughton, for the better regulation of the amphitheatre, and approved of by the gentlemen, and agreed to by the pugilists, August 18th, 1743. These rules lasted in perfect integrity from the period of their date until 1838, when after the fight between Owen Swift and Brighton Bill, the ” New Rules of the Ring ” superseded Broughton’s. We here give the original

(I) That a square of a yard be chalked in the middle of the stage; and every fresh set-to after a fall, or being parted from the rails, each second is to bring his man to the side of the square, and place him opposite to the other; and till they are fairly set-to at the lines, it shall not be lawful for the one to strike the other.

(2) That, in order to prevent any disputes, the time a man lies after a fall, if the second does not bring his man to the side of the square, within the space of half a minute, he shall be deemed a beaten man.

(3) That, in every main battle, no person whatever shall be upon the stage, except the principals and their seconds; the same rule to be observed in bye-battles, except that in the latter, Mr. Broughton is allowed to be upon the stage to keep decorum, and to assist gentlemen in getting to their places; provided always, he does not interfere in the battle; and whoever presumes to infringe these rules, to be turned immediately out of the house. Everybody is to quit the stage as soon as the champions are stripped, before they set-to.

(4) That no champion be deemed beaten unless he fails coming up to the line in the limited time; or that his own second declares him beaten. No second is to be allowed to ask his man’s adversary any questions or advise him to give out.

(5) That, in bye-battles, the winning man to have two-thirds of the money given which shall be publicly divided upon the stage, notwithstanding any private agreements to the contrary.

(6) That, to prevent disputes, in every main battle, the principals shall, on the coming on the stage, choose from among the gentlemen present two umpires, who shall absolutely decide all disputes that may arise about the battle; and if the two umpires cannot agree, the said umpires to choose a third, who is to determine it.

(7) That no person is to hit his adversary when he is down, or seize him by the ham, the breeches, or any part below the waist; a man on his knees to be reckoned down.

These rules have been called the groundwork of fair play and manly boxing, and no man, from his experience, was better able to frame such a code than Broughton. To them, says the author of “Fistiana,” we greatly owe “that spirit of fair play which off ers so wide a contrast to the practices of barbarous ages, when every advantage was admissible where brute strength or accidental casualties placed a combatant in the power of his antagonist. It is to be lamented that, even in modern times, the inhuman practices of uncivilised periods have subsisted to a disgraceful extent, and hence we have heard of gouging, that is to say forcing out the eye of an antagonist with the thumb or finger; purring, kicking a man with nailed shoes as he lies on the ground, striking him in vital parts below the waistband, seizing him when on his knees, and administering punishment till life be extinct, and a variety of other savage expedients by which revenge or passion has been gratified; and it is remarkable that in those counties in which pugilism or prizefights have been least encouraged, these horrors have been most frequent ; we refer to -shire in particular, where, even to this day, that species of contest, called up-and-down fighting, that is when a man has got down he is kept down and punished, incapable of motion, is permitted with impunity, unless indeed the death of the victim leads to the apprehension and trial of the survivor.”

To Broughton also the Ring owed the introduction of gloves. He thus announced his new invention in the Daily Advertiser of February 1747 –

Mr. Broughton proposes, with proper assistance, to open an academy at his house in the Haymarket, for the instruction of those who are willing to be initiated in the mystery of boxing, where the whole theory and practice of that truly British art, with all the various stops, blows, cross-buttocks, &c., incident to combatants, will be fully taught and explained; and that persons of quality and distinction may not be debarred from entering into a course of those lectures, they will be given with the utmost tenderness and regard to the delicacy of the frame and constitution of the pupil; for which reason mufflers are provided, that will effectually secure them from the inconveniency of black eyes, broken jaws, and bloody noses.

Broughton, after fighting several years, and maintaining his ascendancy, was at length vanquished by one Jack Slack, a Norwich butcher, in April I750, at Broughton’s Amphitheatre. Some thousands were lost on the unexpected defeat; and nearly 150 pounds were taken at the door, not counting many tickets sold at a guinea and a half each, all of which went to Slack, who is supposed to have gained nearly 600 pounds by his victory. After this defeat Broughton never fought again; and his amphitheatre was shortly after shut up. The Duke of Cumberland, his principal patron and backer, lost 10,000 pounds on this contest.

Broughton died, January 8, I789, at Walcot Place, Lambeth, in his eighty-fifth year.

Captain John Godfrey, who wrote a ” Treatise on the Science of Defence,” thus apostrophises Broughton:

“Advance, brave Broughton! Thee I pronounce Captain of the Boxers.
As far as I can look back, I think I ought to open the characters with him ; I know none so fit, so able, to lead up the van. This is giving the living preference to the rest. What can be stronger than to say that, for seventeen or eighteen years, he has fought every able boxer that appeared against him, and has never yet been beat ? This being the case, we may venture to conclude from it ; but, not to build alone on this, let us examine further into its merits. What is it that he wants ? Strength equal to what is human, skill and judgment equal to what can be acquired, undebauched wind, and a bottom spirit never to pronounce the word ‘Enough.'” 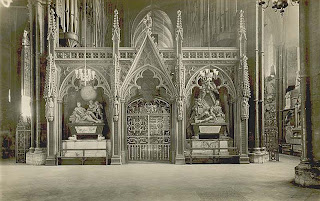 Although many authorities, including the ” Dictionary of National Biography,” once stated that John Broughton was buried in Lambeth Church, the father of modern boxing sleeps peacefully with his wife in the cloister of Westminster Abbey.

How can this be? In the first place it is well to remember that Broughton, after his retirement from the Ring, filled an honourable place in the Yeomen of the Guard, which he held until his death. In Dean Stanley’s “Historical Memorials of Westminster Abbey” it is clearly indicated that Broughton is buried in the West Cloister. His burial here is attested both by a wall tablet and a gravestone in the pavement. Here is the inscription on the wall tablet –

BENEATH THIS TABLET LIES THE REMAINS OF MRS. ELIZABETH BROUGHTON. DIED 7TH DECEMBER, 1784- AGED 59 YEARS. ALSO OF MR. JOHN BROUGHTON, ONE OF HIS MAJESTY’S USHERS OF THE YEOMEN OF THE GUARD. DIED 8TH JANUARY, I789. AGED 86 YEARS.

When it was first erected, the stone showed a gap left after John Broughton’s name. Dean Stanley tells us, on the authority of a communication made by Broughton’s son-in-law to the master mason of the Abbey, that this gap was intended to be filled by the words “Champion of England.” But the Dean objected, and the blank remains.” His headstone did not bear an epitaph for nearly 200 years and it was not until 1988 that Broughton’s request was fulfilled and the words “Champion of England” were engraved on the headstone. 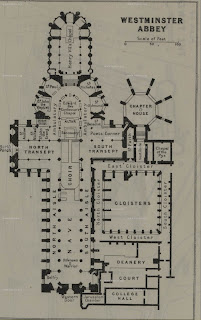 Broughton was buried in the cloister on the lefthand side of his wife (whose burial here in 1784 is itself strong presumptive evidence that her husband was laid here in 1789), but it remarks that whereas “the journals of the day state that he was buried in Lambeth churchyard ” it appears that he was given an honourable interment in the Abbey.’ It will be observed that on the tablet Broughton is described as one of His Majesty’s Yeomen of the Guard. Several such Yeomen are buried in the cloisters, and there is even ground for believing that in his later years Broughton was also a verger of the Abbey. Indeed, Westminster Abbey may be said to contain a statue of Broughton, for the magnificent figure of Hercules in Rysbrack’s monument to Sir Peter Warren in the North Transept was modelled after his gigantic form.

3 thoughts on “The Prize Fighter Buried in Westminster Abbey”