Skip to content
My withdrawal from London was quite acute back in late July, when I found myself browsing the internet for flight deals back to the Old Smoke. Bear in mind that this was just a scant month since my whirlwind London/Waterloo tour with Victoria. However, the symptoms were all there – daydreams of walking down Piccadilly, a nostalgic longing for a pint and a proper serving of bangers and mash, the almost constant urge to throw up my arm and hail a black cab. At odd moments I’d hear a voice in my head urging me to “Mind the gap. Please mind the gap.” Aaarrrggghhh!

And then I found it – Continental Airlines, Newark to London Heathrow . . . . . $345. What!? Okay, that was each way, but still, seven hundred round trip was a bargain. It was at that moment that a small, cheeky devil appeared at my left shoulder. This wasn’t your run-of-the-mill devil dressed in a red suit, with a pointed tail and holding a pitch fork. Oh, no. This devil was dressed in Regency garb and holding a snuff box. He looked uncannily like Beau Brummell.
“Press that button, my dear. The one that says “Buy Now.”
“Don’t be silly. I can’t. I just went to London. My planning another trip to England would be nothing short of greed in piggy proportions.”
“I’ve never found anything wrong with greed, myself.”
“Ha! And look where it got you.”
The devil sniffed. “Be that as it may, I still maintain that you should push that button. Go on,” he cajoled, “push it now.”
“Stop it!”
“You know,” he began, his voice a blend of honey and warm oil, “you could take your husband with you this time. After all, you’ve already been to London twice since you’ve known him. Really, is that fair? I believe he deserves to see the City. . . . you’d be doing it for him.”
This was a novel way of looking at the situation. A very Lucy Ricardo way of looking at it, I might add. He had my attention.
“And,” the devil continued, “you could schedule the trip around Christmas. It could be your Yuletide present to him. In fact, your wedding anniversary is in September, is it not? You could make it a joint anniversary and Christmas gift. Only consider how much more thrifty that would make the expenditure.”
Thrifty? Hhmmm. My husband would like thrifty.
“Push the button.”
“Look, pushing that button is a big deal. I’d be committing myself, and my poor unwitting husband, to a trip to London.”
“Oh, poor dear! London. Such a sacrifice.” The imp removed a miniscule amount of snuff from his tiny snuff box and inhaled it. Once he’d stopped sneezing – into my left ear – he continued. “Push the button. Do it for your mother.”
“My mother? What’s she got to do with it?”
“Oh, for pity’s sake, you’re hopeless at greed justification, aren’t you? It’s a good thing for you I deigned to show up and help you with this. Look, if you go to London, you’ll have to fly out of one of the major New York airports. Yes? Or perhaps a nearby major airport. Say . . . Newark?”
“Right,” I allowed.
“And who lives but a scant few miles from Newark airport, hmmmm?”
“My mother.”
“Got it in one! So . . . you back out your departure date and instead fly into Newark a few days before Christmas. You spend the holidays with your mother and daughter, thus making their holidays joyous whilst removing the onus of their having to travel down to you for the festivities, as they usually do. You, my dear, kill three birds with one English stone. You make your mother, daughter and your husband all happy beyond their wildest dreams. In effect, you wouldn’t be going to London for your own greedy delight in the least. Instead, you’d be going in order to make them happy. And, you and your husband would be in London for New Year’s Eve. Whilst still being thrifty, of course.”
My mouth hung open. Why hadn’t I thought of this? It was nothing short of brilliant.
“Do you really think so?” I asked, already knowing the answer.
“I do. Truly. Push the button.”
Reader, I pushed the button. And just like Lucy Ricardo, I couldn’t keep my big mouth shut until my anniversary. I’ve already told my husband who, thank the Lord, is thrilled to bits, which means that the only fireworks we’ll be encountering will be those over the River Thames on New Year’s Eve. 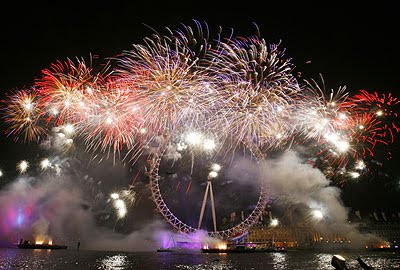