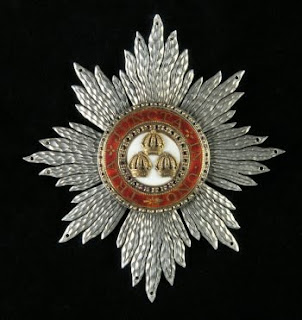 Like the departments Do You Know About? and On the Shelf , When We Win the Lottery will be a regular department on this blog, bringing you items to covet and add to your list of things to buy when that winning ticket finally comes in.

Dominic Winter Book Auctions is previewing the following item from their forthcoming Medals and Military Sale on Wednesday, 14th April.

Order of the Bath – A particularly fine and handsome example of the breast Star of a Civil Knight Grand Cross of the Most Honourable Order of the Bath by Rundell, Bridge, and Rundell, the articulated silver flames pierced in places to allow for sewing to court dress, the central three crowns on white enamel and the outer motto ring “Tria Juncta In Uno” on red enamel, separated by two circlets of small rubies, the reverse engraved Rundell Bridge and Rundell, JEWELLERS to their MAJESTIES and his Royal Highness the PRINCE REGENT, condition EF (extra fine).

In 1815 the Order was re-organised and whilst the Military Division had three classes, the Civil Division retained purely the highest class of Knight Grand Cross. This scarce example of the Civil Division of the Order dates from the five years from then until 1820 when the Prince Regent finally succeeded George III and the royal appointment of the jeweller changed. As a pointer to rarity it can be noted that in 1821 there were 77 Military GCBs but only 13 Civil. Estimated sale price is £600-800.

1 thought on “When We Win the Lottery”