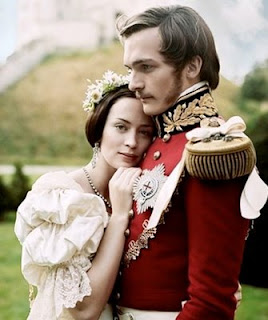 Victoria H. (as opposed to Victoria R) loved this film when she saw it in London in May 2009. And she will buy a copy as soon as it comes out on DVD. It’s still in Kristine’s Blockbuster queue.

We’d love to know what you think of it, so if you’ve already seen it, do tell us all. Wasn’t Emily Blunt wonderful? She even looked the part.

Victoria H. has this warning.  Do not expect the film to be entirely historically accurate. They played a little fast and loose with a couple of aspects.  For the benefit of the drama, of course. 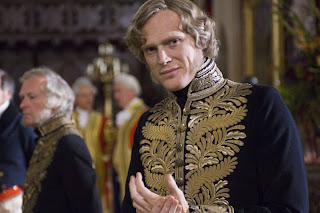 For example, Prime Minister Lord Melbourne was almost 60 when Victoria came to the throne. He might have had a long history of being a ladies’ man (and he had been married to Lady Caroline Lamb, remember), but  he was not the studly figure that Paul Bettany presented in the film, see left. Not that anyone could complain about Paul’s looks.  And Prince Albert did not take a bullet for his bride — he was as uninjured in the attack as she was.

Kristine tells an amusing bon mot regarding Patty Suchy of Novel Explorations . . One year we went to England to do a Queen Victoria tour and arrived a day or so early. The movie Mrs. Brown had just come out and we both wanted to see it, so we went to a cinema in Baker Street, where after buying our tickets we were presented with a floor plan and asked to reserve our seats. And what seats they were – plush red velvet, deep and supremely comfortable. Well, it also happened to have been the day we landed in Merry Old. And you know what air travel does to one. So, here we settled into our seats, the picture started and sometime later I turned to Patty in order to impart some witty aside or other, only to find her fast asleep! She missed the entire film. However, Patty embodies true friendship and after she’d awoken, she said, “Well, as long as you enjoyed it.”  Have you ever!?

4 thoughts on “The Young Victoria”