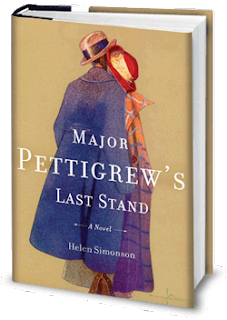 Author Helen Simonson has put a new twist on the traditional village cozy with her first book, Major Pettigrew’s Last Stand, as described in the following snippet taken from her website:  You are about to travel to Edgecombe St. Mary, a small village in the English countryside filled with rolling hills, thatched cottages, and a cast of characters both hilariously original and as familiar as the members of your own family. Among them is Major Ernest Pettigrew (retired), the unlikely hero of Helen Simonson’s wondrous debut. Wry, courtly, opinionated, and completely endearing, Major Pettigrew is one of the most indelible characters in contemporary fiction, and from the very first page of this remarkable novel he will steal your heart.

The Major leads a quiet life valuing the proper things that Englishmen have lived by for generations: honor, duty, decorum, and a properly brewed cup of tea. But then his brother’s death sparks an unexpected friendship with Mrs. Jasmina Ali, the Pakistani shopkeeper from the village. Drawn together by their shared love of literature and the loss of their respective spouses, the Major and Mrs. Ali soon find their friendship blossoming into something more. But village society insists on embracing him as the quintessential local and her as the permanent foreigner. Can their relationship survive the risks one takes when pursuing happiness in the face of culture and tradition?

Well, dear reader, I just finished the book and the glowing reviews floating around the internet are justified. Being a traditionalist when it comes to my village cozies, at first I was hesitant about a modern day novel that featured Pakistanis. Nothing against Pakistanis mind, just against anyone fiddling with a tried and true formula. I was wrong. Simonson didn’t fiddle with it, she improved upon it. Aside from the (welcome, as it turned out) inclusion of non-British characters, everything else you’d expect in a terrific cozy read is there – an assortment of village characters, a great love story, greedy developers, a self absorbed son, crazy aunties and a good dollop of Rule Britannia traditionalism. Did I mention humor?

Oh, yes, something else is present, as well – terrific writing. Here are a few passages I especially loved and which will give you a taste of the tone of this delicious novel:

The wall of the long walnut bar to the west end was hung with arched wood paneling on which racks of bottles were ranged below portraits of past club presidents. A portrait of the Queen (an early portrait, badly reprinted and framed in cheap gilt) hung directly above some particularly vile colored after-dinner liquers that no one ever drank. The Major always found this vaguely treasonable.

“Mr. Ferguson can trace his  lineage to the Ferguson clan of Argyll,” said Hugh Whetstone, who tried to ferret out the genealogy of everyone he met so he could use it against them later.

“I won’t stand for you being disrespectful, Roger,” the Major responded. The current fashion for bandying about stories and jokes, as if the royal family were the cast of a TV soap opera, was deeply distasteful to him.

“Look, I can’t possibly assist you,” said the Major. “I mean, with just losing my brother . . I have so many things to see to . . . family and so on.”
“I understand,” said Grace. She looked at him and he read in her eyes a disappointment that he should have stooped to the dead relative excuse. Yet he was as entitled as the next man to use it. People did it all the time; it was understood that there was a defined window of availability beginning a decent few days after a funeral and continuing for no more than a couple of months. Of course, some people took dreadful advantage and a year later were still hauling around their dead relatives on their backs, showing them off to explain late tax payments and missed dentist appointments: something he would never do.

Like many others, I’m taken aback that Major Pettigrew’s Last Stand is Helen Simonson’s first novel. And like the rest, I can’t wait for her second. You can read the entire first chapter at the The New York Times site.    Kristine

1 thought on “On The Shelf – Major Pettigrew's Last Stand”