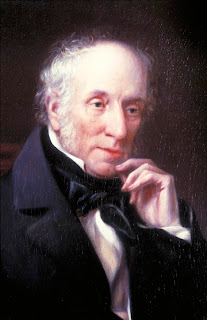 Happy Birthday to William Wordsworth (7 April 1770 – 23 April 1850), once the Poet Laureate of Great Britain (1843-50). We associate his work with the Romantic Movement. He was a close friend and colleague of Samuel Taylor Coleridge. Wordsworth defined poetry as “the spontaneous overflow of powerful feelings: it takes its origin from emotion recollected in tranquility”.

Wordsworth and his sister, Dorothy, lived in the famous Dove Cottage in the Lake District. Later, he moved to a larger nearby home, and married, though Dorothy continued to live with him. William and Mary Wordsworth had five children but only three survived childhood, and beloved daughter Dora died in her thirties.

Here is a fragment of one of his most famous works

Lines Written a Few Miles above Tintern Abbey, on Revisiting the Banks of the Wye during a Tour, July 13, 1798

…For I have learned
To look on nature, not as in the hour
Of thoughtless youth; but hearing oftentimes
The still, sad music of humanity,
Nor harsh nor grating, though of ample power
To chasten and subdue. And I have felt
A presence that disturbs me with the joy
Of elevated thoughts; a sense sublime
Of something far more deeply interfused,
Whose dwelling is the light of setting suns,
And the round ocean and the living air,
And the blue sky, and in the mind of man;
A motion and a spirit, that impels
All thinking things, all objects of all thought,
And rolls through all things. …
Above, Tinturn Abbey by Joseph Mallord William Turner, 1794