Skip to content
Victoria and I are looking forward to the Victoria and Albert: Art in Love exhibit at the Queen’s Gallery, Buckingham Palace. The Exhibition features 400 items from The Royal Collection including gifts exchanged by Victoria and Albert such as drawings, paintings, sculpture, furniture, musical scores and jewellery and encompasses their mutual love of music and art. The display also touches upon Prince Albert’s work on ‘The Great Exhibition of the Works of Industry of all Nations in 1851’ as well Queen Victoria in the years after Albert’s death in 1861.

Works by the couple’s favorite artist, Franz Xaver Winterhalter, are on display, as are photographs taken of the Royal couple. A German painter first recommended to Queen Victoria by Louise, Queen of the Belgians, Winterhalter came to England in 1842 and subsequently worked regularly for the queen and her family over the next two decades. Winterhalter was granted the largest number of royal commissions and produced numerous formal portraits, including the one pictured above, which Queen Victoria commissioned in 1843 as a surprise for her husband’s 24th birthday. The artist presents the Queen in an intimate pose, leaning against a red cushion with her hair half unravelled from its fashionable knot. 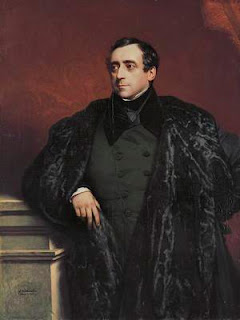 Winterhalter (at left) was born in the Grand Duchy of Baden in 1805. He excelled at painting and drawing as a teen and went to Munich where he studied at the Academy of Arts. By the late 1830’s he drew attention as a painter of royal subjects. He traveled and painted in almost every court of Europe until the last few years of his life. Though art critics were never very enthusiastic about his work, his portraits were well executed and conveniently flattering. 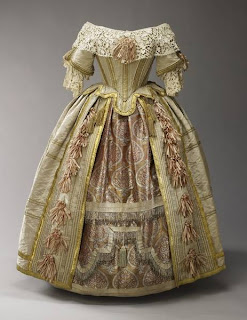 Costumes are also displayed in the exhibit, including Queen Victoria’s costume for the 1851 Stuart Ball  designed by French artist Eugène Lami. The French silk gown is rich in lace and brocade.
You can take a really in-depth video tour of the exhibition here and/or visit the Royal Collection website. 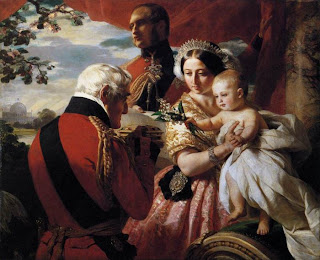 Winterhalter’s The First of May 1851, at right,  shows the Duke of Wellington presenting a casket to his one-year-old godson, Prince Arthur, Duke of Connaught, who is supported by Queen Victoria. Behind these figures and forming the apex of a pyramidal composition is Prince Albert, half looking over his shoulder towards the Crystal Palace in the left background. Both the Duke of Wellington and Prince Albert are dressed in the uniform of Field Marshal and wear the Order of the Garter. The painting derives its title from the fact that both the Duke of Wellington and Prince Arthur were born on 1 May, which was also the date of the inauguration of the Great Exhibition in Hyde Park.
The painting was commissioned by Queen Victoria, but Winterhalter clearly encountered some difficulties in devising an appropriate composition. In the queen’s words, he ‘did not seem to know how to carry it out’ and it was Prince Albert ‘with his wonderful knowledge and taste’ who gave Winterhalter the idea of using a casket, instead of the gold cup the Duke had actually presented to the child. The painting hangs at the Duke’s country home, Stratfield Saye. 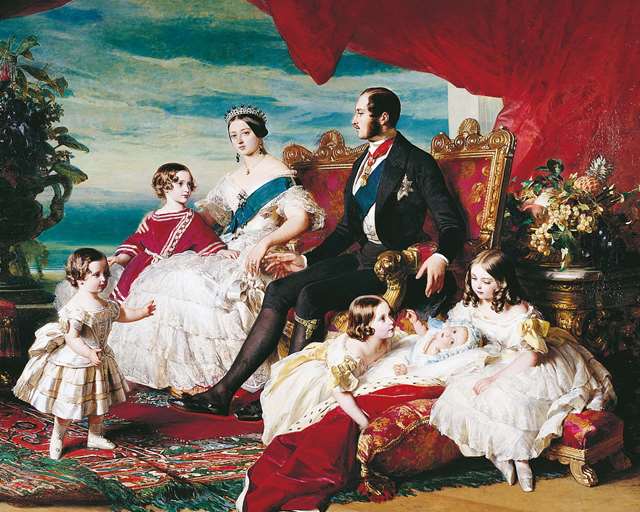 Above, Victoria and Albert with their children in 1846, Buckingham Palace

While in Paris, Brooke and I took a champagne cruise down the River Seine. Here is some video I took during that trip, which ended around sunset.

As I mentioned in a previous post, I purchased a rather large hand colored engraving of the Duke of Wellington at Storey’s in London and had it shipped home. A bit later, Victoria found a smaller version of the exact same print at Gray’s Antiques Market, which enabled us from then on to complete the rest of our Wellington tour with Wellington. 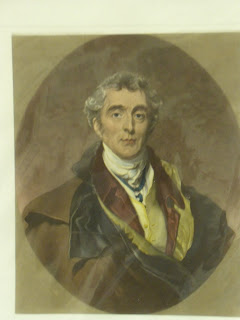 I must say, Victoria and I found the Duke to be everything we’d ever imagined – and more. 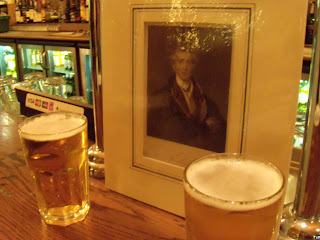 After first meeting up with him, the Duke took Victoria, Brooke and myself for a drink at The Golden Lion pub, St. James’s. Who knew he was such a two fisted drinker!? And the stories he told us . . . he is funny. There was one anecdote the Duke told us about Prinny that involved a dwarf and a footman. That Prinny – what a card! I’d relate the story to you here, but Victoria feels it’s a bit too racy for public consumption. 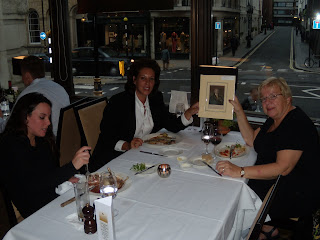 Afterwards, the Duke took us to dinner on St. James’s Street, at an upscale venue called  Just St. James. Of course, we were given a window table with views over the Street when the hostess realized that we were with the Duke of Wellington. However, on the way down the Street towards the restaurant we had passed a venerable building with a uniformed doorman out front. Victoria stopped before him and asked, “What is this building?” Well, honest to Betsy, the man refused to answer. He just looked at us with the tiniest of smiles and kept mum.
Then, Victoria asked, “It’s Boodle’s Club, isn’t it?”
Reluctantly, the man answered, “Yes, madam, it is.”
“Ha! I knew it,” said Victoria, taking the smallest step closer to the man. “Can we come in?”
“Certainly not!”
“Well,” Victoria allowed, “it was worth a shot.”
Of course, we could have pulled out the Duke of Wellington and gained admittance, but we decided to keep him in our back pocket, so to speak. 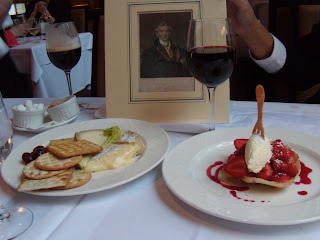 His Grace insisted upon we ladies ordering dessert and, though we demured, we did eventually order a gorgeous cheese plate and fresh English strawberries and cream. And an Irish coffee. And a glass of port.
The Duke also escorted us to many of the lovely garden squares we visited, and to the Lansdowne Club for cocktails. 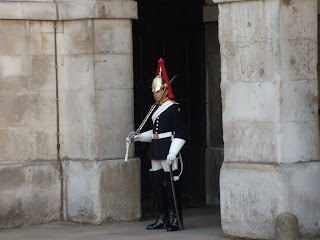 We made a visit to Horse Guards, where the Duke was pleased to find that everything was still ship shape and Bristol fashion. And from there we went to the Grenadier Pub, where we three hoisted a few pints. 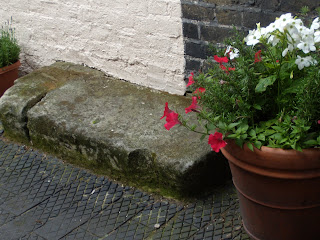 We asked the Duke about the mounting block outside the pub, purported to have been his. “Rubbish!” he exclaimed. “I’ve never needed the aid of a mounting block to mount my horse and still less a paltry sort of mounting block like that one!” 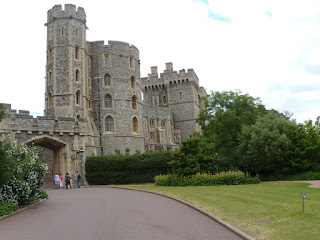 His Grace grew a tad sentimental at seeing Windsor again, what with it’s connections to Queen Victoria. When we asked the Duke if he also remembered George IV with fondness, he replied, “Not so much.”
Though he was the most charming of companions, I must say the Duke was chomping at the bit to get back to his old stomping grounds in Brussels.
The Duke (with description and price tag intact) arrives in Brussels. 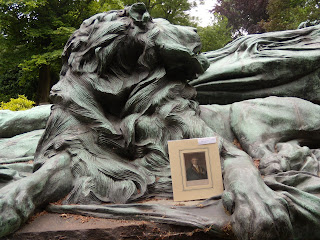 The Duke visits the British Monument to those who fell at Waterloo at a cemetary in Brussels. The poor man . . . . it was a very touching moment. 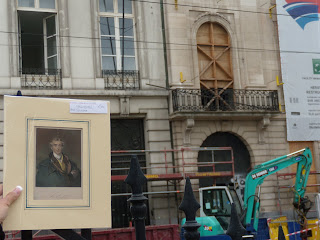 The Duke was disappointed that the building that had been the site of his Brussels Headquarters was being  refaced. Progress, he sighed philosophically,  marches on. 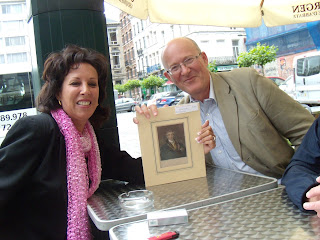 The Duke with two of his fans. On the right is Jeremy Black author of many history books including this one below:

We first visited the French encampment . . . 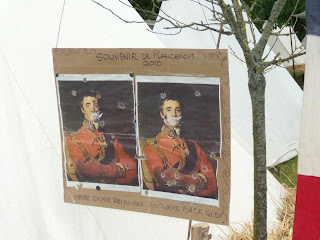 where the Duke was not amused.
Finally . . . . we and the Duke reached Waterloo and the first thing we did was . . . 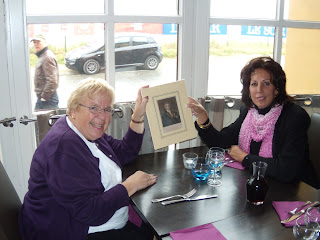 to eat lunch. Oh, and have a drink. Thus fortified, we headed for the Battlefield, 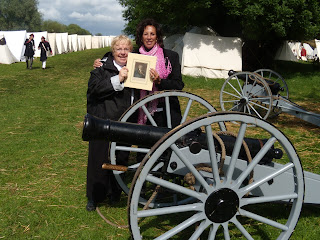 where the Duke spent some time checking out the artillery. 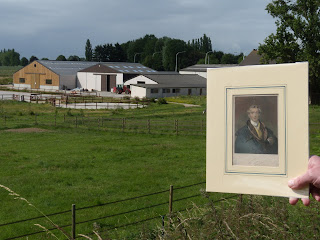 Here we are near the site of the Duke’s greatest victory. 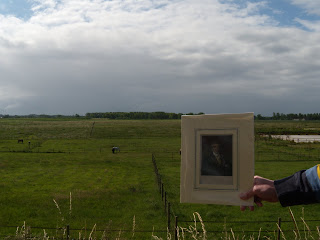 Even in the nastiest weather, the Duke prevailed. 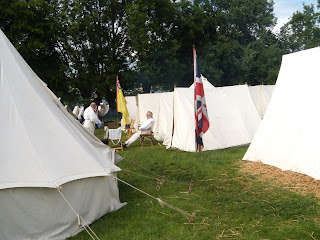 And was pleased to see that his troops were still capable of pitching a demmed fine tent. 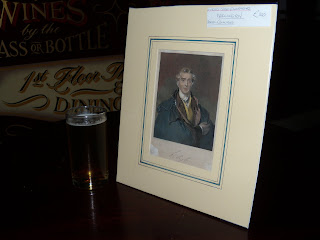 And so our time with the Duke came to an end. Victoria and I will always look back with fondness on our tour with the Duke of Wellington, the sites we visited and the many good times we shared. Having completed many campaigns in his time, the Duke was a real trooper where travel was concerned and planned our outings with military precision. Not to mention the fact that, as a gentleman, he always insisted on picking up the tab. You’ve got to love it.
At the end of the Battle, Michael, a fellow tour mate, helped me down off the Mound and we proceeded to the pub mentioned earlier for a well earned coffee and fortifying brandy. On our way there, we were fortunate enough to get up close to the battlefield and witness some dashing derring-do by men on horseback, which I’ve edited in to the video below.  What the woman beside me was cackling about, I’ve no idea. Anyway, this is what I saw:

Though the rain continued to pour down and a Frenchman on a loudspeaker insisted on narrating the entire bloody Battle (and although people persisted in standing up in front of me and blocking the view), I remained in position on the confounded Mound and stayed to finish filming the action. Actually, it was at about this point that my daughter left me to the elements and hightailed it down to the nearby pub. However, in my guise as your intrepid reporter, I manned my post, aimed my camera . . . and this is what I saw: