I was hoping to get to Brighton this year to see the restored Saloon in the Royal Pavilion, but I am not going anywhere for the time being. So I will pretend I’m going while I present a few pictures and on dits about the latest restoration of this absurdly appealing structure.

I’ve visited the Pavilion several times over the years. I regard it as the perfect representation of the personality and reign of George, Prince of Wales, the Regent for nine years beginning in 1811, and King George IV upon the death of his father George III on 29 January in 1820. In many ways, George IV was a magnificent fellow with excellent taste and great ambitions for improving art, architecture, and design;  in other ways, he was a spendthrift, selfish, narcissistic adulterer  whose unpopularity almost brought down the monarchy.

Like the Pavilion, one could say, magnificent or ridiculous, praiseworthy or laughable. 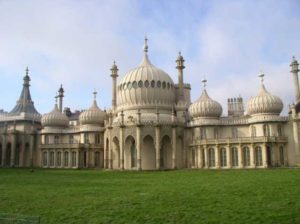 The restoration of the Central Saloon took more than eight years of work. Below is the way it looked when I first saw it, with handsome chinoiserie panels  and subdued draperies and carpeting.

The restoration was based on a painting of the Saloon in 1826 by John Nash, who painted all the royal interiors around this time, and on historical drawings, photos, and accounts

The walls were hand-stenciled in platinum leaf, a process that took several years to accomplish. 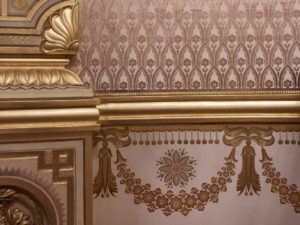 Likewise the draperies were expertly created from the finest silks. 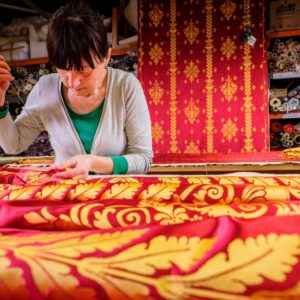 The Guardian wrote: ‘The staggering carpet, a swirling kaleidoscope of flowers, stars, dragons and exotic Chinese birds, had to be reinvented from the hazy detail in a 19th-century watercolour by Anne Sowden, artist and glass conservator for the pavilion, as her last challenge before retirement.

Queen Victoria was not amused by the pavilion and she sold it to the city of Brighton in 1850 after she removed most of the furniture and decorative material, much of which can be found at Buckingham Palace, it is said. Many items have been loaned back to the Pavilion and are on display there.

The magnificent ‘Kylin’ clock, purchased in France for the Saloon,  is decorated  with turquoise-glazed Chinese lions, known as kylins, after a mythical Chinese animal.

The restoration was accomplished for about £380,000, with most work done by in-house experts on the museum staff. They certainly can be proud of their skills. Here are a few more angles on the Saloon. Let’s hope we can return soon! 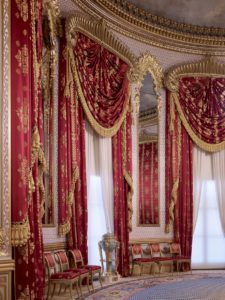