It is that time of year once more! We at Number One London are inordinately fond of Christmas. We kick off the month of December with a Christmas favorite!

I write Regency historical romance because I fell in love with the era at the age of nine, and my love has only grown stronger since. I love the manners, the rules of proper conduct, the elegant clothes (especially men in breeches and boots,) travel in carriages and on horseback, the stately homes, and every aspect of life in this unique period.

Be that as it may, I have come to realize there are some aspects of Regency life, even in the most elite portions of society, that would not be amiss in the red plastic cup, mud-bogging, tobacco spitting locale in which I live today. Directions to my house do include the words “Turn off the paved road.”

Lest you think I use the term “redneck” as a pejorative, I spent a large portion of my childhood living in mobile homes in the South. My mother’s family were Native American sharecroppers. My father’s family were Pennsylvania coal miners. I know who and what I am. Jeff Foxworthy, the leading expert on the redneck lifestyle, defines it as “a glorious lack of sophistication.” For the purposes of this essay, and in my semi-expert opinion, that is the definition we will use.

There are examples of redneck behavior to be found in every race, religion, socio-economic group, and country in the world. I now realize the same is true of every historical era. Rednecks have been with us forever. Even during that most gracious and elegant of times—The Regency.

Prove it, you say? I give you a series of Regency Christmas traditions any self-respecting redneck would be happy to call his or her own. 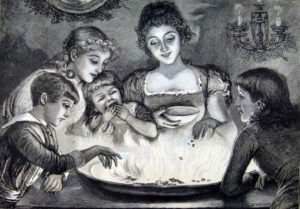 Under the heading of a Regency version of “Hey y’all, watch this!” comes the Christmas game of Snapdragon. Raisins and nuts were soaked in brandy in a large shallow bowl. The lights were put out, and the brandy lit. People had to try and grasp a raisin or nut and eat it without burning themselves. The winner was the person who managed to capture and eat the most. I think you’d have to soak me in brandy to get me to try it! 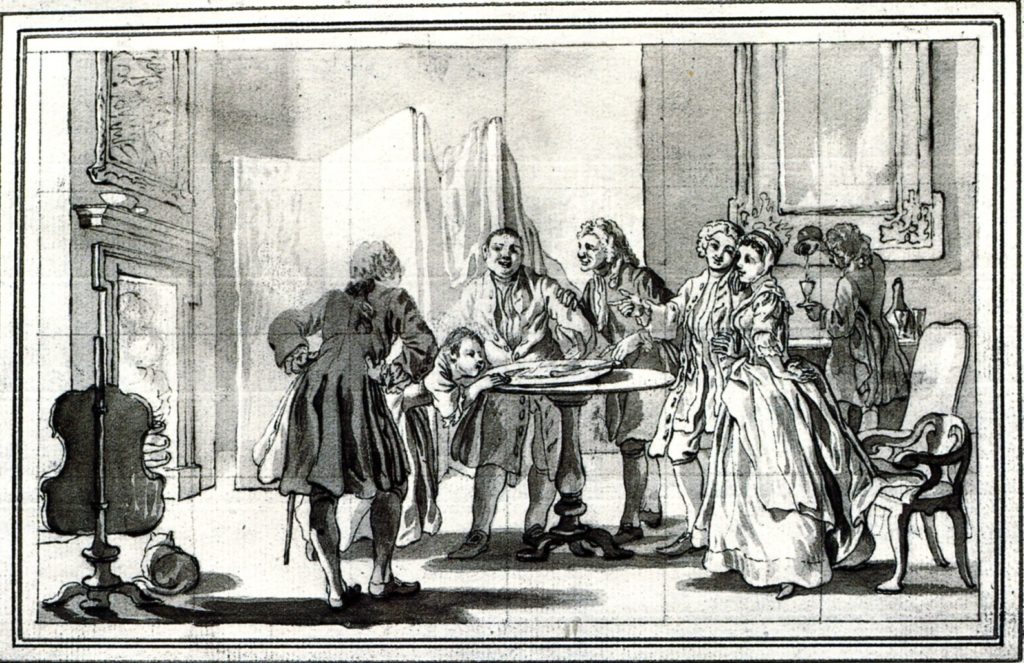 Another Regency era Christmas game with a redneck flair is bullet pudding. One must have a large pewter dish piled high with flour pushed to a peak at the top. A single bullet is placed at the crest of the “pudding.” Players take turns cutting a slice of the “pudding” with a knife. The person who is slicing the “pudding” when the bullet falls must then put their hands behind their back and poke about in the pile of flour with their nose and chin to find the bullet. Once they find it, they must retrieve it with their mouth. All the while trying desperately not to join their companions in laughter as this will result in flour being inhaled into the mouth and nose. Regardless, the bullet retriever ends up with flour all over his face. Any game played with live ammunition and the promise of someone ending up covered in a mess would be as welcome at a Redneck Christmas as it was at Regency Christmases.

There were no Christmas carolers in Regency England. However, wassail groups would go from house to house singing begging songs in the hope of receiving food, drink, and money. Wassail was a mixture of beer, wine, and brandy and was usually served to the singers at each house. Every house. A great many houses before the night was done. I think I’ve seen groups like this around my neighborhood at Christmas-time. 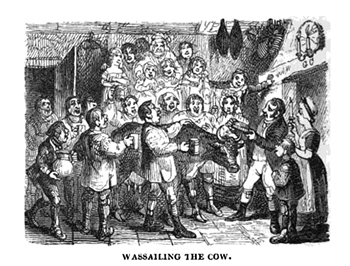 Very few houses had our idea of Christmas trees during the Regency. Such decorated Christmas trees were made popular in England by Queen Victoria and Prince Albert in the middle of the 19th century. However, trees were not left out of the Regency holidays. On Epiphany Eve, men would gather round a fruit tree, usually in an orchard, with cider and guns. In an ancient ceremony, they would drink to the tree and fire the guns to drive away evil spirits and promote the vigor of the trees. Horn-blowing was an alternative to firing guns. (Sounds like a Regency tail-gating party to me!) 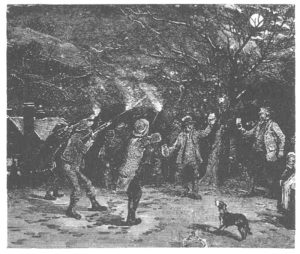 Speaking of trees, what could be more fun than a large group of men sent out into the woods to find the largest log possible to burn in the Christmas fireplace? The yule log had to be large enough to burn through the entire twelve days of Christmas. In fact, it had to be large enough to burn through to Twelfth Night and leave enough to be used to light next year’s log. Between the mine is bigger than your’s aspects of the hunt for the yule log and the opportunity to show off one’s strength in helping to drag the log home, this Regency Christmas tradition is rife with redneck possibilities. 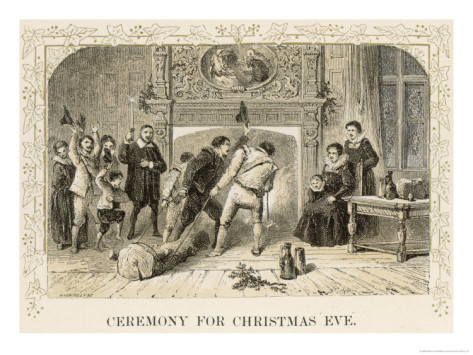 Round out your Regency Christmas outdoor adventures with shooting mistletoe out of the trees (a method used by many Regency bucks) and hanging it about the house in every doorway and dark corner, a Regency version of spin-the-bottle if ever I’ve heard one. 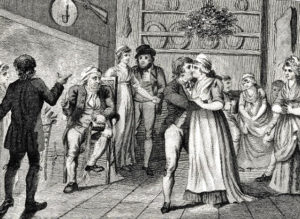 Oh, and don’t forget a Christmas dessert for which many families put the ingredients on layaway. K-Mart did not invent the concept. The original Christmas clubs were for families who could not afford to pay for the ingredients for their Christmas pudding all at once. Wives in less affluent households deposited their pennies with their local shopkeepers in order to have the money to purchase those luxury food items necessary for a proper Christmas pudding. And after all of that, said dessert was brought to the table amidst great pomp and ceremony and… set on fire. Anyone who doesn’t believe your average redneck would shout “Hell, yeah!” at the idea of a flaming Christmas dessert has never been to a Christmas barbecue in the South. 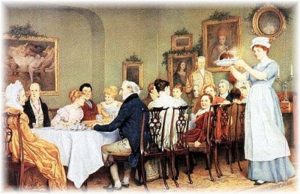 At the end of Christmas Day, men and women of every age, no matter how strict the rules of society, tend to celebrate this joyous holiday with a bit more exuberance than decorum prescribes. Even Regency ladies and gentlemen, at least during Christmastide, might show “a glorious lack of sophistication.” So should we all!