THE PROSPECT OF WHITBY 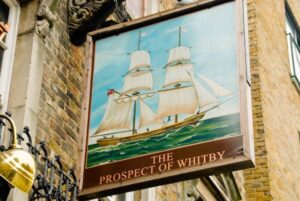 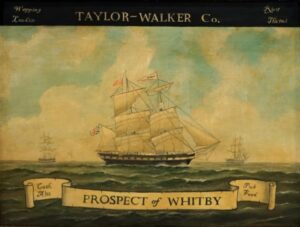 The Prospect of Whitby is one of London’s oldest pubs and it is believed to be the oldest riverside pub on the Thames. There has been a pub on this site since 1520 which means it existed during the reign of Henry VIII. In fact, the original flagstone floor is still visible in the pub today. Four hundred year old craftsmanship endures.

The first pub on the site was called the Pelican. Because of its proximity to the river it quickly became a den of cutthroats, pirates, thieves, highwaymen, and many other unsavory denizens of the area. Larger ships had to berth in the middle of the river and goods were ferried to shore in smaller boats by men called lightermen. This made it easy for criminals to steal from the ships, and The Pelican often served as a base for these felons to disperse their stolen goods. In spite of the name on the sign, because of the constant nefarious activity the tavern eventually became known as the Devil’s Tavern. Of course, with this sort of clientele the local prostitutes congregated here as well.

Naturally with the large criminal contingent in attendance, the tavern also claims its proximity to the execution dock used to hang those condemned to death by the Admiralty Courts. To this day there is a scaffold and hanging noose outside the tavern. Wapping Old Stairs next to the tavern was where some of those sentenced to death – usually pirates – were chained to posts to await the incoming tide and death by drowning. 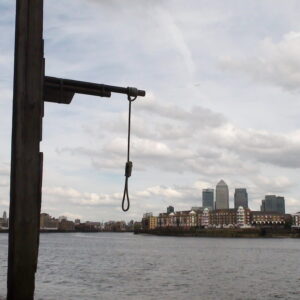 Like the Town of Ramsgate pub, the Prospect of Whitby was a favorite of the Hanging Judge George Jeffries (1645-1689) (see the Town of Ramsgate post.   http://numberonelondon.net/2021/05/historic-pub-crawl-town-of-ramsgate/) Once he began to frequent the establishment, the criminal element moved their activity elsewhere, or at least conducted their activities out of his sight. He had a special window built in the tavern that overlooked the execution dock so he could watch those whom he had condemned die. To this day people have reported seeing a man’s face gazing out the window where Jeffries used to sit. In an interesting side note, Jeffries supposedly had the bodies of those hanged dumped into the Thames. The body snatchers hid out in boats along the river’s edge to fish out the bodies and sell them to local medical schools. 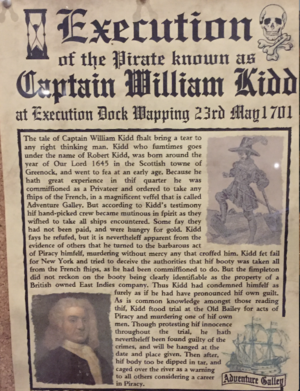 The most famous criminal hanged at the execution dock at the Prospect of Whitby was Captain William Kidd. Ironic, as the Scottish sea captain was originally appointed by the Crown to hunt down pirates. He discovered piracy was much more profitable than hunting down pirates. He did quite well for a while. Unfortunately, in 1698 he captured The Quedagh, which was sailing under a French pass. The captain, however, was an Englishman and the rich cargo Kidd took was property of the East India Company. Kidd was eventually captured and brought back to London where he was sentenced to death for piracy and for the murder of one of his own crewmen (in 1697) who had dared to cross him.

It took three tries to execute Captain Kidd. The first two ropes broke. The third one held and once he was dead his body was dipped in tar and hung by chains on the banks of the Thames as a warning to other pirates.

After a fire in the early nineteenth century the tavern was rebuilt and renamed. As the owners had tried everything to disassociate their tavern from its dangerous reputation, for a while they had removed all signage. Those who wished to direct someone to the tavern would say “You want the tavern across from the Prospect of Whitby. The Prospect of Whitby was a collier that berthed next to the tavern. The ship hauled coal from Newcastle on Tyne to London. Eventually the directions were shortened to the Prospect of Whitby and the owners of the newly rebuilt establishment decided to adopt the name permanently. Much more amiable a name than The Devil’s Tavern. Even with the new name a few of the tavern’s more lucrative activities continued. The cock fighting pit and the bare knuckle boxing arena were in use well into the nineteenth century. 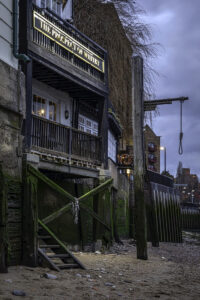 Of course the pub claims its more upstanding celebrity visitors as well. The diarist Samuel Pepys (1633-1703) was said to have had supper at the tavern quite frequently. Charles Dickens (1812-1870) was known to visit as well. The artists J.M.W. Turner (1775-1851) and James Abbott MacNeill Whistler (1834-1903) both visited and made sketches of views from the pub.

Is the pub haunted, you ask?

According to customers from the eighteenth century forward, the Prospect of Whitby is the grand central station of riverside hauntings. To name just a few:

Supposedly one is often accosted walking to the pub at night by the waterlogged ghosts of the men hanged or drowned at the execution dock in search of their bodies taken by the body snatchers. Other similar ghosts are said to be in search of Judge George Jeffries to exact revenge.

The ghost of a young woman dressed in a doublet, breeches, and smoking a pipe is often seen sitting in the dark corners of the pub watching guests drink. Supposedly, she was a moll cutpurse – a woman who would sidle up to unsuspecting (translation:drunk and in search of feminine company) men and cut their purses from their belts. She is believed to have been caught by one of her marks before she could get away and the gentleman beat her to death in the back of the tavern. One wonders if she is visiting the pub these days in search of her next mark.

Oh, and remember that fire in the early nineteenth century? The cobblestone streets around the tavern all but guarantee it is shrouded in fog at night. The cobblestones retain heat and the cold night air pulls that heat out as fog. The fog was even thicker in the nineteenth century when horse and foot traffic kept the roads heated at all times. As a result it was not unusual to see shapes, but nothing clearly, if one happened to stroll by the tavern after closing time. However, people began to say they saw lights in the Prospect of Whitby long after the owners had closed up and gone to bed. Not just lights, but lights enough to see clear through the pub to the river. And in those lights they saw a figure moving about the tavern. A figure very like that of Captain William Kidd. Eventually the owners decided they did not want people coming to the pub after closing in an attempt to see the mysterious figure. So one night they decided to leave the lights on in the tavern. Big mistake. That very night a fire broke out in the back of the tavern and burned nearly to the execution dock. If not for the newly inaugurated fire brigade the fire might have spread throughout the dockside buildings. Needless to say once the tavern was restored the lights were left out after closing. Just in case. A vengeful Captain Kidd is not to be trifled with.

These days there is no need to imagine what the pub might have looked like when pirates, cutthroats, and thieves occupied the tables there. From the rickety stairs to the stone-flagged floors to the crooked doors and heavy rum flagons the Prospect of Whitby looks very much as it did then. For a trip back in time to the swashbuckling days of yore, this pub is definitely worth a visit. Just pay attention to sudden chills and the hairs on the back of your neck! 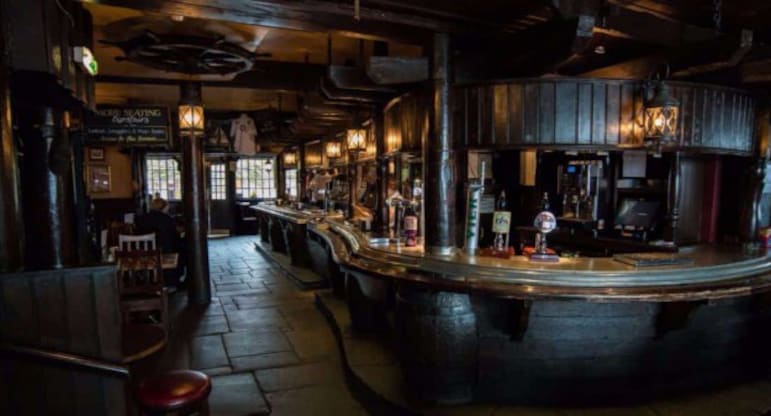 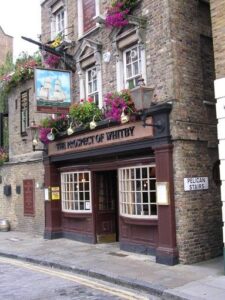