Sometimes, the most interesting bits of history are right in front of us, but remain hidden from view because we’re just too busy to take proper notice of them. Below, we point out a few of the hidden historical gems to be found in Southwark. 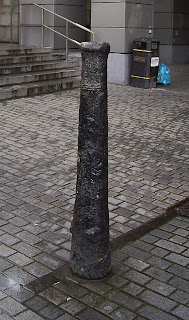 Originally, street bollards were adapted from the French cannons captured at the battle of Trafalgar in 1805. They were placed on street corners to stop the iron wagon wheels of carts from mounting the kerbs and doing damage and became so useful that bollards were installed throughout the City. Once the stock of authentic French cannons had been exhausted,  copies were made and can still be seen on the streets of London today. The bollard pictured at left is an original French cannon which stands on the Southbank near to Shakespeare’s Globe. For more information and photos, visit Bollards of London. 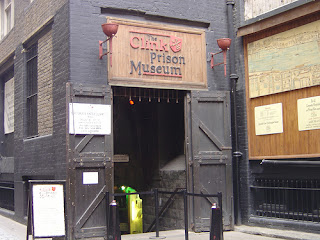 Hardly a secret since it’s now a cheesey tourist attraction, the Clink Prison (1 Clink Street, Bankside) is still of note. The Clink Prison Museum is built upon the original site of the Clink Prison, which dates back to 1144 making it one of England’s oldest, if not the oldest Prison.
Owned by the Bishop of Winchester, the Clink Prison was used to control the Southbank of London known as “The Liberty of The Clink.” This area housed much of London’s entertainment establishments including four theatres, bull-baiting, bear-baiting, inns and many other darker entertainments, including prostitution, smuggling and murder – a fact that meant that the Clink was never short of inmates. In fact, it’s still housing prisoners – in August 2006 an employee accidentally locked two tourists in the basement museum when locking up for the night and going home. They were released later that night after pressing the fire alarm. And they thought “You’ll be thrown in the Clink” was just an old saying. 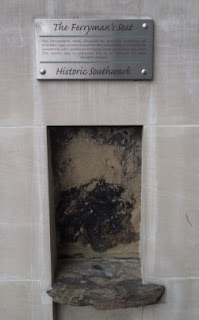 The Ferryman’s Seat, Bear Gardens, Bankside is close by where Shakespeare’s Globe now stands. Long ago when London’s only river crossing was the London bridge, ferrymen waited to take people from one side of the shore to the other. On the South Bank stood many “Stews” the old name for brothels that were lined along this side of the river on the South Bank, as well as actors and troubadours who preformed at the Rose and the Globe theatres and the large crowds who came for the nearby bear baiting ring. Now set into the side of a modern building, the ferryman’s seat stands in exactly the same spot where the ferrymen rested between fares. 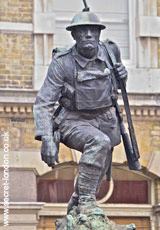 The Southwark War Memorial in Borough High Street was sculpted by Philip Lindsey Clark (1889-1977), a Captain during WWI who won the DSO before going back to study at the Royal Academy. This work of 1924 shows a soldier tramping through mud, while reliefs on each side show a biplane dogfight and a naval battle. A weeping wife and mother decorate the reverse. 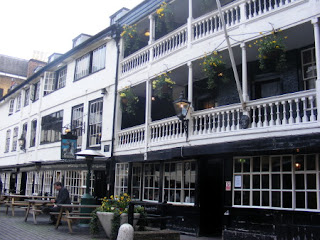 Again not exactly a secret, since it’s still a popular pub and meeting place, The George Inn on Borough High Street is the last of London’s galleried coaching inns. For centuries, Borough High Street was the terminus for coaches travelling to London from the south when the old London Bridge was too narrow for them to cross into the City. Passengers used to eat and sleep here while they waited to board the horse-drawn coaches which handled long distance travel in the days before the railways. Rooms occupied the galleries that encircled the courtyard where the coaches stopped while the horses were changed and the passengers got on and off. The George dates from 1676, when it replaced an earlier inn destroyed by fire. While the northern and central wings were demolished for the railway in 1889, the southern wing remains intact. In 1937, it was taken over by the National Trust, which oversaw its repair and restoration. 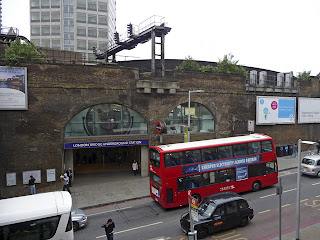 London Bridge Station has the honour of being the oldest railway station in London. It opened on 14 December 1836 as the terminus of the London and Greenwich Railway, the first steam-powered railway in London and the first in the world designed specifically to carry passengers. It ran along a viaduct consisting of 878 arches originally intended to be rented out for housing. Since 1839, when the London and Croydon Railway began operation, the station has consisted of two parts, each of which has been altered and expanded many times. Having suffered bomb damage during the Second World War, the station was rebuilt and reopened in 1978. 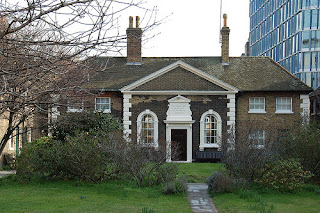 Brooke and I actually came across Hopton’s Almshouses in June, when the gardens were alive with gorgeous roses. The Almshouses were founded by fishmonger Charles Hopton, who died in 1730. The 26 almshouses for ‘poor decayed men’ of the parish were erected in 1746-9 and opened in 1752. The residents, who included gardeners, watermen and fishermen were also granted £6 per year and 32 bushels of coal. In 1825 two extra houses were added. The complex includes two garden squares with centre lawns and roses, edged with shrubs. Outside the gates is a drinking fountain and cattle trough. The almshouses were rebuilt and modernised in 1988 and are used for housing, administered by The Anchor Trust.