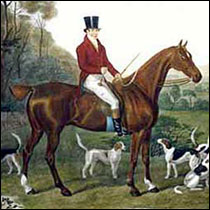 John `Mad Jack’ Mytton was born in 1796, the son of a Shropshire squire. Though he had a rather typical upbringing, John Mytton seems to have gone out of his way in order to earn the name “Mad Jack.” He drank several bottle of port each morning to “forestall the bad effect of the night air” and was also known to drink eau de cologne when nothing else was to hand. He drove his four horse gig recklessly, often stripped bare whilst fox hunting and arrived at one dinner party on a bear and dressed as a highwayman to hold up his guests as they left his house on their ways home. He is reputed to have kept 2,000 dogs and more than 60 finely-costumed cats, but Jack’s specialty seems to have been horses – A favourite horse ‘Baronet’ had full and free range inside Halston Hall, and would lie in front of the fire with Jack. And, he is said to have ridden his horse into the Bedford Hotel, up the grand staircase and onto the balcony, from which he jumped, still seated on his horse, over the diners in the restaurant below, and out through the window onto the Parade. 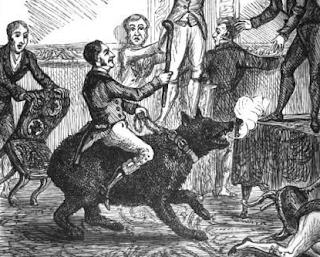 Once, he set fire to himself once in order to cure his hiccups. He survived, inherited Hallston Hall estate and a fortune worth about £500,000 a year by today’s standards, but ended his life at the age of thirty-seven in the King’s Bench debtor’s prison in Southwark. 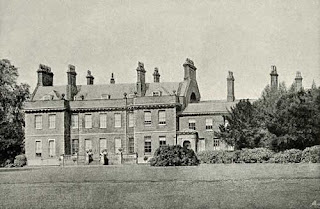 John ‘Mad Jack’ Mytton ‘invested’ £10,000 to become MP for Shrewsbury, handing out ten pound notes in order to buy votes, but spent less that half an hour in the House of Commons. Madcap pranks made Mytton a legend in his own lifetime. A drunken friend was put to bed with two bulldogs and a bear. Mytton went duck shooting by moonlight on Halston’s frozen lake, dressed in only his nightshirt. Disguised as a highwayman, complete with his blazing pistols, he ambushed departing guests on the Oswestry road. One biographer relates further details regarding the bear incident, adding that Mytton  rode the bear into his drawing room in full hunting costume. “The bear carried him very quietly for a time; but on being pricked by the spur he bit his rider through the calf of his leg.” ‘Mad Jack’ lost his money, but not his friends. Three thousand people attended his funeral. He is buried in the Chapel at Halston.”

Buried at Halston he may be, but the Mytton & Mermaid Hotel at Atcham is not only named for Mad Jack, but claims to be home to his ghost, which is reputed to appear each year on September 30, Mad Jack’s birthday. His funeral procession stopped at the Mytton, then a coaching inn, on the way to Halston Chapel. Fittingly, the Jack Mytton Way was opened in 1993 and covers 100 miles of spectacular Shropshire countryside. It is one of the longest bridleways in the country and is used by horse riders, cyclists and walkers, none of whom, we presume, have a penchant for leaping from balconies.