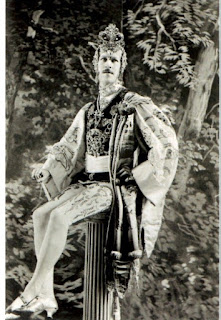 Called The Mad Marquess or, less frequently, the Dancing Marquess, Henry Cyril Paget, 5th Marquess of Angelsey, could not have been more different from his illustrious ancestor, Henry William Paget, the 1st Marquess, if he’d tried. Whilst the 1st Marquess lost his leg at Waterloo, the 5th lost a fortune on a lavish, over-the-top lifestyle that nearly bankrupted the estate. The 5th Marquess collected clothing and jewels with gusto and had his motor car fitted with pipes that issued wafts of perfume instead of exhaust fumes. The 5th Marquess’s excesses scandalized the locals who lived near Plas Newydd, the Angelsey home of the Paget family, as they did the entire nation, but the final straw came when he had the family chapel converted into his own private theatre.

The Marquess was described by Clough Williams-Ellis as “a sort of apparition – a tall, elegant and bejeweled creature, with wavering elegant gestures, reminding one rather of an Aubrey Beardsley illustration come to life.” An Omaha newspaper described him thus: “He is a thoroughly effeminate looking young fellow and he may be seen when in Paris walking around with a toy terrier under his arm, the pet being heavily scented and bedizened with bangles and bows. The fingers of the marquis fairly blaze with rings. He presents the characteristics of the Gypsy type.” 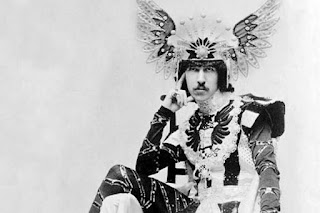 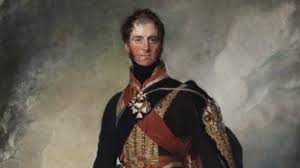 As I said, the 1st and 5th Marquess’s couldn’t be more different, although they do appear to share the same smile. Viv Gardner, Professor of Theatre Studies at the University of Manchester, is recognized as an expert on the life and times of the 5th Marquess and so we turn to her article on the subject that appeared in The Guardian in  2007 for more background information:

“The recorded facts about Paget are fragmentary and elusive; the suppositions are numberless. What we do know is that Henry Cyril Paget was born in Paris on June 16 1875 to Henry Paget, Earl of Uxbridge, later 4th Marquis of Anglesey, and his wife, Blanche Mary Curwen Boyd. They had married in 1874, and Paget’s mother died when he was scarcely two years old. On her death, he went to live with the French actor Benoît-Constant Coquelin – who was rumoured to be his real father. Paget referred to Coquelin’s sister as his aunt throughout his life, and she was with him when he died.
At the age of eight, Paget left Paris and was taken to live at Plas Newydd, his father having married for a third time, to an American heiress. His childhood in north Wales seems to have been particularly isolated.
Paget missed his own lavish, week-long 21st birthday celebrations due to ill health, and a cold could put him to bed for weeks. He learned painting and singing in Germany and spoke fluent French, good Russian and grammatical Welsh. At some time, rather incredibly, he also served as a lieutenant in the 2nd Volunteer Battalion of the Royal Welsh Fusiliers.
In 1898, Paget married his cousin, Lilian Chetwynd. The marriage was annulled two years later – stories abound as to why – but the annulment was changed to a legal separation in 1901. He succeeded to the title of 5th Marquis in 1898, and inherited substantial property on Anglesey and in Staffordshire, with an annual income of over £110,000 a year (roughly £8m in today’s money).
By 1904, however, the Marquis had bankrupted the estate, spending thousands of pounds on jewels, furs, cars, boats, perfumes and potions, toys, medicines, dogs, horses and theatricals on a scale unimagined even among the profligate Edwardian aristocracy. Everything was sold to meet his debts, down to the contents of the potting shed and a parrot in a brass cage.
Paget “retired” to France on an income of £3,000 a year, accompanied only by a manservant, his adopted child (a dark-skinned baby who was later returned to her birth parents) and her nurse. They went first to Dinan in Brittany, and finally to Monte Carlo, where Paget died in 1905, his former wife and Mme Coquelin at his bedside.
Most of the Marquis’s effects were sold from his family estates soon after he was declared bankrupt, and all his personal papers were destroyed by the Paget family after his death. Even today, the family are reticent about their forebear, who brought devastation and distress not just to the Pagets and their property, but to their servants, tenants, neighbours and tradesmen.” 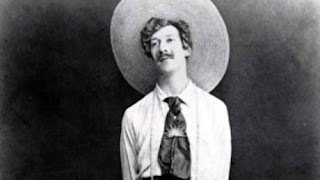 More information on the 5th Marquess can be found at the irreverant and most amsuing site, Bizarre Victoria and in this article written by a National Trust intern, intriguingly titled The Emerald Encrusted Wiff-Waff Jacket. Finally, you can listen to a half hour radio programmed on the 5th Marquess and all his eccentricities here at the BBC Radio 4 site.