Osterley Park was once a rural retreat but today it is in Greater London, reachable by  the tube (look for the Osterley stop on the Piccadilly line).  The original Tudor mansion was built in 1575 by Sir Thomas Gresham, banker and founder of the Royal Exchange.  The old house was built of red brick around a square courtyard.  After considerable alterations in the 17th century, it was acquired by Francis Child, the immensely wealthy London banker, in 1713. His grandson Francis hired Robert Adam to transform the house in 1761 but he died before the house was finished, leaving the house to his brother Robert Child. 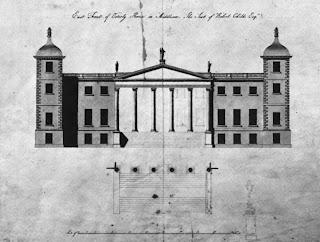 Adam’s work was completed in 1780. The center of the west section of the building was removed by Adam and replaced with a giant white Ionic portico. 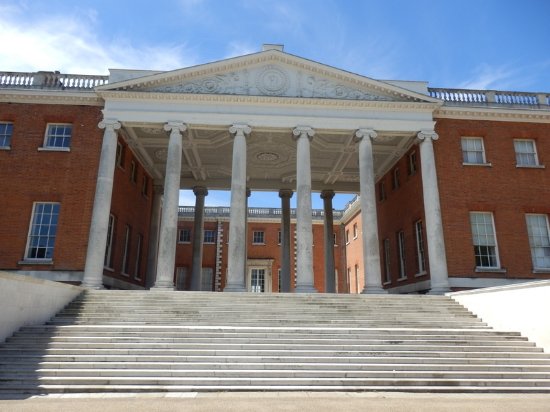 The elegant portico opens up the courtyard.

The 5th Earl of Jersey (1773-1859) became the owner of Osterley Park by way of his marriage to Robert Child’s granddaughter, Sarah Sophia Fane, the Lady Jersey who was a patroness of Almack’s. The story of the young heiress is well known, the second elopement of a Child female.

Robert Child’s daughter (Sarah Anne Child) had eloped with John Fane, later 10th Earl of Westmorland, in 1782. Robert Child (1739-82), proud of being a prince of the merchant class and not an aristocrat, did not want his property and fortune to go to the Westmorland family. He wrote a will which left his money and property to the second child of his daughter. Sarah Sophia Fane inherited everything at age eight. In 1804, she married George Villiers, who changed his name (a necessity under Child’s will) to Child-Villiers and in time became the 5th Earl of Jersey. He was the son of that Countess of Jersey who was a mistress of the Prince Regent. 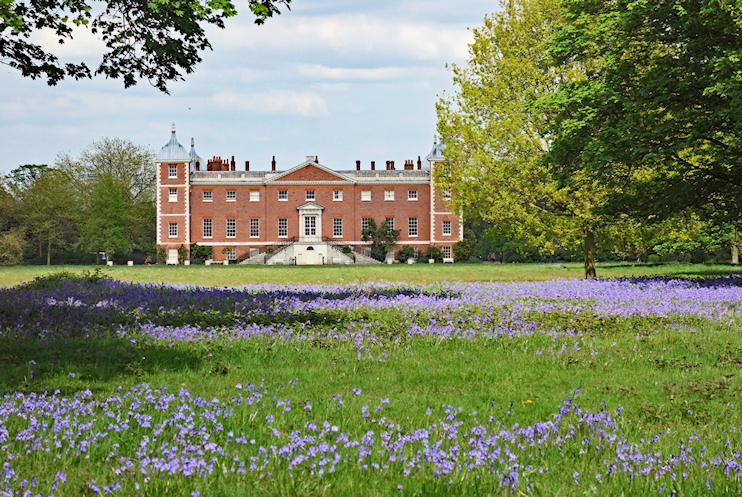 The Osterley house was rarely used by the Jerseys, who had a country estate, Middleton, in Oxfordshire in addition to a large townhouse in Berkeley Square. For decades Osterley was maintained but empty of life. The Jerseys entertained there only occassionally. Eventually it was let to Sarah’s cousin, Grace Caroline, dowager Duchess of Cleveland, a daughter of the 9th Earl of Westmorland. When she died, the 7th Earl of Jersey and his wife Margaret (1849-1945) lived and entertained there. The Lesson of the Master, a novella by Henry James, is set at Osterley. 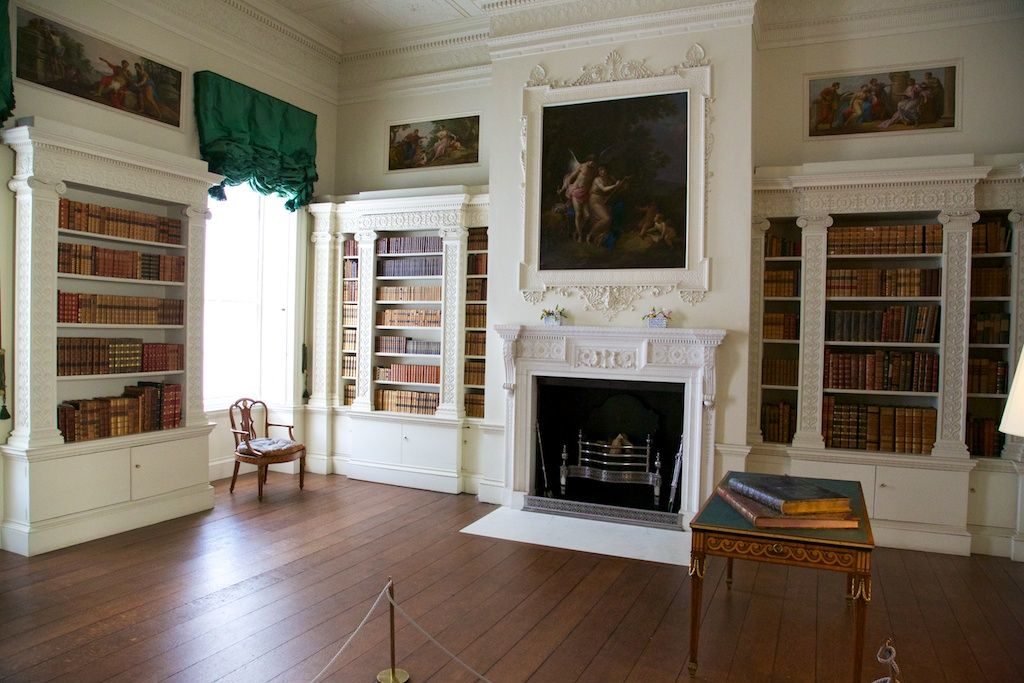 In 1885, the famous library was sold for thirteen thousand pounds. After the 7th earl died in 1915, the tenancy of the house foundered again. For many years, it was rarely used until the 9th Earl opened it to the public on weekends. He gave it to the National Trust in 1949 and considerable restoration has taken place. It was recently used for some scenes in the film Gulliver’s Travels and has been in numerous other movies and television productions.

The rooms are arranged in a horseshoe, with the entrance hall at the top. After walking through the exterior portico, one crosses the courtyard and enters the magnificent hall, designed by Adam in 1767. The color scheme is neutral, greys and whites with stucco panels of ancient military scenes on the walls. The floor has a black pattern on white marble, a reflection of the plasterwork ceiling design. 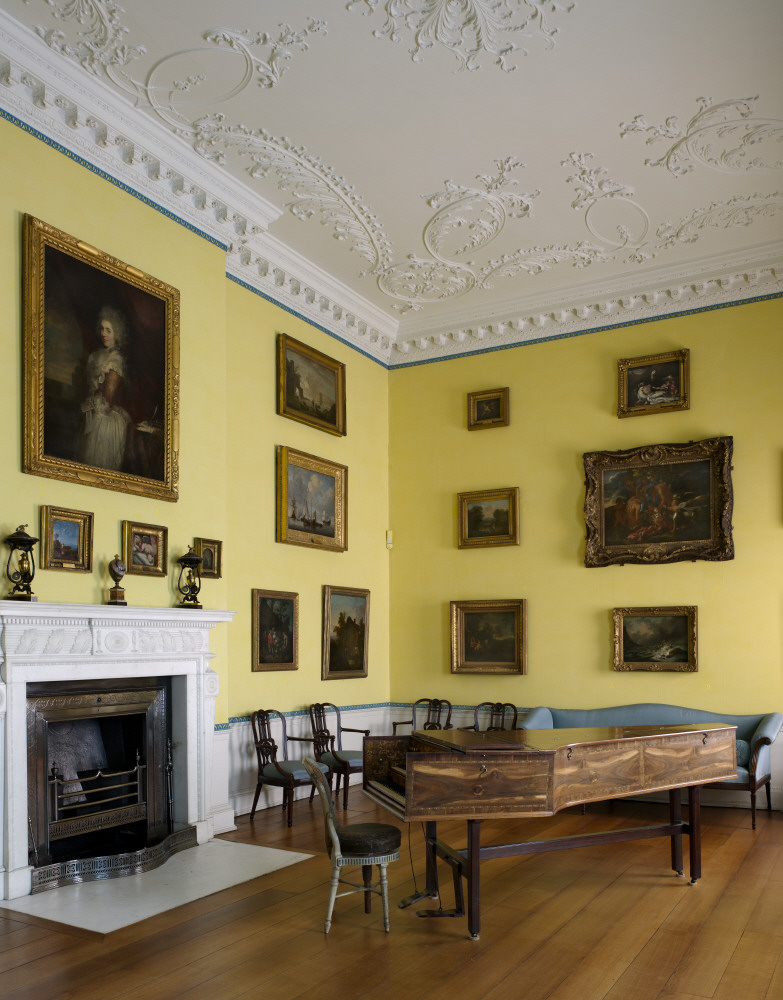 The Breakfast Room at Osterley Park, Middlesex. The harpsichord was made for Sarah Anne Child in 1781 by Jacob Kirckman and his nephew Abraham. The lyre-back chairs are attributed to John Linnell.

The Breakfast Room has a lovely view of the park and was used as a sitting room, graced by Adam’s arched pier glasses. This room was redone in the 19th century, but the colors and some furniture is to Adam’s design. The drawing for this design is in Sir John Soane’s museum, London, as are many Adam designs. It is dated 24 April 1777. The room also contains a harpsichord of 1781, made by Jacob Kirckman and his nephew Abraham, who were well known for their instruments. It belonged to Sarah Sophia’s mother, the countess of Westmorland. After her death in 1793, her husband asked to have it sent to him as a memento of his wife; it was returned to Osterley in 1805. 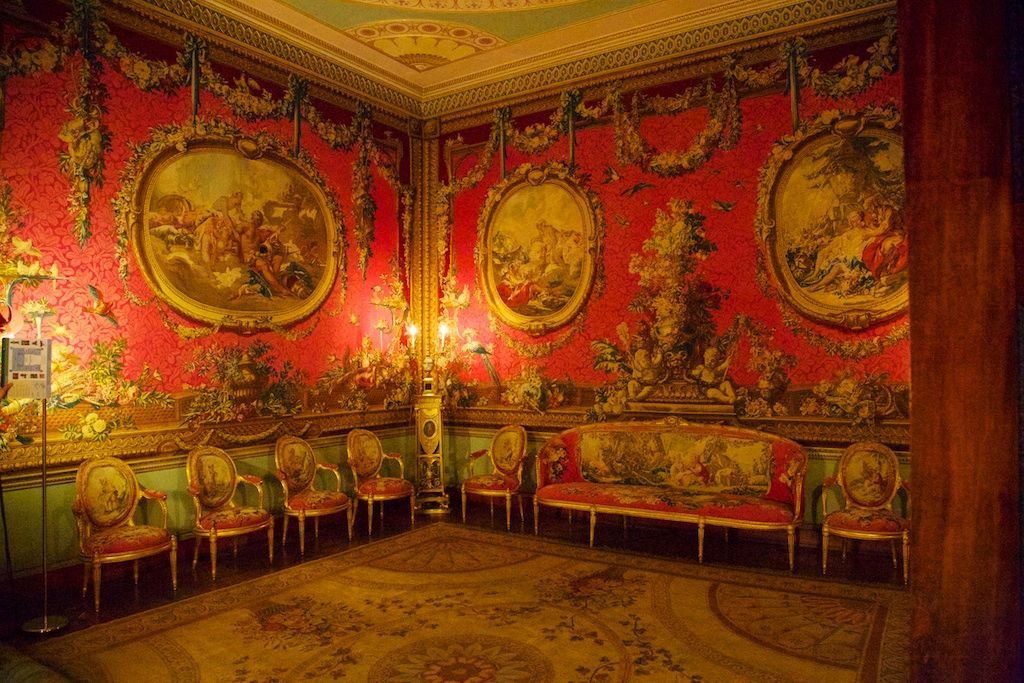 The Tapestry Room was designed to hold a set of magnificent Gobelins tapestries designed by Francois Boucher depicting the Loves of the Gods. Several Adam rooms for other clients were decorated similarly, with the tapestries ordered from the Gobelins factory in Paris, which was run in the 1770’s by a Scot. The sofa and eight matching armchairs were specially created and upholstered to match the tapestries. 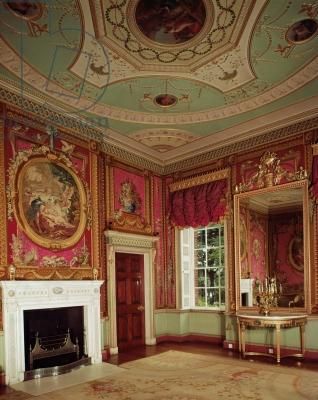 The magnificent ceiling is another Adam masterpiece. The central medallion shows Minerva accepting the dedication of a child. The four smaller medallions show female representations of the liberal arts. As was the usual practice, these paintings were done on paper, affixed to canvas backing and placed in stucco frames after the ceiling was painted. 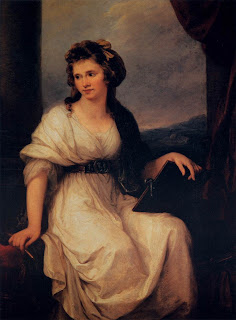 A self portrait by Angelica Kauffman. She did many paintings for Adam, often in her well-known allegorical style. In an era when most of the artists were men, Kauffman (1741-1807) excelled at portraiture and even huge historical and allegorical paintings. Born in Switzerland, she found great success in England. In 1781, she married her colleague Antonio Zucchi (1726-95) and the couple went to live in Rome. Adam had met Zucchi in Rome and persuaded him to come to England in 1766. Zucchi also executed many paintings for Adam rooms, often in ceiling medallions or above doors and fireplaces. 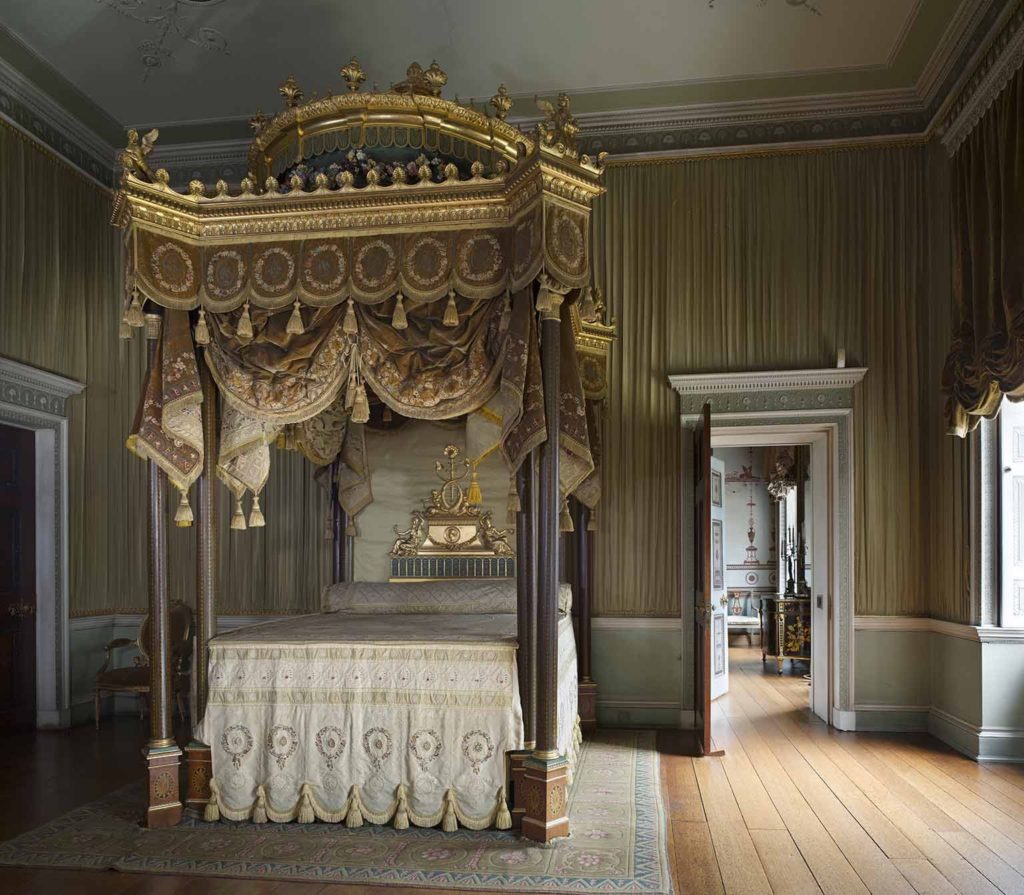 In the State Bedchamber stands a huge bed, made to the Adam’s design in 1776. The drawing is also in the Soane museum. Not only did Adam design the bed, he designed the hangings and embroidered silk counterpane and the interior of the dome. Included in the design are many allegorical symbols, including marigolds, the emblem of Child’s Bank. In this room is another of the exquisite ceilings by Kauffman. 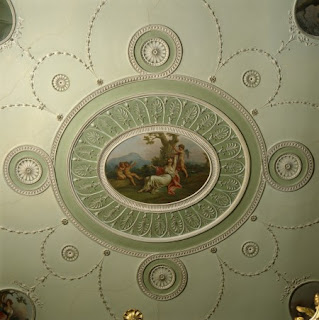 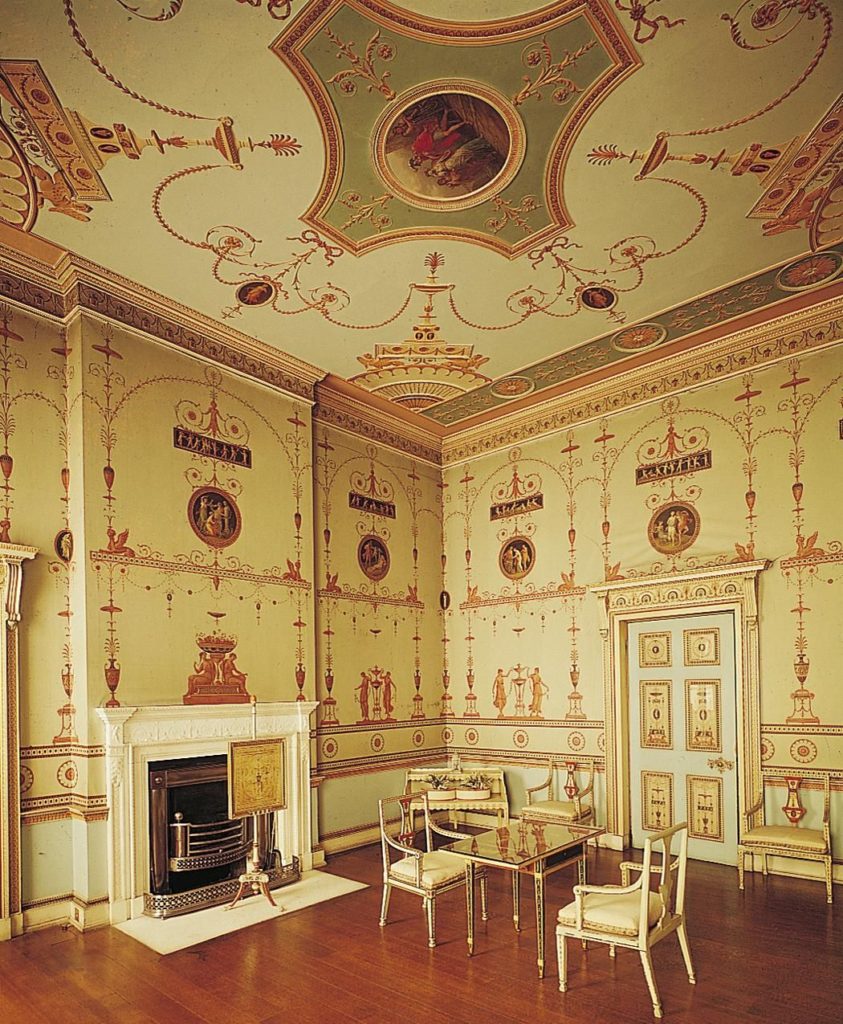 The Etruscan Room Dressing Room shows Adam utilizing ancient designs discovered in Italy. At that time, the term Etruscan referred to the types of designs found on Greek vases. Horace Walpole in 1778 said the room was “painted all over like Wedgwood’s ware, with black and yellow small grotesques.” The furniture is attributed to Chippendale. 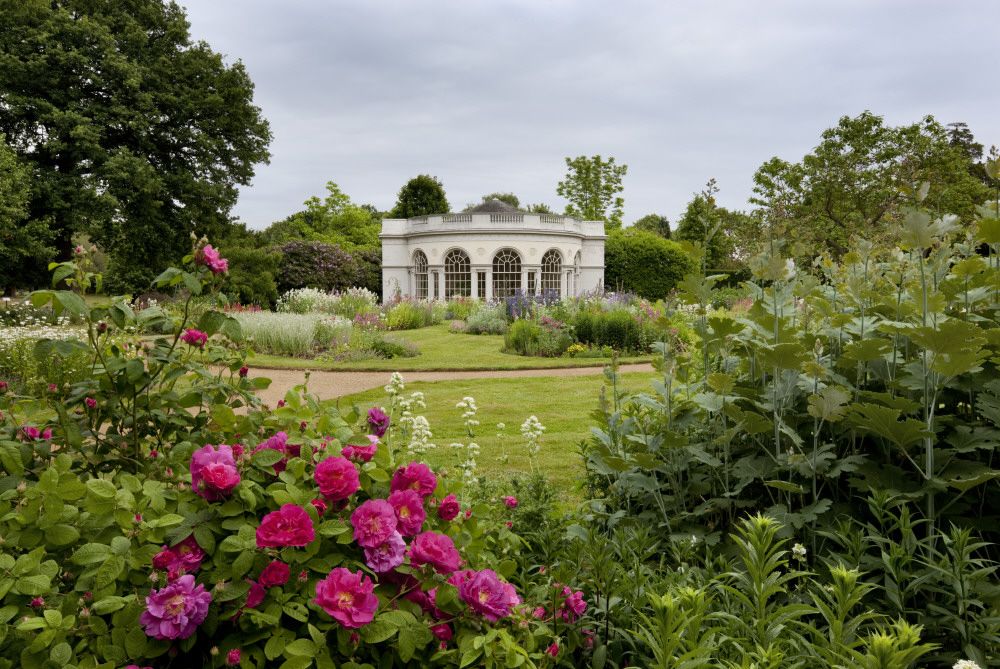 The Childs had spent a great deal of time developing the gardens and the park with lakes, wildernesses and open space.  Fortunately, these  also survive and have been restored. Under the supervision of the National Trust, the park is open to the public and is well used by hikers, strollers, bicyclists and bird watchers.
A visit to Osterley Park is on the itinerary of Number One London’s Town and Country House Tour in September. Itinerary and full details can be found at the link.