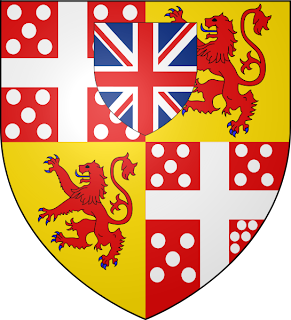 An image of the arms of the Dukes of Wellington, shamelessly stolen from author Lesley-Anne McLeod‘s blog.
Thanks, Lesley-Anne!

On 14 September 1852 Field Marshal Arthur Wellesley, 1st Duke of Wellington, KG, KP, GCB, GCH, PC, FRS died both quite suddenly and peacefully at his rooms at Walmer Castle, Kent. It is hardly necessary for me to take up further room on this blog in extolling the myriad virtues, accomplishments and glories attached to the first Duke. There are a wealth of stories about his funeral, the largest ever held in London until that held for Princess Diana, in books, on the web, etc. Rather, I thought it might be interesting instead to turn our attention on this day to the man who became the second Duke upon his father’s death.

Lt.-General Arthur Richard Wellesley, 2nd Duke of Wellington KG PC (3 February 1807 – 13 August 1884), was the eldest son of the 1st Duke of Wellington and Kitty Pakenham. In 1853 he was made a Privy Councillor and a Knight of the Garter in 1858 and in 1863 he inherited the Irish title of Earl of Mornington from his cousin. In 1839 he had married Lady Elizabeth Hay, but they had no children, so at his death he was succeeded in his titles by his nephew, Henry.

Arthur was 45 years of age when his father died and while the Duke had been proud of both Arthur and his younger son, Charles, they never enjoyed what might be remotely called a warm family bond. The 2nd Duke was known to have said that his father often treated himself and his younger brother as “duffers.” There are many anecdotes that back up this fact, but I’ll use the following as being illustrative of the coolness between father and son(s).  When the 2nd Duke was still Lord Douro, he was in the Rifle Brigade and stationed at Dover, in which neighborhood his father also resided, at Walmer Castle, as Lord of the Cinque Ports. It was the Duke’s habit to invite all the officers quartered in the town to dinner at the Castle. On one particular occassion, the Duke invited every officer on the spot, with the exception of his son, prompting him to send his father the following note: “The Marquis of Douro presents his compliments to F.M. the Duke of Wellington, K.G., and would be glad to know why, alone among the officers of his regiment, he has not been invited to dinner at Walmer Castle.” The Duke replied by return of post: “F.M. the Duke of Wellington, K.G., presents his compliments to the Marquis of Douro, and begs to inform him that the reason why he was never invited to dine at Walmer Castle is that he never called there.” 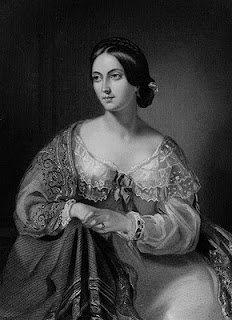 Elizabeth, 2nd Duchess of Wellington (1820-1904) was born Lady Elizabeth Hay, a daughter of the eighth  Marquess of Tweeddale. One of her brothers was the ornithologist Viscount Walden, and another the Admiral of the Fleet Lord John Hay. She married Lord Douro in 1839 and was appointed Mistress of the Robes to Queen Victoria in 1861 by the Liberal Prime Minister Lord Palmerston, and continued in that rôle until 1868, serving through the governments of Lord Russell, Lord Derby and Benjamin Disraeli. She was again Mistress of the Robes in Disraeli’s second government, 1874 to 1880. Her husband died on 13 August 1884, and the Dowager Duchess survived him for exactly twenty years to the day, dying at Bearhill Park, Walton-on-Thames on 13 August 1904.

The second Duke of Wellington used to say to his old schoolfellow, the publisher Mr. John Murray : “I cannot write my father’s life, but I can at least see that the material is there for a biographer some day.” Accordingly, with praiseworthy diligence, he set to work and edited fourteen volumes of supplementary military despatches, and eight volumes of civil correspondence, bringing it down to the year 1832. Here, then, are thirty-four volumes, each containing, on an average, about six hundred and fifty closely printed pages—truly he were a bold man who should claim to have extracted all that is of moment from such a vast storehouse.

ln October 1882 the Duke was having trouble with his eyesight and wrote: “l avail myself of another hand kindly placed at my disposal, as l am not yet permitted to read or write. l dare say,  you will remember my sight was very indifferent when you were at Stratfield Saye. lt went on from bad to worse, until at last it became absolutely necessary that l should undergo an operation which I did a few days ago with perfect success.” The operation involved the removal of one eye, but the Duke retained his sense of humour throughout. Afterwards, the surgeon who performed the operation mentioned to the Duke that the eye would be preserved and kept for study. The Duke suggested that this might present a good opportunity for the doctor to make some extra money – by betting people that they couldn’t guess the distance between the Duke of Wellington’s eyes.

After Wellington’s death, the 2nd Duke of Wellington allowed the public to visit the principle apartments of Apsely House from 1853 onwards on written application. He made some alterations but the main rooms remained substantially intact until the 7th Duke of Wellington presented the house to the nation in 1947.

The 2nd Duke of Wellington uttered what are amongst the most poignant words in history when, upon realizing that he would soon be succeeding his illustrious father to the title, he was said to have remarked, “Imagine what it will be when the Duke of Wellington is announced, and only I walk in the room.”

1 thought on “The Death of Wellington – Long Live the Duke”