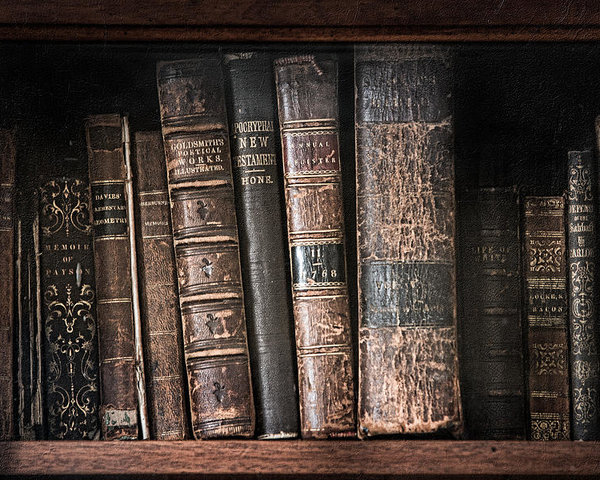 I currently own slightly over 500 research books about the Regency era. They are catalogued online at LibraryThing  which is one of the earliest online cataloguing services. I understand there are far more platforms now, but this one has served me well and the community is without peer when it comes to discussing and admiring the libraries of its members. My library is listed as public, which means it can be viewed by any member of LibraryThing. Here’s the link to my Regency Research Book collection, which comprises 1/6th of the books I have catalogued so far. I won’t tell you how many of my books are not catalogued. The number frightens even me.

As dearly as I love my Regency research books, those books written and published during or just after the Regency era are my most prized. Why? It isn’t the monetary value nor the cache of having antique books to display on my shelves. I live in the middle of nowhere and my library is hardly ever seen by anyone else. My old books have incalculable value to me for two reasons.

Their proximity to the era about which or during which they are written puts my research as close to the source as I can reach. Ask anyone who is a fanatic about a certain period and place in history and they will tell you, whether it be visiting an exhibit of clothing sewn and worn during said era or reading a copy of a book written and printed during that era, extant resources are the best. To be able to actually look at an item, be it a Manton pistol or a single-lens quizzing glass or a lady’s corset, transports a person into a place as near to the era as they will ever be absent a teleporting police box, a ring of Scottish stones, or an acquaintance with a couple of gentlemen named Bill and Ted. Books written about an era during that era or shortly afterwards offer the very best view into not only the subject matter, but also into the mind of the writer. An invaluable view to have.

Paterson’s Roads was one of the essential travel atlases of the Regency era. Those huge, unwieldy spiral bound atlases one can purchase at rest stops, restaurants, and in no less a location that Walmart have nowhere near the elegance of this volume, but they serve the same purpose. With Paterson’s Roads in hand a Regency gentleman, an ambitious coachman, or a young lady looking to escape an unwanted marriage might find his or her way nearly anywhere the road might take them. My copy has a bit of scuffing about the cover, but it does include all eight foldout maps intact, a rarity. It also has the added thrill, mixed with a bit of sadness, of coming from the library of a country house. The new owners of Lowick Hall in Cumbria have parted with large portions of the home’s library in order to afford renovations necessary to maintain the house. Their loss is my gain, but I cannot help but wonder at whose hands have touched this book before me and what adventures it took them on before it made its way across the Pond to me.

I own two editions of The Stately Homes of England, Illustrated with 210 Engravings on Wood by Llewellyn Jewitt. One is the 1877  two-volume first edition published in England and the other is volume one of the 1878 edition published in the United States. The British edition was an intentional purchase from a book dealer in Saxmundham, England. The American edition I came upon at a flea market and I simply could not leave it there to languish unappreciated. This book allows me to see these stately homes, many of them gone now, through the eyes of both a writer and an engraver who lived only slightly removed from the Regency era. One cannot put a price on their vision. And the wood engravings are exquisite.

My 1890 edition of Glimpses of Old English Homes, Illustrated with drawings and portraits by Elizabeth Balch is a bit worse for wear. As with all of my old books it is carefully wrapped and preserved and I wear gloves when I consult it. She is a fragile old girl, but the information and illustrations and the scholarly research conducted by the author provide myriad little details a researcher more removed from the era might never have the opportunity to see.

In addition to these three beauties, I own a few more ancient books, as my nephew would call them. I have an 1860 edition of William Makepeace Thackery’s The Four Georges – Sketches of Manners, Morals, Court and Town Life. This book is both entertaining and informative and tells me in no uncertain terms what the author thought of the Georgian era and the people who made the era what it was.

I also have an 1821 edition of Real Life in London: On the Rambles and Adventure of Bob Tallyho, Esq. and His Cousin, the Hon. Tom Dashall through the Metropolis; Exhibiting a Living Picture of Fashionable Characters, Manners, and Amusements in High and Low Life. By an Amateur. Embellished and Illustrated with a Series of Coloured Prints, Designed and Engraved by Messrs. Heath, Alken, Dighton, Brooke, Rowlandson, &c. London: Printed for Jones & Co. This is a fun read and rife with all sorts of ideas for stories set in the Regency era. This is actually an imitation of the original work by Pierce Egan. However, this particular imitation is the one Egan is said to have favored the most. I have to agree with him.

Also on my shelf is The Annual Register, or a View of the History, Politics, and Literature, for the Year 1804 which was actually published in 1806. This is the sort of volume one would have lying about the library or the lounge of a club or anywhere someone might want to pass a few hours reading articles about various subjects as they appeared in the year noted. I cannot tell you how fascinating it is to pick up this book and immerse myself in the major, minor, and every level in between events of a single year during the Regency era.

I also have an 1818 edition of One Hundred Sixteen Sermons, Preached Out of the First Lessons at Morning and Evening Prayer, For all Sundays in the Year by William Reading, M.A. This book is especially close to my heart as it was given to me by a dear friend who knew how much I would treasure it. The inscription of the first owner is dated December 29, 1818. December 29th is my birthday. Reading the sermons probably has not made me a more pious person, but it has given me insight into the religious year and into the way people of this era practiced and thought of their faith.

I said before, there are two reasons I treasure these extant resources so very much. The second reason has nothing to do with monetary value, research value or their usefulness to me as a writer of Regency historical romances. It has to do with me as a human being. My Native American ancestors say “We are not human beings on a spiritual journey. We are spiritual beings on a human journey.”

That spiritual experience is what I have when I hold these books in my hand. When I curl up in a chair with a cup of Earl Grey and a plate of Walker’s shortbread and read the same pages someone from another time and place read I feel a connection, a tie to those long ago readers. I wonder about their lives, their hopes, and their reasons for owning and reading these books before me. When each of these books arrived, I spent a great deal of time holding it and turning it over and over again in my hands. I guess that makes me some sort of book geek, at best, and a book weirdo, at worst. Guilty as charged.

There is a reverence to the written word. Those of us who know the importance of words, of their preservation in these old books, can see as others do not the intangible connection books provide from one era to another, from one person to another, and from one soul to another. The electronic age has provided us with access to plenty of old books via inter-library loan and Google books. I do a great deal of my research this way. I confess if a book is particularly helpful I let the Harvard Bookstore print a Google book up for me. They are cute little volumes and the script and text are presented exactly as they appear in the originals.

In the end, there is simply something about holding a stalwart leather bound volume in my hand and carefully turning the pages of a book other souls thought important enough, for any number of reasons, to preserve so that I might treasure it all over again. In that moment, I understand them. Their soul speaks to mine. And as important as our connection to each other is, we can learn a great deal from our connection to those who have come before us. Old books give us that chance – to connect, to learn, and to grow on our human journey, and our spiritual one.