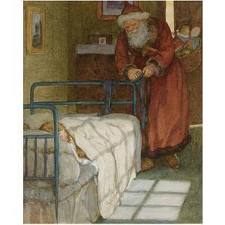 From  Christmas Cards & Their Chief Designers By Gleeson White (1894)

The origin of the Christmas card is, fortunately for its future historians, not lost in the mists of antiquity, that popular hiding place for all sorts of origins; but as clearly fixed as Archbishop Usher’s date of Creation – B.C. 4004 – with more trustworthy evidence to support it. In 1846, Sir Henry Cole (then plain Mr) suggested the idea of a specially designed form of greeting to send to friends at Christmas. Mr J. C. Horley, R.A., acting on the hint, produced a design of a trellis of rustic-work, in the Germanesque style, divided into a centre and two side panels. In the panels are figures representing two of the acts of charity, “feeding the hungry” and “clothing the naked;” in the centre is a picture of a merry family party, including three generations, grandparents to grandchildren, quaffing draughts of wine. 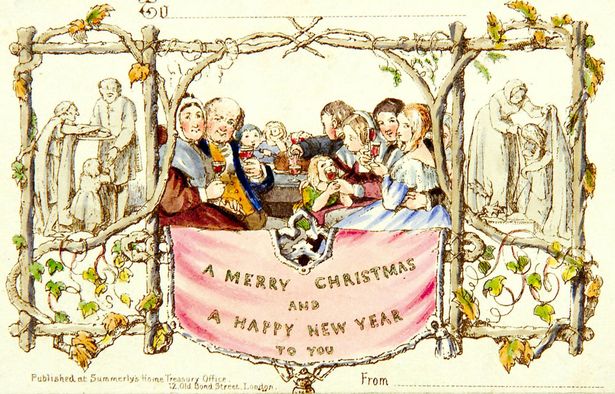 It was evident that some such individual, whether called buyer or commercial traveller, comes between the manufacturer and the retailer in almost every instance. Not only has this personage to reckon with the taste of shop-keepers, which varies from the best to the worst, with a tendency to the latter, but he has also his own standard to defend. Hence he sells most readily not only those goods the average retail trader is most likely to choose for himself, but a great many others which, since they approve themselves to the vendor, he can recommend with sincerity. It is strange that this needle’s eye, through which so much Applied Art has to pass ere it reaches the public, is not more often recognised as the chief obstacle to its progress. The public should not be held responsible for declining to purchase goods which never came under its eyes; the manufacturer should not be held blameworthy for the poor level of the Art he offers, when, possibly, he has tried and tried in vain to induce his travellers and the trade buyers to support his efforts to produce good designs. 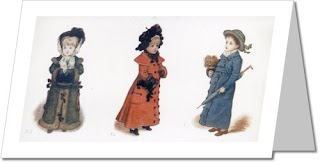 Although 1846 has been so far accepted as the undisputed date of the first card, just before going to press, Mr Jonathan King, the owner of the largest collection, has called my attention to a paragraph in a journal of some standing, where a Mr Thomas Shorrock, of Leith, is said to be the real inventor of the Christmas card, seeing that a year or two before the above date he issued one, with a laughing face, and the motto “A Gude New Year to Ye.” Whether this be the card which is elsewhere said to have been engraved on a copper- plate by a workman, Daniel Aikman, in 1840 or 1841 and published with a Scotch motto, I am unable to prove. Should either of these statements be accurate, although one might, without special pleading, claim that a New Year secular greeting is not quite the same as one marking a religious festival, it would be best to give later inventors equal credit, and assume, what would be probably correct, that neither knew of the doings of the others. 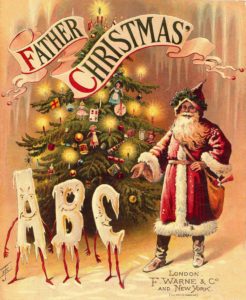 So, too, the statement that engravers’ apprentices of Northumberland or Yorkshire (the stories differ, and one questions if such a class of artists exists in either place in sufficient numbers to found a custom), are in the habit of sending specimens of their own work to friends at Christmas, and have done so for a long period, may or may not be true, but is hardly likely to have been the source whence the card was derived. Equally difficult is it to obtain any details of Messrs Goodall’s cards in 1862 (or 1864, authorities vary,) which were probably the first issued to the ordinary trade. Despite a former sentence crediting Messrs Goodall with the honour of being the first publishers of Christmas cards, (always excepting the Sir Henry Cole card of 1846,) and, notwithstanding the fact that several of their cards, issued in 1864 and 1865, from designs by C. H. Bennett, are reproduced here, it is possible that other candidates might put forward reasonable claims. 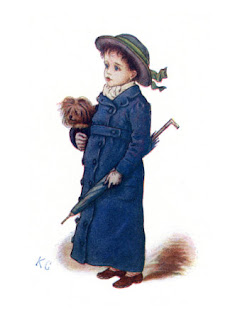 It seems probable that ornamented note paper and envelopes appeared just before the cards, that the designs in relief, identical with those on the stationery named, were either simultaneously or very shortly after stamped in the centre of a card, which had its edges coloured or embossed. Certain it is that T. Sulman was very early in the field with relief-decorated paper and cards, and with lithographed designs. Leighton, of Fleet Street, and Mansell, of Red Lion Square, are also amongst the first, while R. Canton, (who started Valentine and Birthday card production in 1840,) and Dean & Sons issued many of their publications with special Christmas mottoes. The innovation of stamping reliefs in two ormore colours is dated to 1858. The introduction of foreign “chromo-lithograph pictures,” to replace those hitherto coloured by hand, or by stencil, is traced to Elliott, of Bucklesbury, in 1850, and to Scheffer and Scheiper, (I have but the phonetic spelling of these names,) in 1851. This item in the preparation of “made-up” Birthday Cards and Valentines had hitherto been very rudely prepared by colouring plain embossed relief with a brush, or stencilling lithographs, afterwards embossed and cut out. 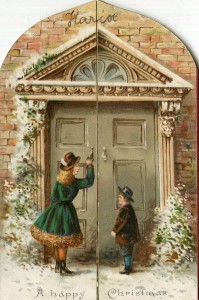 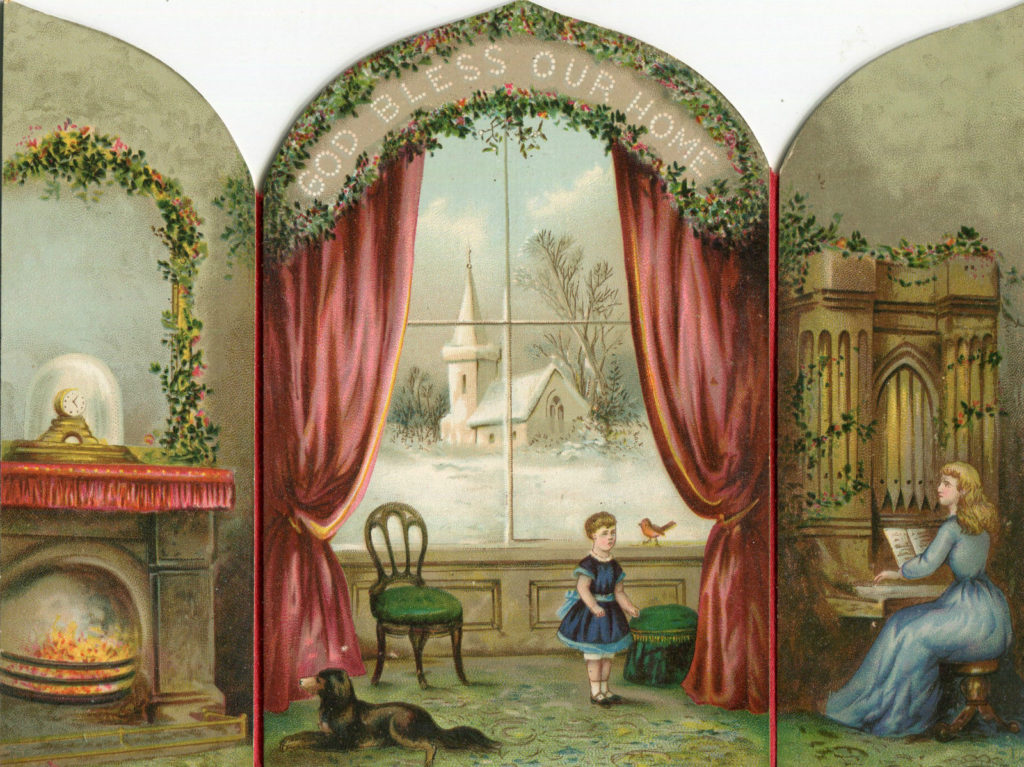 An improvement in these devices is traced to a man whose professional occupation was to colour designs upon linen bands for the Irish trade. These cut out devices were prepared at a cost of 4d. per 1,000, the hands earning about 15s. a week, until Germany sent over more cheaply produced imitations at one-sixteenth of the cost. Thierry, of Fleet Street, known as the father of the Christmas card trade, was, doubtless, the first to introduce the elaborately embossed reliefs which afterwards came over in cart loads. Then they cost 8os. per 100 sheets, now their price has fallen to 10s. the 100 for large quantities. When one remembers that at first—and for many years after- a large majority of the cards, (which, however little they interest us here, helped to spread the fashion), were made up from foreign chromo-lithographs, even by firms of the high standing of Marcus Ward, we find that this importation of foreign embossed relief takes its place as an important commercial factor in the rise of the industry. 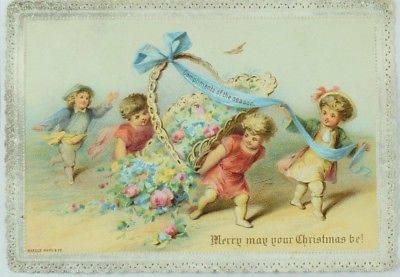 With Messrs Marcus Ward & Co., who started the production of Christmas cards as early as 1867, coincidentally with the opening of their London house, however, we come to a very different class of manufacturers. Here is a house, one of the earliest in production, with a record that reaches the highest level of decorative excellence ever touched by the Christmas card. This firm for awhile monopolised the whole of the better-class trade. Beginning with the use of German ” chromos,” usually mounted on card with lithographed borders in gold and colours, of home manufacture, they soon issued reproductions of original designs by artists of repute, and gained a position where they stood without rivals. It was, I believe, owing to the acute perception of one of the partners of this firm, Mr. William H. Ward, that Miss Kate Greenaway was “discovered” as a designer. At the earliest “Black and White” Exhibition at the Dudley Gallery Mr. Ward’s attention was drawn to Miss Greenaway’s work; and recognising that her special talent was in the direction of costume figures and dainty colours, he induced her to design for the firm.

It is this characteristic which must be reckoned to the honour of Marcus Ward’s cards; not because they employed celebrated artists more freely than other firms—capable designers indeed were commissioned, but their list of well-known painters will not compare in mere numbers for a moment with those of several of their near rivals—but because they saw that an architectural, not a pictorial, aim was the correct one. To talk of architecture in connection with so ephemeral an object as a Christmas card may sound absurd, but, nevertheless, I think all students of decoration must admit that its treatment should be more nearly allied to the surface decoration of buildings than to transcripts of nature, which are, in theory, attempts to imitate the out-look from a window of the building. This latter, usually held to be the aim of the pictorial artist, cannot be employed without degradation upon mechanically-produced reproductions in colour; but the artificial convention — the idea of decorative as distinguished from pictorial art— wherever you find it for stained glass, mosaic, enamel, inlay or colour printing, has another purpose to fulfil, which is more admirably achieved when the limitations of the material are duly observed.
Note: Alternately, the Hyperallergic site has published an article on Creepy Christmas Cards, which you’ll find here.