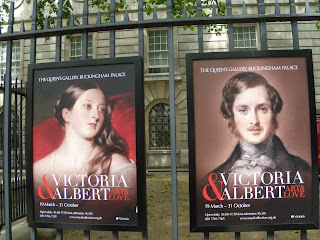 Eight years ago (!?) Victoria and I were fortunate enough to attend the Victoria & Albert exhibition in London. Over the years, we have traveled the length and breadth of England together and have had some fabulous experiences, but the one experience we always come back to is this one. It stands alone. In fact, we recently reminisced about it again when we were in England in May, so we’ve decided to run this post, which originally ran in 2010, again for anyone who missed it then.

One of the highlights of the London leg of our tour, and one of the visits Victoria and I had been most looking forward to, was the Victoria and Albert: Art and Love Exhibition at the Queen’s Gallery at Buckingham Palace. I knew it was going to be fabulous, but had no idea how deeply it would affect me.

Upon going through the security checkpoint, we ascended the stone steps to the first gallery in the Exhibition. As we entered, the first thing Victoria and I saw was the portrait below hanging on the far wall. 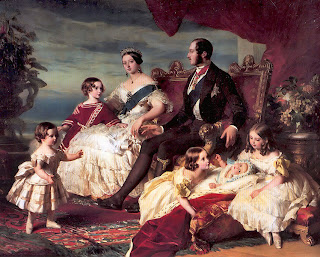 Winterhalter’s now iconic painting was intended to hang at the family retreat of Osborne House on the Isle of Wight. It was exhibited in 1847 at St James’s Palace, where it was seen by 100,000 people. However, the picture was not well received by some of the Press, who criticised its ”sensuous and fleshy” character. Having seen this image over and over in various books, and having a framed print of it in my office, it was breathtaking to realize that we were now gazing upon the original. Once I’d gotten over the initial shock, I looked around the rest of the room, only to find myself being presented with almost every well known, and loved, portrait of the Royal Family done by Winterhalter – in the flesh, so to speak. And all in the same room.  Good thing there were benches provided, as I had to sit down and collect myself. 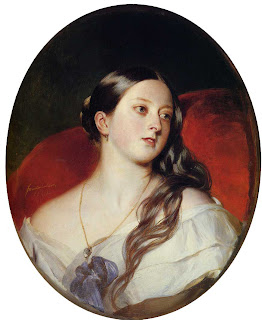 This gorgeous portrait, commissioned by Queen Victoria and given to Prince Albert on his birthday, 26 August 1843, hung on an adjoining wall. Victoria was just 24 when Winterhalter completed the painting, which was later described as her husband Albert’s “favourite picture.” It’s always been one of my favorites, too, most especially because it breaks the “Victorian” mould by showing Victoria as she was with Albert – a passionate, sensuous woman deeply in love with her Prince.
The painting above captures Queen Victoria with her cousin,Victoria of Saxe-Coburg-Saalfeld-Kohary, who was the daughter of Prince Ferdinand of Saxe-Coburg-Saalfeld and Princess Antonie de Kohary. Her father was the second son of Francis Frederick, Duke of Saxe-Coburg-Saalfeld and Augusta Reuss-Ebersdorf. She married Louis d’Orléans, Duc de Nemours, on 27 April 1840, in Saint-Cloud. Depicted with her hair down and shoulder exposed, Winterhalter again captured Victoria, the young woman, rather than Victoria, the Queen.  She looks relaxed and quite girl-ish as she sits companionably with and holds her cousin’s hand. 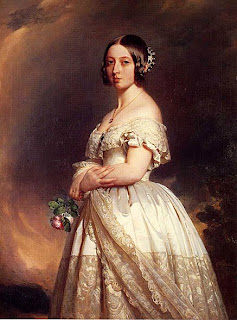 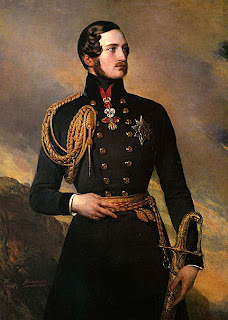 The two full length portraits above were commissioned from Winterhalter in 1842.
Yes, this painting above was also hanging in the same room. I got as close as possible to the canvas and studied the way Winterhalter had painted the fabrics, the skin tones. Truly amazing.

Queen Victoria commissioned this portait of Eos, Prince Albert’s greyhound, about which I’ve posted before. Prince Albert got Eos when he was fourteen years old and brought her with him when he moved to England. This is another print that I’ve had framed in my office for years. The subject matter, the composition and Landseer’s use of four colors – white, black, red and gold – make this a striking portrait that’s always appealed to me. Eos herself lived a fascinating life, about which I’ll be posting soon. I hadn’t realized just how large the original painting is – 111.8 x 142.9 cm. or about 4 x 5 feet. Another bench was well placed directly before this portrait and I sat gazing at it for sometime. Eventually, I did rouse myself and went to see the rest of the rooms in the Exhibition but, truly, my mind and my heart remained in the first Gallery, to which I returned after a decent interval, telling Vicky she’d find me there whenever she was ready to go.

There were so many highlights on our trip, but I’ll always be grateful for our visit to Art and Love, which gave us the opportunity to see so many of these paintings hanging beside each other. No doubt it will be a long time before that occurs again and I will always remember the special meaning that day had for both Victoria and myself.

Victoria H. chiming in here with a few more favorites from the exhibition. The catalogue says one of these apple blossom brooches was the first gift Albert sent to his fiance. In later years he added to the collection, including more gold, porcelain and enamel brooches and a wreath for the hair. Victoria always wore them on her wedding anniversary. 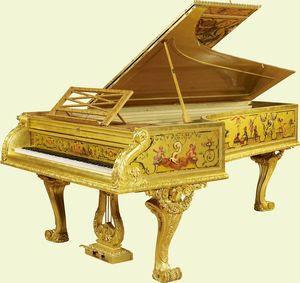 This piano of gilded, painted and varnished mahogany and other materials dates from 1856. Both Victoria and Albert played, often performing duets for themselves which Albert had written. The grand piano was designed to be a showpiece in the Buckingham Palace State Rooms. One of the most prominent persons to play it was the composer Felix Mendelssohn, who was a friend of the royal couple.
A thr 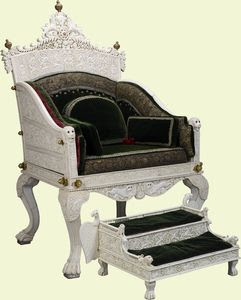 one of carved ivory with gold and gemstone decorations was shown at the Great Exhibition of 1851, presented to Queen Victoria by the Maharaja of Travancore.  In 1876, when she became Empress of India, she was pictured sitting on this throne.  The detail is amazing.  One of the guards told us that it needed to be cleaned recently and when it was being disassembled, the curators of the Royal Collection found that it was cleverly constructed to fold up entirely flat.  Made it much easier to ship from India, for sure. 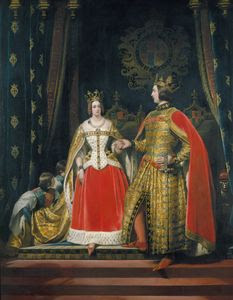 Landseer painted Victoria and Albert in their outfits for the first costume ball they held in 1842. The Buckingham Palace Throne Room was decorated with gothic tenting to delight the 2,000+ guests. Victoria is dressed as Queen Philippa of Hainault, consort of Edward III, portrayed here by Albert. The catalogue says these costumes were designed to give maximum employment to the silk weavers of Spitalfields.

Queen Victoria commissioned marble copies of her children’s forearms and feet. The carvings were based on a plaster cast made from moulds taken while the child slept. This is the hand of Victoria, Princess Royal.
We could go on almost forever about ths fascinating exhibit, but I will close with something unexpected. Neither Victoria nor Albert had a large sum of money to spend on gifts for each other. About 2,000 pounds each per year, which is not peanuts, but neither would a comparable amount in today’s values buy a Van Gogh or Monet.  So they shopped and chose very carefully, often commissioning gifts for each other based on their individual or mutual interests.  Sometimes Albert gave Victoria a song he had written and she gifted him with watercolours of their homes, favorite places and the children.
When one sees how devoted they were to each other and how they enjoyed their family life, it is easier to understand Victoria’s intense sorrow and long, long period of mourning for Albert when he died at the relatively young age of 42, leaving her a widow for 40 years until her own death in 1901.
__________________
Interested in all things Victorian? Consider joining us on the Queen Victoria Tour as we explore Her Majesty’s life, homes and long reign.

1 thought on “VICTORIA AND ALBERT – ART AND LOVE”