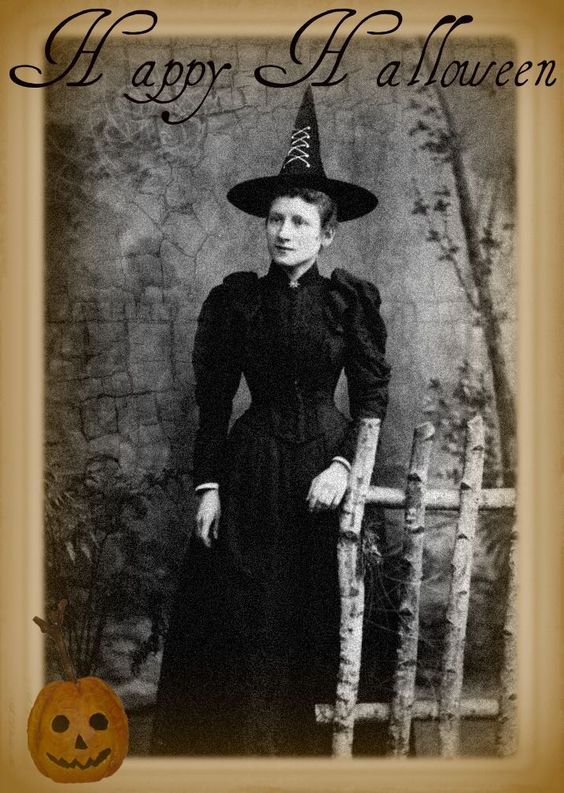 Most of the things we associate with Halloween today, i.e. ghosts, goblins, witches and evil spirits, can all be traced to superstitious Celtic beliefs over 2000 years ago. The Celts had only two seasons: Winter and Summer. Winter began on November 1st and lasted until April 30th. Therefore the last day of the Celtic calendar fell on October 31st, which is the day the Celts celebrated New Year’s Eve.

On the Eve of the Celtic New Year, October 31st, herders gathered around their campfires with their priests, called Druids, to eat, drink and be merry. This celebratory practice grew to include lighting huge bonfires in honor of the Lord of the Dead, Samhain. (Pronounced Sa-wen). Herders formed circles as they danced and howled around the fires to commemorate the approaching New Year that began on the following day, November 1st.

Because the Celts believed that at the time of year when plants withered and died was also when the Spirit World awakened and became active, to summon spirits to foretell the future became a part of their New Year’s Eve celebrations. Since evil spirits, as well as the benevolent sort, were also awakened and became especially active at this time, the practice of disguising oneself so that the evil spirits would not recognize them, came into being. This then, is the beginning of our present-day custom of donning costumes as we celebrate Halloween today, also on October 31st. 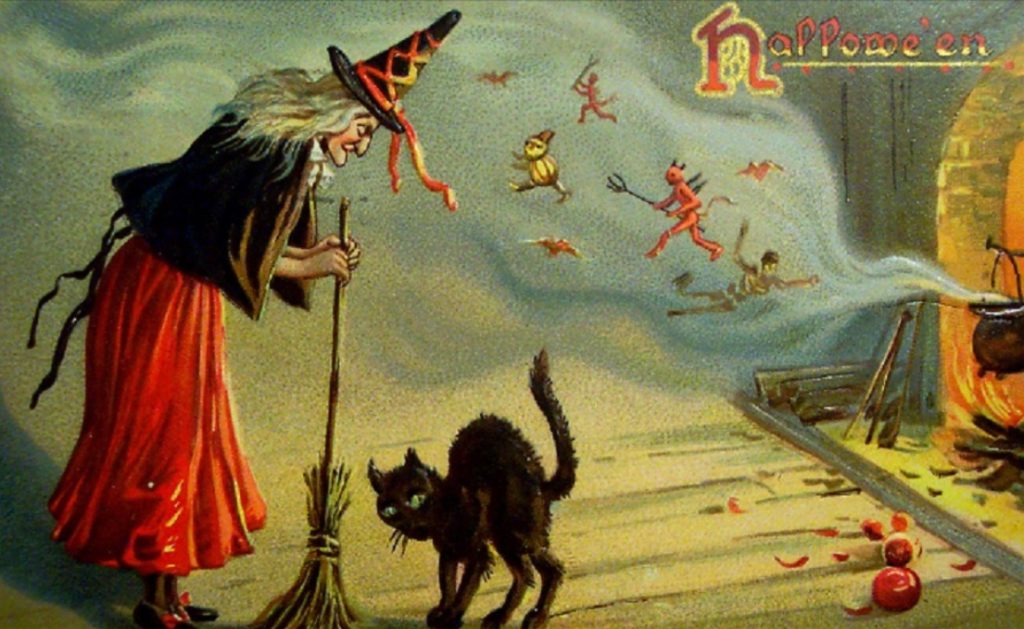 Back then, it was believed that if one left a tasty offering outside one’s doorstep, any sort of spirit-being who was lurking about might be more apt to treat that person kindly throughout the following year. The hope was that an especially tasty treat would call down good luck upon their household during the coming cold, winter months. Another reason for leaving treats outdoors was the belief that if the spirit, or soul, of one’s own dearly departed loved ones might still be hovering about, to leave them a tasty offering was a nice way of sharing the family’s harvest feast.

In many European countries, including England, groups of children and adults often went door-to-door on October 31st begging for what was called “soul cakes”, a type of bun made with flour presumably gleaned from the new harvest. A soul cake was said to commemorate all good spirits. Sometimes, fruit was also handed out with the cakes, preferably apples, which were especially favored by the Celts, who believed an apple represented immortality, love, and fertility. These All Hallow’s Eve beggars would often chant: “An apple or a pear, a plum or a cherry; or any good thing to make us merry.”

In ancient Ireland, masked children, and adults, who went begging from house-to-house often instead chanted another sort of rhyme that foretold what the Druid God, Muck Olla, would do to them if they were not rewarded with a tasty offering. Which is the forerunner of our present-day Halloween chant, “Trick or Treat!” These masked (or wily) soul cake beggars often disappeared into the night carrying cheese, butter, bread, eggs or potatoes as well as a few pennies since some homeowners hoped an offering of money would show their generosity and ensure that good luck rained down upon their household during the coming year. 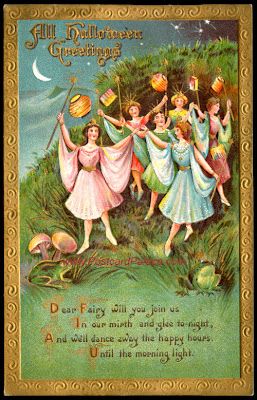 The Irish served up a bowl of “caulcannon” a concoction made from mashed potatoes, or perhaps turnips, (by the way, initially it was turnips that were carved with scary faces, instead of pumpkins) onions, cabbage and spinach. Small tokens were stirred into the pudding mixture with a generous portion of melted butter poured over the top. Everyone ate from the same bowl. The one who scooped up a miniature horseshoe in his or her spoon was assured of good luck throughout the following year. A coin predicted that wealth was in store for that lucky person. A tiny figure or doll (not surprisingly) meant that the person might soon be blessed with a child. To find the dreaded thimble, or button, meant that that unlucky soul would never marry.

Also, in Ireland, a young girl might select three nuts and designate one to represent herself. The other two were named for two of her most ardent suitors. She then placed the nuts in some type of long-handled utensil and holding it before the fire, watched the nuts burn. Whichever one burned the most steadily beside hers told her which of her suitors would be the most faithful to her. 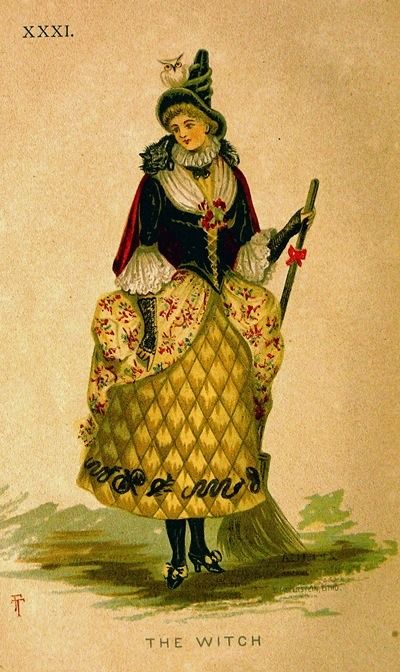 In Scotland, young couples would select a pair of nuts meant to represent themselves. Again, holding the nuts before the fire, the pair watched to see if the nuts burned to ashes together or not. If so, it meant the couple would live a long and happy married life with each other. If, however, the heated nuts began to split or crack, or even jump apart, it meant the couple were in for a long, unhappy, and quarrelsome marriage.

Unmarried Scottish ladies and gentlemen would be blindfolded and directed to pull up a cabbage or kale from the garden. A closed, white stalk indicated an elderly spouse waited in their future whereas an open, green one meant a young mate was in store for them. If one wished to know if one’s future mate would be sweet and kind, or bitter and unkind, one tasted the stalk to determine their future spouse’s temperament.

In Regency England, it was more common for those in the country to gather together in order to commemorate what they called Harvest Home, a celebration in honor of the rich fruits of their harvest. Special costumes were not worn although the ancient practice of predicting the future by holding apple seeds in one’s palm might very well have been conducted. First, one placed twelve apple seeds in the palm of one hand. While clapping that hand with the other, one repeated this rhyme: “One I love; Two I love, Three I love, I say; Four I love with all my heart; Five I cast away. Six he loves, Seven she loves, Eight they both love; Nine he comes, Ten he tarries, Eleven he courts; Twelve he marries.” When the rhyme is completed, one was to count the number of seeds left in one’s palm to determine the state of his or her future love life. 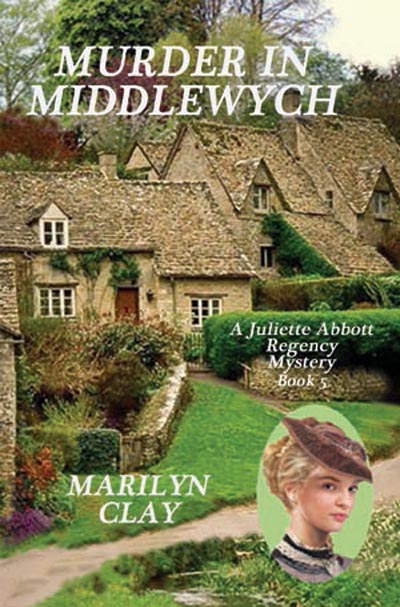 Although my new Juliette Abbott Regency Mystery Novel, Murder in Middlewych, does not include any of the above Halloween customs, ghosts, spectral sightings, dire predictions, and terrors in a haunted tunnel are in abundance.

The Middlewych Psychical Fair is slated to commence on the following day. But, when a village lass turns up dead, the local constable rushes to judgment and promptly arrests the stranger in the village, Mr. Sheridan! The tables have now turned and Miss Abbott must run the real killer to ground before her gentleman friend is hanged on the village square. Despite a Tarot card reader’s grisly prediction and deadly terrors encountered in the tunnel, will Miss Abbott be able to save Mr. Sheridan from the gallows, or must she bid good-bye to him forever and find her own way back up to London . . . without him? Oh, no!

Murder in Middlewych is now available in both Paperback and Ebook from Amazon, and in Ebook from most all other major retail sites, including Scribd and Overdrive. Retail site links include Amazon, Apple iTunes, Barnes & Noble and KOBO.

For all the Ebook links, click on the Murder in Middlewych book cover image on my website.