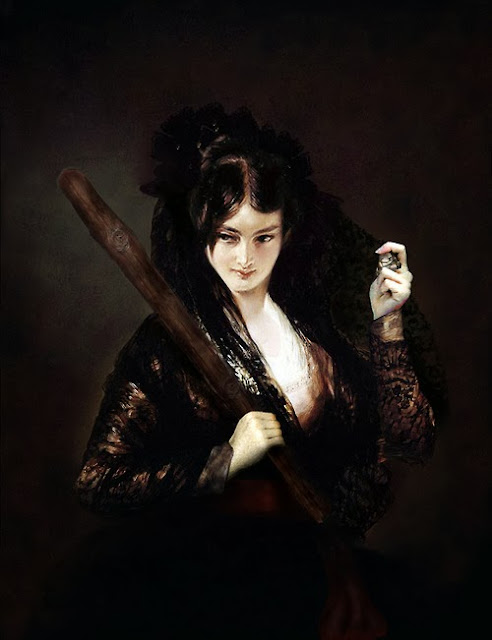 This is one of my favorite Pinterest posts because Juana Galán (1787–1812), above, was fierce, feisty and would no doubt have been a favorite of the Duke of Wellington. During the Peninsular War, twenty year old Juana worked in a tavern in her home town of Valdepeñas, Spain, when she gathered the intelligence that the French were preparing to invade the town. As most of the men were away from the town already fighting in the war against Napoleon, Juana took matters into her own hands and rallied the townswomen in order to form a battle plan of their own.

On June 6, 1808, Napoleon’s troops entered the town, whereupon the women, strategically placed in windows about the square, poured boiling water and oil over the heads of the soldiers who rode past. Juana, armed with either a baton or a cast iron stew pot (depending on which version you believe) then went into the street and beat the soldiers about their heads like there was no tomorrow. No doubt Juana had help in the pummeling, as a single person, man or woman, could not have taken on an entire regiment of French cavalry by themselves, however history credits Juana alone for the deed. The French fled and subsequently abandoned their aim of conquering the region of La Mancha altogether. Soon afterwards, the Spanish army were victorious at the Battle of Bailen against the French.

On May 2, 1810, Juana married Bartolomé Ruiz de Lerma,  with whom she had two daughters. She died during the birth of her second daughter on September 24, 1812.