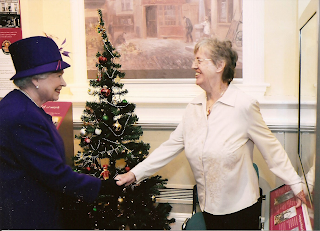 As many of our loyal readers will know, we have had a link to the new Windsor and Royal Borough in our sidebar for some time now. Our dear friend and frequent blog post contributor, Hester Davenport, was a moving force in making the Museum a reality and on Friday, December 9th, the Queen officially opened the museum, located in the Berkshire town guildhall where Prince Charles married Camilla Parker Bowles in 2005. The £300,000 museum is housed in the Maidenhead room of the 17th Century Grade I listed Windsor Guildhall.

After the official ceremony, the Queen was shown a selection of displays and was introduced to our Hester, who actually got to touch the Royal Glove, above. 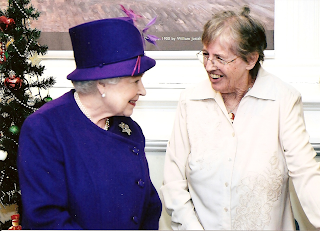 The foundation stone of the Guildhall was laid on 5 September 1687 and the extension in which the museum is housed was completed in 1830. Markets were held there until 1901 when the ground floor was enclosed. Sixty years ago, in 1951 the Queen, who was then Princess Elizabeth, opened the refurbished Windsor Guildhall.

You may recall that it was Hester who acted as our guide during the visit Vicky and I made to Windsor, but if not, you can read our blog post about the day here. It was due to Hester’s Royal knowledge that Vicky and I were able to see the Queen up close as her procession left Windsor Castle for the Ascot Races. Vicky and I are dead chuffed that Hester was able to top herself and to get thisclose to the Queen, who Hester told us confidentially seemed very nice as well as very interested in the Museum. As Hester keeps one upping herself in the Royal stakes, Vicky and I can only imagine what she’ll have in store for us on our next visit – tea at the Palace, perhaps?

Victoria here — just checking the mail for the invitation to that tea.  Not here yet!   I had another wonderful day with Hester last June, 2011, at the Museum. All the details are here.  Hester and I had a wonderful time discussing, in addition to the museum, the Queen and many other topics, our favorite authors Fanny Burney, Jane Austen, and Perdita aka Mary Robinson.

Happy 2012 to Hester and all of our readers!

1 thought on “Hester and the Queen”