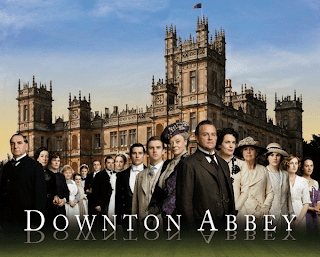 This topic will simply not go away. Are you ready for the latest? ITV has just announced that Downton Abbey – Series Two has been commissioned. The new eight-part series is expected to be broadcast next Autumn.
Unbelievable, right? Can you think of anything more unlikely – or unlikable? Well hold on to your mob caps, Downton Abbey will then return for Christmas 2011. The Christmas special will continue where the second series ends. I promise you I’m not making this up.
Gareth Neame, Executive Producer and Managing Director of Carnival Films says, “The public’s reaction to the first series of Downton Abbey was gratifying. With a combined audience of 12.8 million people tuning into the last episode we are delighted ITV have decided to return with all the main characters of Downton at Christmas.”
If that’s not bad enough, Laura Mackie, Director of Drama, ITV said: “Julian has come up with a fantastic story that will give the audience the chance to enjoy the experience of the festive season at Downton Abbey. We’re delighted to have this as part of our Christmas schedule for December 2011.” I can’t be certain, but with Fellowes writing the script, it’s a good bet that the Christmas special might feature three ghosts. And a crippled youngster named Tim. Maybe even a kid who gets his tongue frozen to a pole. A lamp shaped like a woman’s leg would be too much to hope for.
Here’s something else that’s funny (ironic, not ha-ha), “Downton Abbey premiered on ITV1 on 26th September 2010 with an aggregate audience of 11.8 million and finished on 7th November with an aggregate audience of 12.8 million (ITV1+HD+Repeat+ITV Player) making episode seven the biggest audience for an episode of a new drama series on any channel since 2003.” I am still shaking my head over these numbers.
For an absolutely screamingly funny (ha-ha, not ironic) take on Part Two, read The 7 Reasons That Series Two of Downton Abbey Will Be Even Better here.
And to round out the bashing, you can read Rachel Cooke’s reasons for being bored with DA in the New Statesman here. She sums them up rather well. If nothing else, DA has/is/will be breaking new television ground as no other show has before – it will be the first time in history that some part of the millions of those who tune in will be doing so in order to watch a programme they loathe. But which, you have to admit, can’t help but to be screamingly funny.

In the interest of both turn-around and fairplay, you can read Julian Fellowes’s take on all the DA bashing here.

4 thoughts on “Downton Abbey – The Series That Refuses to Die”